22 Trillion Reasons to Get Ready for a Market Crash

22 Trillion Reasons to Get Ready for a Market Crash 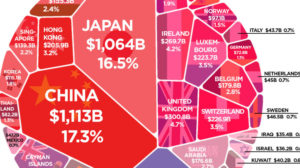 We live in strange times indeed. If you only pay attention to the mainstream media in the U.S., it would seem like everything is fine.

Corporate profits are up, home sales are up, the Dow Jones is up, and unemployment is down. Sounds good, right?

Yet, if you look just below the “surface” of propaganda-led U.S. media, things aren’t as rosy as they seem. In fact, the “linchpin” to the whole U.S. economy may just set off a chain reaction that necessitates you be ready with an exit option… starting now.

That linchpin is the U.S. debt. Right now, it sits over $22 trillion, and is well on its way to $23 trillion (potentially by the end of 2019). You can see it on the official chart below:

The total U.S. debt is terrifying, and as it continues to get out of hand it’s likely to create ripple effects in the U.S. economy that can trickle down to you. But that isn’t the scariest part.

The scariest part is that even during prosperous times like this moment, the debt is racking up $1 trillion faster than all of the GDP, every single year!

That means two important things. One, at this rate the U.S. GDP will never catch up to this annually-mounting debt, and two…

Eventually the World Will “Call” the U.S. Debt

Right now, the U.S. is enjoying the fact it can feed endlessly at the “money trough” and still get good interest rates. But as China, Japan, and the rest of the world start to worry, that could all change at the drop of a hat.

Especially with the recent inversion of a bond yield curve that puts the U.S. on the verge of another recession.

Sovereign Man highlights why you should be preparing your financial “go bag” without any hesitation:

The US government’s mountain of debt already exceeds 100% of GDP, and that number gets worse each year.

How much longer will financial markets and foreign governments continue loaning money to the US government at trivial interest rates?

So eventually the whole debt-fueled “house of cards” will come tumbling down. It’s mathematically impossible for the U.S. debt situation to get better.

The bottom line is, there are over $1 trillion reasons (and rising) every single year to be prepared for the worst economic disaster the world has seen.

And the best time to prepare is when times are GOOD, as they seem to be (for now).

The worst time to prepare is AFTER a crisis has already started. By then, it’s often too late. The shelves are bare. There’s a rush to the exits. Not everybody gets out

How to Keep Your Options and Exit’s Open

Today, it’s more important than ever to shield your money from tax collectors, governments, and central banks. It’s also critical that you safely grow your wealth.

Why should you seriously consider this

P.S. As U.S. debt climbs at a furious pace, the world is watching for the moment it can “call” their loans. Become a GWP Insiders member today and learn the secrets for protecting and growing your wealth before the U.S. ‘house of cards’ comes crashing down…

A Few Tips for US Domestic Nomads

Being a nomad doesn't mean you have to leave the […]