There are 12 “too big to fail” banks in the U.S., but the six biggest could bring down the whole economic “house of cards” if a significant correction or recession hits.

Thanks to a couple of recent reports published by the U.S. Treasury, we can see the reason why a catastrophe could happen if any one of these 12 behemoths were to fail.

You can see the list below, in order of both their total assets in dollars and their total exposures: 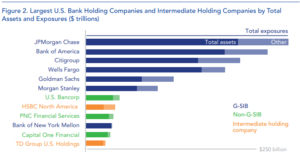 Every one of the 12 banks on the list has more than $250 billion in assets. But the top 6 have their fingers in so many economic “pies,” their failure could also blow a hole in many different parts of the U.S. economy like insurance, real estate, retirement, and more.

The top 6 banks on the list are known as “global systemically important banks” (G-SIB), with good reason. They are important not only to the U.S economic system, but also globally. JPMorgan Chase sits on top…

JPMorgan Chase & Co. isn’t just the largest bank in the world, it’s also the most likely to blow a giant hole in the economy if it fails. […] The banking giant topped almost all measures of complexity, interconnectedness with the rest of the financial system and risk exposure, with a total market exposure of $3.6 trillion.

But the entire “top 6” aren’t doing so hot according to the Treasury’s most-recent release from the Office of Financial Research (OFR) in 2018. The trouble is, they may not hold enough capital to meet minimum requirements if a recession were to hit:

And according to one “financial vulnerabilities” chart in that same report, the “market risk” of a recession appears fairly high in housing, equities, market volatility, and U.S. Treasuries like bonds: 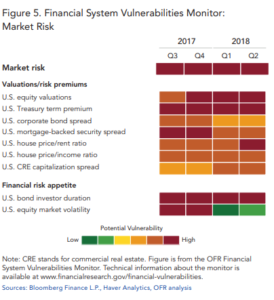 Given the extreme vulnerabilities in everything from equities to real estate, it seems like the top 6 banks in the U.S. are sitting on top of a powder-keg of market risk just waiting to blow — a great reason not to keep your money in one “basket.”

Failing Banks Are More Common Than You Think…

It’s important for most people to feel like their money is being kept in a safe place. But since 1990, it’s been getting more difficult to find a “safe place” for your money.

Here’s the scary part: If your bank is “unsafe,” you might not even know it. And if you wanted to do the research to find out if your bank is safe, it’s difficult.

Why? Because that information isn’t public:

There is no publicly available list of unsafe banks. One would think that the government should publish such a list but that can cause a run on the bank. If people feel their bank is unsafe, hundreds could race to the bank hoping to get their money out. Even if a bank was completely sound, a run on the bank could have dire consequences.

So it’s entirely possible your bank is having financial difficulties right now. It’s also possible you could wake up one morning only to find out your account is frozen or closed because your bank was shut down.

Bottom line, the biggest U.S. banks have massive amounts of exposure that could quickly turn against them. Due to the amount of leverage involved, a relatively small correction could be detrimental to any of the top six players — and put your money at risk.

How to Keep Your Options and Exits Open

Today, it’s more important than ever to shield your money from the next bank catastrophe, whether it’s yours or one of the top six. It’s also critical that you safely grow your wealth.

P.S. Any one of the top six banks in the U.S. could implode the economy. In fact, your bank could be “unsafe” as you read this. Either way, don’t make the mistake of keeping all of your eggs in one basket. Become a GWP Insiders member today and learn the secrets for protecting and growing your wealth outside of the U.S. before it’s too late…

Large, established corporations love the protections they receive from cronyism; […]