Banks’ ability to freeze an account on a political whim should have people concerned about the vulnerability of their funds. 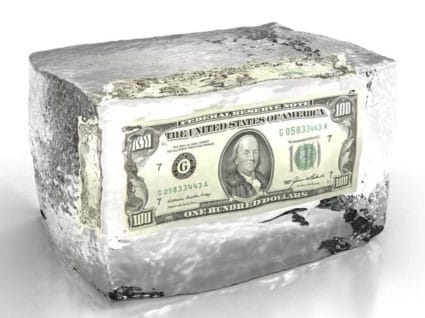 In a previous message, I outlined how Justin Trudeau escalated the trucker convoy’s peaceful protest in Canada by calling for the seizure of the trucker’s assets.

His tyrannical escalation also included seizing their children. That is an extreme measure for any Government to take; even more so since the protesters were peaceful.

That said, something else that happened drew my attention towards an eerie precedent for what could happen in the near future, even in the U.S.

Here’s what I mean…

During the chaos, $10 million in donations sent to a GoFundMe account set up for the truckers ended up taking center stage in mainstream media. Why?

As I mentioned in that previous message, GoFundMe froze the trucker’s donations and threatened to “redistribute” the funds to other charities instead of refunding it to people who donated.

But while it was fascist for GoFundMe to do this, that isn’t the worst outcome from what they did. (In fact, in this case, they ended up backtracking upon threat of an investigation from Florida, and refunded all donors).

The worst part of what GoFundMe did, is what could happen to you in the near future…

Your Bank Could Freeze Your Account for No Reason!

“What GoFundMe is doing now, your bank will be doing in 5 years.” That was a tweet sent by Texas Congressman Matt Rinaldi.

The scary part is, he could be right.

And you won’t even have to have any of the more extreme political views like you might find on Gab, espoused by nationalists like Nick Fuentes, or the outspoken Mike Lindell. They’ve already had their accounts frozen or shut down.

But if you were to protest or have an opinion that your Government didn’t like (U.S., Canada, etc.), then a future “Trudeau” could lock arms with your bank and have your funds frozen for no reason except having a different opinion.

According to digital news platform True North, Deputy PM Chrystia Freeland is going after peaceful protestors, threatening to freeze every one of their accounts just for standing up for their rights:

“The names of both individuals and entities as well as crypto wallets have been shared by the RCMP with financial institutions and accounts have been frozen and more accounts will be frozen.”

Imagine if all you had was a different opinion on an important policy than the U.S. Government did (like a forced medical procedure, for example). You’ve just seen what Trudeau and his Deputy PM have done to Canadians who stand up to them.

Now imagine if Biden did the same in the U.S., no matter what the issue was? If you wanted to voice your objection through peaceful protest, do you think he might call to have your bank and payment accounts frozen?

Keep in mind, it doesn’t really matter what side of the aisle your politics are on, or if you don’t really pay attention to politics at all. You’re still at risk.

You could end up in the wrong place at the wrong time. Or simply have the wrong thoughts. If that happens, do you want the Government to have the ability to poke around and freeze your accounts?

Today, it’s more important than ever to be able to keep your money safe from Government snoops. And I’d like to show you how to do that.

P.S. Imagine standing in a grocery checkout line, only to discover your account and credit cards were frozen and you can’t pay. All because the Government knew you had peacefully protested against them…

To help you keep your money safe, I invite you to become a GWP Insiders member and learn the strategies for keeping your banking options (and exits) open…

The global economy isn't finished with its economic shenanigans as […]