Could This U.S. State Be the Canary in the Coal Mine?

Could This U.S. State Be the Canary in the Coal Mine?

Are California’s high taxes, heavy regulations, lockdowns, and electricity rationing why many are leaving that state?  Or a blueprint for the rest of the country to follow? 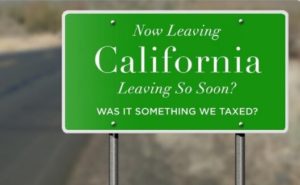 In an attempt to scare Americans about climate change, California Governor Gavin Newsom recently said his state is, “America fast-forward.”

While I’m reluctant to agree with Newsom (he’s a slimy politician), I actually think he’s right — but not because of climate change.

There are other serious problems that have taken root in California that could soon spread to other states. And, in that sense, California is America fast-forward… or, if you prefer, the proverbial canary in the coal mine.

Just look at the state’s electricity situation: the fifth largest economy in the world can’t manage to keep the lights on! And the state has to resort to rolling blackouts like some third-world country.

According to Washington Times, it’s the first time California has turned to planned power outages since 2001. These rolling blackouts were implemented as temperatures soared over 100 degrees in many locations.

In Los Angeles, residents got more nanny-state finger-wagging when the Mayor told them to turn off their appliances at 3 p.m. on September 6th. This directive included shutting off air conditioners in the middle of a triple-digit heat wave.

So what did Governor Newsom do in the midst of this? Instead of shoring up the state’s electrical infrastructure, he decided it would be better to mandate zero emission vehicles by 2035. This means taking gasoline cars off the road and replacing them with electric vehicles.

Even idiots know this is an incredibly stupid idea. If fact, instead of praising the Newsom’s idea, EPA chief Andew Wheeler panned it:

“California’s record of rolling blackouts – unprecedented in size and scope – coupled with recent requests to neighboring states for power begs the question of how you expect to run an electric car fleet that will come with significant increases in electricity demand, when you can’t even keep the lights on today.”

Of course, California’s electricity problems are only the tip of the iceberg. The state has a crumbling education system, socialist business regulations, high taxes, and “some of the worst, most incomprehensible Covid lockdowns in the country.”

For example, earlier this year a lone surfer was arrested in the ocean for violating “social distancing” rules, but the state has since given large groups of protestors a free pass to do whatever they want.

At this point, California is essentially a dystopian third world country that’s clinging to its past glory. But Californians are starting to wake up and are already leaving in droves. Hundreds of thousands could leave this year alone.

California could lower taxes to try to entice their residents to stay. But, no, they’re planning to impose a 54% tax on some millionaires, which will only accelerate the exodus of both people and jobs.

It’s a downward spiral, and California politicians seem to be dead set on driving the state into the ground as quickly as possible.

Multiple states aren’t that far behind California. With that in mind, it’s not a bad idea to start making preparations so you have the option of leaving the U.S. if “Californication” spreads coast to coast.

It’s more important than ever to keep your options open thanks to incompetent leadership in the U.S. states, especially if electricity rationing becomes more widespread.

It will also be critical for you to be able to safely grow your wealth out of the reach of government interference.

P.S. It’s always good to have a “way out” if things get nasty in the U.S. Become a GWP Insiders member today and learn the secrets for getting a second passport, leveraging offshore banking, and growing your wealth outside of the U.S. before it’s too late…