Debtors’ prisons were supposed to have gone out with the 19th century, but there is evidence that they still exist today in the United States. 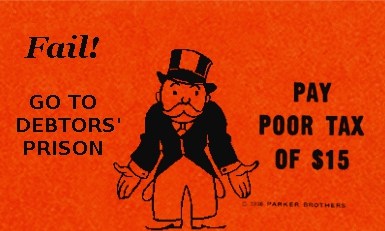 Do an internet search on debtors’ prisons, and the top searches will take you back to 19th century Western Europe. Search something like “debtors’ prison United States” and you will find something disturbingly different: multiple stories of the country’s poor rotting away in jails over fees and fines they had no chance of being able to pay.

Here’s how Wikipedia defines them:

“Destitute persons unable to pay a court-ordered judgment would be sentenced to these prisons until they had worked off their debt via labor or secured outside funds to pay the balance; the product of their labor went towards both the costs of their incarceration and their accrued debt.”

The political class uses the middle class for revenue, but it builds its careers on the backs of the poor. Think about it, if the city needs funding, it hits up the middle classman with a few $35 traffic tickets. They reluctantly pay it, so as to move on with their daily grind. The poor aren’t as quick with the cash, but they are a great target for “cracking down on crime” or “populist organizing”. Either way, the politically ambitious LOVE the career opportunities the poor unwittingly offer.

Lately, there’s been an up-tick in the amount of poor being hit with fines they can’t afford for acts that don’t warrant such a penalty in the first place.

Let’s go back to the $35 traffic ticket. You might poo-poo a ticket that small. In fact, you might even be able to argue that a poor person should be able to afford to pay it.

It’s not just the $35 for the ticket, however. It’s $35 PLUS other fees. What other fees? Well, in the state of California, for example, there is a 20% state surcharge. Then another at the county level. Then court fees. All in, your $35 ticket can cost you up to $146 out the door. I haven’t seen a $35 moving violation ticket in years… I have seen signs for $271 fines just for using the HOV lanes without the required number of passengers in it. If that equation holds, then imagine what a $271 ticket would amount to when all was said and done.

If you can’t make the payment, you pay for your own incarceration. If you aren’t incarcerated, you often pay for a private parole service until you’re paid up (as is the case in Mississippi).

I’m all for privatization. But I’m very much against fascism. Fascism is basically socialism with a privatized façade. So the Federal Reserve or Freddie Mac are examples of fascistic entities whereby the business is “privately held”, but their only customer is the government.

So everything from private prisons to private parole officers are fascistic in that they ONLY have government contracts, and their demand is solely found in the public sector by fiat.

The bigger issue is, much like civil asset forfeiture is considered “policing for profit”, these debtors’ prisons are prisons and parole for profit. The more laws and penalties there are, the more profitable these enterprises are. They are profitable and wind up funding those who run for public office that have their best interests at heart.

There’s no incentive to eliminate the war on drugs or leave victimless offenders alone. There becomes a state contrived incentive to harass the public and shake them down for just about anything.

Here are some real examples:

The argument is that these services are funded by the offenders themselves. But are they? I mean, they have no money. That’s why they are there. If it was successfully FUNDED they wouldn’t be sitting in a cell.

If the purpose of law is to keep order, and the purpose of government is to maintain a civilized society, why is there no example of such virtue being set by these governments? This isn’t about safety, civility, or order. It’s about control and funding. Is this what happens when the beast is starved? It just shakes the villagers down until it gets some loose change?

Debtors’ prisons were abolished for a reason: they were wrong.  They are still wrong.  The regression back to employing such a tactic shows how desperate the political class are for power, control, and revenue.  If these are the lengths governments are willing to go through to bleed a stone, then make no mistake: no one is immune. It might start with the poor, but it doesn’t stop with them. If speeding was really a $35 offense, then it would be $35 everywhere. But it’s not. It’s whatever the government in that particular area believes it can extract from you… and it’s never a comfortable amount.

Citizenship by Investment (CBI) Just Went on Sale in St. Kitts and Nevis

St. Kitts and Nevis have temporarily reduced the price for […]