Nationalization of private enterprise is on Elizabeth Warren’s agenda. While her bill might not pass as is, a federal corporate charter could put private corporations under federal control. 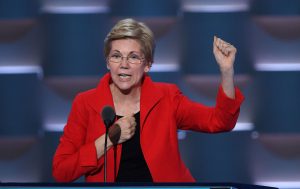 US Senator, Elizabeth Warren, proposed last summer a massive seizure of assets, and the media was relatively silent on the matter. Considering what this bill plans to do, it would have expected a little more exposure. But perhaps since seizing property has become par for the course and this is just another day in Congress. Or maybe this is just Senator Warren’s way of putting herself on the liberal map for her 2020 presidential run.

The stated purpose is to bring American corporate responsibility to a post-World War II era. I guess looking at what was actually on the books at the time and reverting back to that rather than introducing another law was not a viable option?

To hear her and others on the left describe it, it’s just upgrading corporate personhood to corporate citizenship. And what is a citizen but another word for national subject? The irony is some left leaning outlets think this measure is to “save capitalism”. As if nationalizing enterprise wasn’t already proven to be fascistic by Germany less than one hundred years ago?

I’m reminded of when George W. Bush passed TARP (Troubled Asset Relief Program) and bailed out the banks, saying, he “abandoned free market principles to save the free market system.”

According to the National Review:

“…[N]o business with more than $1 billion in revenue would be permitted to legally operate without permission from the federal government. The federal government would then dictate to these businesses the composition of their boards, the details of internal corporate governance, compensation practices, personnel policies, and much more. Naturally their political activities would be restricted, too. Senator Warren’s proposal entails the wholesale expropriation of private enterprise in the United States, and nothing less.”

By “permission” they are talking about a national charter… i.e. national corporate structure.

Right now, when you incorporate in the US, you have 50 states to pick from and various structures within those states. This provides you with choices as each jurisdiction has their pros and cons. Under this law, if a corporation exceeds $1 billion in annual revenue, they get ONE choice: the federal one.

I understand National Review is a right leaning source, so allow me to have Vox, a more leftward source, itemize some of the features, lest there be any misrepresentation:

Should this pass, this would be one of the biggest federal grabs of private holdings the US has seen. Moreover, the $1 billion annual revenue is only a placeholder. If this were to get on the books, it would be easy to vote for an amendment to lower the threshold, or to expand it to all businesses big and small.

And at what point does the government just take over and make the corporations themselves national assets much like Venezuela or China?

There is a canary in the coalmine. Vox even admits this would have a major impact on share prices:

“If imposing stakeholder responsibilities on businesses and requiring many of the seats at the biggest firms to be elected by workers pushed the S&P 500’s Q ratio down to German levels (which is probably a high estimate since German codetermination rules are somewhat tougher than her proposal), share prices could fall by 25 percent. For the vast majority of people who earn the majority of their income by working for wages, cheaper stock would be offset by higher pay and more rights at work.”

Hillary Clinton offered up a similar plan pushing for more profit-sharing initiatives, but her approach was to try and do it through the tax code and incentivize corporations to adopt those policies. Warren’s plan is far more overt.

My concern is: if this particular measure doesn’t pass – and I doubt it will as is – does a President Warren push this through? If there is no President Warren, has the seed been planted amongst other liberals in Congress to adopt a different variation? Or worse still, to bury it in some other unrelated bill about the Delta Smelt’s preservation?

All it would take is just the set-up of a federal corporate charter. That’s the lynchpin; and frankly, I could see some Republicans getting on board with that.

It would supersede state level corporations through the supremacy clause, and choices would disappear. After that, congress decides how a business runs or doesn’t, and next thing you know, there’s no such thing as private business…

The possibility is there that something resembling this, in some form, could come down the pike. If so, corporations would do well to consider the obvious work-around: inversion out of the US to another country. Remember Walgreens and Burger King both were at the precipice of doing just that. They didn’t, but the only way to keep them here is to make it illegal to go there.

Don’t wait until it’s too late.

How to Invest Safely