Election season is upon the USA, and it has become more of an emotional frenzy than a democratic process of people holding their government accountable. 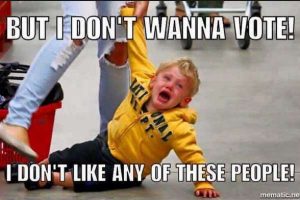 I might be an expat, but there is something to be said for being above the fray during the US midterm election season. It’s a circus, but with serious implications. It’s like some sequel to Alice in Wonderland, where seemingly benign things can throw everything for a loop.

While I remain relatively unaffected, and have no intention of voting, it is important to see where the political priorities are, and if people will follow.

Looking back on the Brett Kavanaugh hearings, I think we all caught a glimpse of what this boils down to: Distraction from Responsibilities.

If I was Kavanaugh I would’ve expected to answer for my record as a judge and legal advisor. The thing is, he has bipartisan support for his record already. Both sides would’ve had to answer for passing laws, he then interpreted as a judge, that ultimately lead to the violation of people’s right to privacy. Rather than answering for their handiwork, they decided to have Kavanaugh answer for his behavior as a teenager.

Regardless of your political stance, it was plain as day that we weren’t getting a 17-year old drunken party animal for a Supreme Court Judge. To suggest we were, or to even suggest he is still that person, is truly a reach. There was plenty of fodder to disqualify him as a SCOTUS appointee, and that was left on the table.

Now here we are, the day before Election Day, and not a single soul is talking about fiscal responsibility. This is an election entirely motivated by emotions: Panic, Worry, Fear, and Entitlement.

What topics are these candidates buzzing about?

Do those things sound important? Sure. What do they all have in common? Government control over individuals. Let me rephrase the issues:

Republicans and Democrats both like to say they denounce fascism wholesale, but that’s not true. No one is talking about reduction of any of this, by the way; just varying degrees in which the government should control it. Which means both sides believe the government is well within its rights to involve itself in these matters.

Let’s indulge the idea (despite the gag reflex it induces) that these are all things some level of government should control. As a politician, I need you to be MORE emotionally fixated on certain aspects of these issues, to distract you from their respective price tags.

I need you to be MORE panicked about shootings, than about the cost of confiscation, prosecution, and incarceration of those who just happen to be in possession of a fire arm. Safety should trump right to property.

I need you to be MORE worried about the child with Leukemia whose family can’t afford medical bills, than about the hike in your monthly premiums, and the unsustainable costs entailed in universal care. Provisions for the needy should trump solvency.

I need you to feel MORE entitled than responsible, just like me, the politician.

How could they balance Gun Control, Healthcare, and Immigration promises and even dare mention fiscal responsibility? They don’t.

No mention of the insolvency of Medicare and Social Security whatsoever. No one is talking about cutting military spending. No one is talking about reduction in foreign interventions. These are people running for congressional office, where their constitutional responsibilities are declarations of war and balancing the budget, and NOT ONE has given either so much as a hat tip!

There are also local elections happening. Gubernatorial elections, in particular, are races people don’t even think to pay attention to unless they live in that state. If you live in the US and think your Congressional House elections matter, then you better believe gubernatorial races in other states than yours matter.

“[G]overnors can wield power far outside of the boundaries they represent, especially when it comes to redistricting. Up to 29 of the governors elected this year will have the power to veto the maps that local legislatures draw after the 2020 Census. These maps could impact the eventual makeup of the House of Representatives and, in turn, which bills become laws.”

Senior counsel at the Brennan Center for Justice at NYU School of Law Michael Li says, “It actually could be the difference between having representative maps or maps that really make elections all but meaningless.”

The EU is my home base of sorts. I don’t pretend that US policy doesn’t affect me at all as an expat. It certainly does. As I said, I try to keep my life above all the political fray. I don’t vote mainly because that’s the only real choice there is anymore: Either pick who you want controlling others, or don’t.

If you are voting in the US midterm elections, may the odds be ever in your favor.  If this round of elections has you finally considering expatriation, shoot me an email.