Frexit: Is France the Next to Abandon the EU Ship?

Frexit: Is France the Next to Abandon the EU Ship?

With economic and bureaucratic frustrations mounting, France has growing support for abandoning the EU ship. 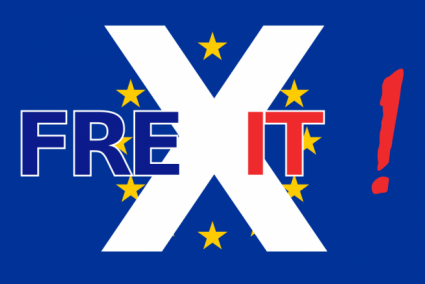 There is a French presidential candidate that is looking to push a Frexit referendum similar to that of Great Britain’s. Marine Le Pen is the leader of France’s National Front. They are considered a “far-right” party of France. Since President Francois Hollande is not going for a second term in France, and their socialist party has yet to determine a candidate, it’s hard to say how much traction any given candidate has yet.

I’m not big on the anti-immigrant rhetoric. As a digital nomad myself, I want people to be able to come and go as they please from any geography. There’s something about quartering off people into the geographic compartments they happened to be born in, and then imposing a series of paperwork, fees, and wait periods on them if they wish to get out, that just don’t quite sit right with me.

However, immigration rhetoric aside, Le Pen does believe in getting back to a sovereign France. Not only does she want out of the EU, she wants out of NATO, and she is encouraging other nations to do the same.

France has a strong Euro-skeptic population, and it’s growing due to economic issues as well as immigration issues. So much so, in fact, that leaving the EU is not a left-right matter, but a bipartisan one. Jean-Luc Mélenchon, leader of the the far-left party Front de Gauche (FG), is also encouraging an independent France from the EU. Both he and Le Pen might very well find the support they need to get out of the EU:

“More than 60% of French people view the EU unfavorably, according to the latest research by US think tank Pew Research Center.

“Over half of French voters also want their own in/out referendum on EU membership, found another survey by the University of Edinburgh.

The EU started off as somewhat of a German-French alliance. It’s nothing like that now, with Brussels at the helm and many of the big economic players assuming a more subservient role to the larger federation.

If you open up the question from asking if the French want to leave the EU to asking they want to revisit the terms, you would have even greater support. There is a certain amount of EU disenfranchisement out there, and rightly so. France was in fact one of the strongest supporters of Brexit. Many of them believed the UK would be better off; and a few thought they should just “pay the price” for leaving. Either way there was considerable support from France for UKIP’s efforts.

It’s that lack of prominence that seems to bother many of the French. The EU was a vision of German economics with French politics. Apparently, the EU is only appealing if run by Germans and French… not the Belgians.

A common frustration in Europe is the stifling bureaucracy imposed by the EU. It’s taken a toll on trade, overall economics, and made one of the strongest cases for sovereignty.

It’s funny that so many Americans can see why countries would want to leave the EU, and have little difficulty recognizing the sovereignty of each member state; but they struggle to see the same in the United States itself. It becomes suddenly unfathomable that states within the United States would want to be recognized as separate sovereign countries. Yet, that was the original purpose of the great experiment.

Left or right, it’s rather indisputable that there are multiple cultures and political leanings in the United States: all of which have no chance of being fairly represented by one president or a small legislature. When 46% of the voting population doesn’t even leave their couch, and 9% of the voting population decided the primaries, the disenfranchised sentiment runs considerably deeper in the states than in the EU.

France being the second largest economy in the EU, it would be difficult to see an enduring EU if France were to leave. Perhaps Germany, along with Austria, Belgium, Sweden, and Denmark could in theory keep the union propped up a little longer? But why? At that point, every member state going its own way and negotiating their own trade agreements just makes far more sense.

France might be the next country expected to leave, but the secession sentiment is growing. If they do leave, I expect it will be that much easier for other key players to follow. If they don’t leave, they will most definitely shine a light on reforms to their existing terms, which in all likelihood will remove the teeth of their agreement anyway.

For as much as the political elite like to push a one-world agenda, it’s not as unifying as it sounds. Forced associations never end well. Whether you’re forcing different cultures together, or forcing someone to bake someone else a cake, it only leads to resentment. The tighter the EU holds on and the deeper it digs its heels, the less likely people will be to stick around.

I look forward to watching how the elections go in France this year. Since Frexit isn’t a partisan issue out there, it seems like the country is heading for an inevitable referendum. They will have trade allies in the UK, Norway, Iceland, and Switzerland. This could be the next brick to fall from the EU bloc, and I’m glad.