The fiscal policies of the Federal Reserve could be driving more people toward cryptocurrencies, as the US seems incurably codependent on Fed intervention. 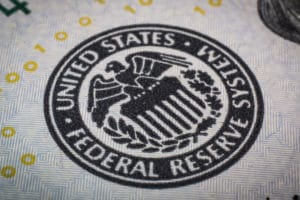 Thanksgiving is a time to show appreciation for what you have. Your loved ones, your health, and even your material abundance. People who work for it, know that it represents their effort. Those who don’t work for it, tend not to appreciate it as much.

Earned wealth contributes to the health of an economy. It’s indicative of productivity.

Printed wealth, on the other hand, is indicative of an imminent financial crisis. It’s also the express lane to reaching critical mass.

There is bipartisan agreement that deficit spending and QE (quantitative easing) are acceptable practices. 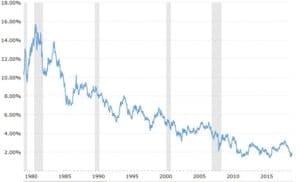 The US slowly crept lower and lower on its interest rates, for one reason or another.  Even when it wasn’t necessary, in the 90s, interest rates would drop as a political move to stimulate job growth.  Admittedly, there were a couple of major events in the past 30 years which prompted Fed intervention: 9/11 and the financial crisis of 2008.

While there seemed to be some recovery from 9/11, the interest rates are still as low as 2009.  So in ten years the US has not recovered any value in the dollar, there’s been more frequent injections of money into the system, and no one is asking why.
Agree or disagree with Trump, I think the question needs to be put to him: if the economy is so great, why is the Fed still suppressing the interest rate and printing more money?

The short version is: the US cannot seem to get itself out of the low interest ruts it gets itself into. Maybe it’s become much more difficult politically to be the guy who says raise the interest rates and stop printing.  Either way, the trajectory is clear.

In addition to devaluing the dollar through low interest rates, the Fed is also printing. The most recent round happened the Wednesday before Thanksgiving on November 27th, 2019. The NY Fed pumped another $108 billion into the money supply despite warnings from economists within the St. Louis Fed.

“The central bank has slashed interest rates multiple times during the last few months and injected more than $270 billion to the balance sheet since September… To tackle this issue the central bank has been injecting billions into the economy using repurchase agreements (also known as repos) with primary dealers, which are authorized by the Federal Open Market Committee (FOMC). Essentially, the Federal Reserve purchases massive amounts of securities and Treasuries in order to adjust the supply of reserve balances. The New York Fed calls the practice ‘fine-tuning the supply of reserves in the system.’”

A known critic of the Federal Reserve and QE, Peter Schiff said of this latest round of money printing:

The US economy depends heavily on two things: a very precarious relationship with Saudi Arabia, and constant interference from the Federal Reserve.

When the Federal Reserve meddles in economic affairs, the most that will come of it is a can getting kicked down the road for a later time. It’s only tools are theft and debt. It steals in the form of inflation and prints money by monetizing debt.

“The unemployment rate peaked at 11.7 percent in 1921. But it had dropped to 6.7 percent by the following year and was down to 2.4 percent by 1923. After the depression, the United States proceeded to enjoy the “Roaring Twenties,” arguably the most prosperous decade in the country’s history. Some of this prosperity was illusory—itself the result of subsequent Fed inflation—but nonetheless the 1920–1921 depression “purged the rottenness out of the system” and provided a solid framework for sustainable growth.”

The latter was protracted by Fed and government intervention. Whereas, the earlier depression corrected itself in about 3 years, this depression worsened to a staggering 25% unemployment rate three years in.

Policies like these are what lead to greater internet searches on cryptocurrencies and precious metals. Crypto popularity isn’t unfounded. It went from a novelty to a true alternative to fiat currency in many places.

Recently, Virgil Griffith an American coder, was arrested for teaching North Koreans how to evade sanctions using cryptocurrency. Argentina has been a quick adopter of crytpo due to the restrictions placed on the “blue dollar” or US dollar. They look to crypto as a way around SWIFT and actually settled an export deal with Paraguay using Bitcoin.

Just this past September, New Zealand became the first country to allow salary payments to be paid in cryptocurrency:

“The decision was originally filed in an August 7 note, which also detailed New Zealand’s plans to allow for bonuses to be paid in cryptocurrency. The salary option will still fall under the nation’s income tax scheme, and the ruling excludes self-employed workers from switching their income to cryptocurrency.”

Unbanked areas, along with less stable areas of the world are taking to crypto currency as an affordable and safe means of exchanging value. Several African countries — including Kenya, Ghana, South Africa, Nigeria, and unsurprisingly Zimbabwe — have adopted cryptocurrencies.

Government monopolies on money have made crypto currencies an appealing alternative to those in more dire straights. But even in places like the US and New Zealand, people are opting for crypto, even if it is just a hedge against the dollar or an investment.

The fact is, the US is on an irreversible path in terms of its monetary policies. It’s not a matter of if things will go sideways, but when. Are you exploring options in crypto or precious metals? If diversifying out of the US dollar is a goal for you, let’s set up a consultation to review some options.

The Rigged Battle of Asset Forfeiture

Asset forfeiture has ensnared a lot of innocent people in […]