Has President Biden Crossed the Rubicon?

Has President Biden Crossed the Rubicon?

The “Dark Brandon” speech had Joe Biden calling 71 million Americans “extremists”, and turning the FBI on Americans for aligning with Trump. 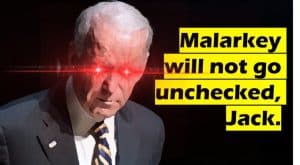 Historically, authoritarian governments have generally followed a certain pattern. Capitalize on a crisis, get public buy-in, and install the regime.

One of the things that happens during the “crisis phase” or while “getting public buy-in,” is the leader of the regime publicly declares a large part of the public as an “enemy.”

The Nazis labeled Jews the enemy. Stalin labeled the “farmers” the enemy. Mao labeled dissenters from his “Great Leap Forward” as enemies.

Tens of millions of people died as a result of these regimes. In fact, the mainstream corporate media helped each time (see the NYT’s Walter Duranty as one example).

The bottom line is this: As soon as a nation’s leader starts publicly threatening his political opponents – and then using the force of government to back up those threats – the writing is on the wall.

What would it look like if a U.S. President did such a thing? Well, it would look a lot like what’s happening right now.

But there’s no way that could happen in the United States, could it? President Joe Biden wouldn’t target his political opponents while “building back better” … would he?

Clearly, the answer is yes, he would. And for proof look no further than his recent statements and the actions of the federal government.

In a speech delivered by President Biden on September 1st, 2022, he effectively called the 71 million people who voted for Trump in the 2020 election “extremists.”

Reuters provided the key parts of the transcript for the speech, and the most alarming part was the threatening nature of the entire speech (which was supposed to unify, not divide).

Over 71 million people voted for Trump, so in effect, Biden was insinuating these ordinary citizens were “extremists” in his speech.

That means if you voted for Trump, then you could potentially fall into the “extremist” category that Biden was trying to single out.

But is Biden willing to follow through on his threats? Again, the answer appears to be yes…

Biden Turns to FBI to Carry Out his Dirty Work

Recently, the FBI has been weaponized against Biden’s political opponents.

First, in an unprecedented move, the FBI raided Donald Trump’s home in Mar-a-Lago. This is something that’s never been done to a former President.

More recently, FBI agents surrounded Mike Lindell (“The Pillow Guy”) in a Hardee’s drive-thru and seized his phone! This seizure appears to be politically motivated due to Lindell’s affiliation with Trump and his claims that the 2020 election was stolen.

Is it a crime now to have opinions that differ from the politicians who are currently in power? If so, we’re living in the early stages of a dangerous authoritarian government.

And if this political targeting continues, expect the federal government’s dragnet to widen as the ruling power seeks to intimidate and silence any opposition.

Who knows what Biden or his handlers are capable of next? This is a very real concern, especially if you think you might already be on any list of so-called “extremists.” (I’m probably already on one, lol.)

But no matter where you fall on the political spectrum, a dangerous precedent is being set right now. That’s why I strongly suggest you make sure your money is in a safe place, where you can get to it, but “The Powers That Be” can’t…

If authoritarianism takes root in the U.S. – and whoever’s in the White House decides to target their political opponents – you have to be ready. After all, your privacy, your wealth, and your freedom are at stake.

That’s why you should take steps to safeguard your money before the Feds try to put their grubby little paws on it.

P.S. Before Biden or any other Government official orders the FBI to come knocking, you need to be prepared by having some of your assets tucked away in a safe place…

Things that were once common place or even benign now […]