If Hyperinflation Hits the U.S. It Will Already Be Too Late…

If Hyperinflation Hits the U.S. It Will Already Be Too Late…

The level of hyperinflation the US is heading toward might not be one that can be avoided or corrected if they stay on this trajectory. 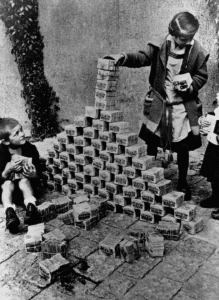 Inflation is bad when it’s allowed to get out of control. Hyperinflation is worse, something Jim Rickards defined as “when prices increase 50% or more in a single month.”

And once that horse is out of the barn, things can get really dicey, really fast. For example, out-of-control hyperinflation happened in the Weimar Republic just before World War II.

The image on the right shows stacks of “Notgeld” ready for distribution because the state couldn’t print bank notes fast enough. (Starting to sound familiar)?

To put this in perspective today, imagine if one loaf of bread in the U.S. cost $10,000. And imagine being willing to pay that much because the bread had more value to you than the stack of cash.

Citizens in the U.S. might think that $50.00 for a gallon of gas would be impossible. But citizens of Weimar-era Germany probably thought that too, before their currency ended up becoming close to worthless for about nine years.

Could we be looking at fifty-dollar gas in the next couple of years? One man thinks so. In a now-deleted Tweet storm, infamous “Big Short” investor Michael Burry warned that the U.S. is headed straight for Weimar-style hyperinflation.

What Happens When You Can’t Even Buy an Airplane Ticket?

According to Burry: “[…] all the marks that existed in the world in the summer of 1922 were not worth enough, by November of 1923, to buy a single newspaper or a tram ticket.”

That means there was so much money in circulation that it wasn’t worth the paper it was printed on. That’s exactly what could happen in the U.S., if hyperinflation happens.

In a now-deleted tweet, Burry explained how the U.S. is laying the groundwork for what could be catastrophic times to come:

If you couldn’t buy a “tram ticket” in 1923, during a similar hyperinflationary period today you wouldn’t even be able to buy an airplane ticket, no matter how many U.S. dollars you had.

(By the way, that’s a good reason to hug your gold, if you have any.)

And if you think this outrageous inflation will take many years to develop, please be aware that…

It Can Sneak Up On You Faster Than You Think!

Here’s why: Inflation speeds up over time. It’s a geometric process. Jim Rickards explains how this happens: “As inflation velocity spikes up, expectations of more inflation grow, and the process accelerates and feeds on itself.”

Once hyperinflation sets in, it’s too late for you to react. Rickards lays out the potential case for a U.S. dollar that’s worth nothing more than kindling:

“The monthly 50% increase soon becomes 100%, then 1,000%, etc., until the real value of the currency is utterly destroyed. Beyond that point, the currency ceases to function as a currency and becomes litter, good only for wallpaper or starting fires.”

When that scale of hyperinflation happens, society starts to collapse fairly quickly. Increased starvation, depression, suicide, and other forms of strife persist until things settle down.

In Weimar, that meant two years of peak inflation following a few years of “warm up” inflation. The U.S. economy is much larger and, for now, the dollar is still the global reserve currency. But things could change quickly. And you don’t have to be a rocket scientist to imagine how a dollar collapse could create financial tsunamis around the world.

P.S. Don’t wait for inflation to skyrocket in America before you start planning your escape. You’ll need to build your “global escape hatch” before you need it…

Stimulus checks, inflation, debt, and heavy regulations on employment and […]