IMF Wants to Monitor Your Internet Searches (See Why)

IMF Wants to Monitor Your Internet Searches (See Why)

The IMF is considering a system similar to that in China: a social credit system based on internet usage and searches.  But is this just a huge data grab? 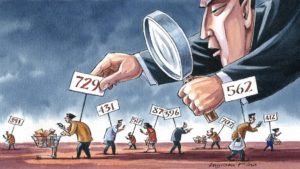 In an episode of the popular Netflix original Black Mirror, titled “Nosedive,” people can rate each other from one to five stars for every interaction they have, which can impact their socioeconomic status.

If the idea that other people could (with one click) rate your liberties, your life, and your lawful pursuit of happiness out of existence seems creepy … that’s because it is.

But even worse, the IMF (International Monetary Fund) wants to turn the idea of a social credit system into a reality.

To make this liberty-stealing idea more palatable, the IMF employs the smokescreen of “necessity,” claiming it needs to compete with next year’s Facebook crypto as one reason to take a peek at what you search for on the Internet.

The IMF innocently claims this data can help banks provide access to credit for people with little credit history.

But the reality is much darker, should the IMF get its way…

Twitter, Facebook, and other “monopoly-like” technology platforms have recently come under fire for banning people with particular political viewpoints.

Of course, you can make the case that these companies should be able to operate their business as they see fit. But no matter what you think about their decision to remove users, it does set a dangerous precedent.

If you have political ideas those banks don’t like, or if you criticize them by leaving a bad review, they (or the Government) could use your search history to cut you off from your money.

In fact, JP Morgan and Chase bank have already been accused of closing accounts of conservative customers in the U.S. for much less.

So if you give these banks access to your search history, the U.S. could see a more widespread repeat of Operation Choke Point.

Not to mention, if the “social credit system” is implemented in the U.S., much like it already is in China, your access to basic financial services could be put in jeopardy.

Your entire social standing could be based on your search history, or any other private data the IMF and large banks gain access to.

If the COVID-19 pandemic has taught us anything, it’s that once we relinquish our liberties to technocrats, bureaucrats, or autocrats … it’s tough to get them back.

Discover the Secrets of Location Independence

P.S. You can count on power-hungry oligarchs to find new ways to “box you in” so they can rob you of your liberties. So you need an exit plan, before it’s too late…