If your excuse to defer location independence is affordability, get ready to learn why you can’t afford to put it off another day.

Every week I talk to digital nomads, location independent entrepreneurs, freelancers, expats and those that would love to change their lifestyle to be among the aforementioned.

Oftentimes, those on the fence about making the switch say, “I’ll do that when I can afford it.”

Today, I am going to unequivocally destroy the myth that you cannot afford it.

In fact, I’m going to prove that you cannot afford to NOT become an expat or digital nomad.

To keep it simple, I’ll standardize everything in US Dollars.  And for the sake of this discussion, I will assume you already have a location independent income either from a job or your own business.

Now, allow me to demonstrate how living as a perpetual tourist can accelerate your accumulation of wealth and help you grow it quite dramatically.

In our first hypothetical example, we have Bill.  Bill is an American and earns (pre-tax) $150,000 per year.  Bill owns his own business and works remotely as does the rest of his team.

We can conservatively assume that between the FICA taxes, and state and federal income taxes, Bill pays at least 33% income tax, or $50,000.

Now let’s assume Bill finds Global Wealth Protection and becomes a GWPInsiders.com member (gratuitous and unapologetic self promotion) and decides to embark on his plan to move abroad and live as a perpetual tourist.

As part of his plan, Bill decides to get residency in a Tier 2 country that only taxes residents on territorial income.  This means that Bill would owe no income taxes to his new home country.

By acquiring residency in this Tier 2 country, this would also allow Bill to claim the Foreign Earned Income Exclusion (FEIE) in the US.  The FEIE allows Bill to earn approximately $110,000 tax free, plus he can claim a tax free housing allowance of approximately $40,000, thus he would be exempt from paying 100% of his income tax in the US.

By taking a few steps to restructure his business and move his company base of operations offshore, Bill can now receive his salary from a non-US company which would then mean he no longer needs to pay the social taxes in the US either making him 100% tax free, and 100% legal.

Now that Bill is saving $50,000 per year, what ever will he do with this newfound windfall of un-stolen funds?

Before we get to that, let’s also consider Bill’s new life.  By moving outside the US, in addition to the tax savings, he can also enjoy a significant decrease in cost of living in most countries around the world.

Granted, in this situation Bill did not move to Switzerland, Norway, Hong Kong, Singapore, London, or many of the other high cost of living places.  For simplicity, let’s assume Bill moved to a country he found safe, comfortable, inviting and with a 20% savings on his cost of  living.

In this example, Bill started in year 0 with no savings, but with his tax savings of $50,000 he decided to invest it at a rate of 10% (relax your email reply finger, this is only for purposes of making an example).

As you can see, in the chart below, after 10 more years of investing his $50,000 tax savings at 10% he has accumulated more than $1,000,000 in assets.  And this assumes he does not also reinvest his $20,000 cost of living savings as well and uses that money for things like plane tickets to fly back to the US to visit friends and family. 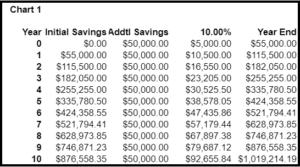 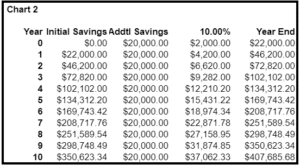 Going back to the beginning of this article, note that most of the rebuttals I get against moving abroad as an expat or digital nomad revolve around “I cannot afford it” or “I’ll do it when I save up enough money”, excuses.

In truth, Bill cannot afford to NOT do it.  The dramatic negative impact to his current quality of life and his ability to grow his wealth is undeniable.

Let’s consider one more example.  This time, we’ll discuss Bill from Germany (yeah, I’m being lazy with names today… so sue me).

In this case, let’s say German Bill also earns $150,000 per year and has joined GWPInsiders.com (shameless plug) and decided to become an expat or digital nomad.

Here’s the cool part.  German Bill can do the same thing as American Bill, but with much more ease.

The US is one of only two countries in the world that fall into the Tier 4 tax system: citizenship based taxation.

Whereas American Bill can easily get about $150,000 tax free as a digital nomad or expat, he would be taxed on investment profits or any excess earnings above that threshold.

But German Bill can rather easily exit the German tax system with a few simple steps and once he is no longer a tax resident, he no longer needs to file or pay taxes at all to the German tax authorities.

And German Bill is in good company because the majority of the world falls into this category making it quite easy for most people to exit the tax system of their home country and become a digital nomad or expat, eliminating or at least minimizing their tax burden with proper planning and structure.

I don’t need to continue doing excel spreadsheets for you to get the picture and see how much it can cost German Bill to NOT become an expat or digital nomad.

Lock-downs, Protests, and Beyond

Protests rolling out around the world, highlighting a betrayal of […]