More evidence of a global demand for decentralization: Russia opens up its alternative to SWIFT to international partners. 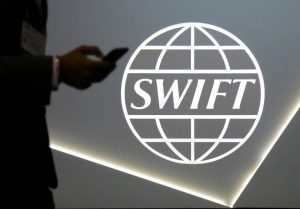 Last week we discussed how individual freedom is helped by decentralization technology. But really that is the entire premise behind capitalism, the free market, and individual freedom: that with greater choice and competition, comes greater freedom.

This isn’t to detract from last week’s claims, but rather another chapter in how forced monopolies have terrible implications for individual freedom. There’s a little quote that is often attributed to Ron Paul: “Don’t Steal, The Government Hates Competition”.

The truth is, the government hates competition of any sort. That’s why when YOU print money out of thin air, that’s called counterfeiting; but when the Fed does it, it’s called Quantitative Easing. But if you think theft and money printing are the only monopolies governments care about, think again.

If you look at all the areas where the government “allows” a little competition, it’s not without first getting its cut. Look at education, for example. Sure, you can have your private schools… but you still pay into the public-school system.

Investopedia offers a simple explanation for what SWIFT does: “It is a messaging network that financial institutions use to securely transmit information and instructions through a standardized system of codes.”

While the majority of its messages are for payment-based transactions, but 43% of its transactions are now securities based as well, while another 7% or so are treasury transactions.

No other service has offered the scalability and versatility that SWIFT has. Where governments (especially the US government) have taken a particular interest is in their compliance services where they help to enforce sanctions and anti-money laundering efforts.

They are not only integral on those fronts but are the basis for how FATCA can even have any teeth in the first place.

Being the biggest comes with its privileges. So, when I say that the US maintains control over transactions using SWIFT, I’m not kidding. The NSA monitors SWIFT transactions, which was one of many revelations from Edward Snowden.

The US has intercepted transactions between two foreign countries using SWIFT. The US used its influence to impose financial sanctions on Iran and Cuba.

Now the EU finds itself in a precarious and delicate situation. It doesn’t agree with the sanctions against Iran and is desperately seeking a work-around. Cryptocurrencies could be a solution here, but

Theoretically, the EU could come up with an alternative to SWIFT, but then that could create even more tension than there already is between the US and the EU. The EU could look to China to keep Iran going through their purchases of crude, but that isn’t totally reliable given some of the trends that country’s economy has seen.

“China has the necessary independent system for this if it so chooses to use it. But that’s the direct effect of the US weaponization of interdependence and choke points such as SWIFT. The EU played along as long as it was in its interest and now it’s biting back as secondary sanctions target EU and its key foreign policy interests.”

The weaponization of interdependence has to do with the US standing as the global reserve currency:

“Validating European concerns that the US can and will weaponize the dollar at will and use the reserve currency as a global bargaining chip, [Treasury Secretary, Steven] Mnuchin’s threats confirmed that although the United States does not hold a majority on SWIFT’s board of directors, the Trump administration could impose penalties on SWIFT unless it disconnects from Iran, pressuring it to comply with US demands.”

SWIFT is based in Belgium and is supposed to be politically neutral. But it’s painfully obvious that the US Treasury pulls its strings. It’s fairly obvious the WORLD needs an alternative.

About four years ago, Russia realized their own need for an alternative to SWIFT due to the international sanctions leveled upon them during the annexation of Crimea. Fast forward to Fall of 2018:

“Today, the Russian alternative, known as the System for Transfer of Financial Messages, has attracted a modest amount of support within the Russian business community, with 416 Russian companies having joined as of September, including the Russian Federal Treasury and large state corporations like Gazprom Neft and Rosneft.

“[I]t appears the system has reached another milestone in its development: It’s ready to take on international partners in the quest to de-dollarize and end the US’s leverage over the international financial system.”

Russia’s on-again off-again sanctioned relationship with the United States is certainly one reason for this demand, but the fact that the US pulled out of the Iran deal, followed that up with ultimatums to the EU to follow suit or else, and then followed that up with tariffs means the EU is listening to options.

Those options need not originate out of the EU.

The irony of governments seeing the value in decentralization is not lost on me. But if in fact a viable alternative to SWIFT surfaces, that will bring about some very positive changes for the global economy, but also, at the individual level, some potential benefits for offshore banking.

Technology has been the key to freedom and economic equality […]