Yet another feature to the smartphone has been added to track users, and that collected data is sold to the government to avoid obtaining a warrant. 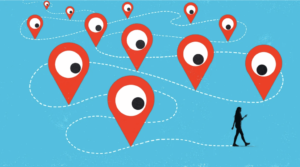 Just a few years ago, anyone who warned that “Big Brother is watching” was mocked, called a conspiracy theorist, and told to put on a “tin foil hat.”

Almost no one believed a centralized Government would do such a thing to its own citizens — especially in a “free country” like the U.S.

Then, in 2013, Snowden proved without a doubt that the people wearing “tin foil hats” were 100% correct. Big Brother (or the NSA, as we call it) is in fact closely watching and monitoring American citizens.

But U.S. citizens still had their 4th Amendment right to privacy against unreasonable searches and seizures without a warrant. Until now, that is…

An app based tool that sounds like it’s straight out of a dystopian sci-fi novel appears to be bypassing the Constitution. It’s called Locate X, and it was created by a Virginia-based company called Babel Street:

U.S. law enforcement agencies signed millions of dollars worth of contracts with a Virginia company after it rolled out a powerful tool that uses data from popular mobile apps to track the movement of people’s cell phones, according to federal contracting records and six people familiar with the software.

As always, when a Government wants to invade the privacy of its citizens, it usually uses some form of “security” or “safety” both as pretext and justification.

Remember when George W. Bush kept using “national security” to justify the Administration’s actions to install the Patriot Act after 9/11? Or when Obama used the same type of pretext while denying the NSA was spying on citizens?

It goes without saying that for specific and limited purposes, a tracking feature like this could be used for good (kidnappings, car bombings, etc.). The problem is, the State will almost always expand its reach, and almost never gives up any power it gets.

Even a U.S. Supreme Court ruling states the Government needs a warrant to track citizens with their own smartphones. But now that Locate X is available, the Government is simply ignoring legal precedent.

In fact, before being reported by Protocol, Babel Street was hiding the U.S. Government’s questionable practices:

Babel Street has kept Locate X a secret, not mentioning it in public-facing marketing materials and stipulating in federal contracts that even the existence of the data is “confidential information.”

And what’s worse, the Government appears to be using their checkbook to do an “end around” on your rights to privacy.

The Government is Buying Your Data from Babel Street!

According to Protocol: “Taken together, the revelations suggest that the sale of personal location data from commercial firms to the government is more widespread and has been going on longer than previously known.”

What it means: When you turn your smartphone on, you just don’t know how you’re being tracked or where that data is being transmitted.

Babel Street, which registered the patent for Locate X and profited extremely well from at least four new U.S. Government contracts immediately afterwards, doesn’t sound like a trustworthy place to do business.

But you don’t have a choice as a consumer of a completely different product (your smartphone). Your phone apps could have “Locate X” hitching a ride, and watching your every movement without your knowledge.

The U.S. Government can then buy your data and watch your movements like a hawk.

And if you think the data collected is harmless, keep in mind your movement can be traced back to you, even if “nameless data” is collected about your movement.

Perhaps we should all consider turning the things off, permanently? And taking back control of our data by not giving it to them in the first place?

How to Remove Yourself from Public Databases

It should be clear from the above that there are public databases that track your exact location, eating habits, spending habits, your income, your online habits, and many other parts of your private life.

P.S. Your private data is being trafficked thanks to companies like Babel Street, and if you do nothing your privacy could all but disappear. So you need to read my report before it’s too late…

More politicians have their sights on restricting and regulating gig […]