Socialism Comes at the Cost of Individual Freedom

Socialism Comes at the Cost of Individual Freedom

Socialism is the racket that over promises and under delivers, but when it inevitably fails to keep its promises, it comes at the cost of individual freedom. 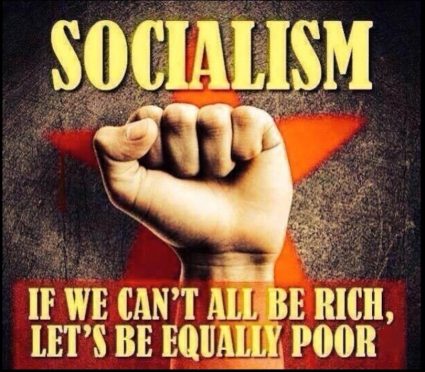 Capitalists are often admonished for being heartless and uncaring because they flatly reject socialist solutions to economic and social problems. It’s not that we disagree on the identity of the problem. In fact, we are often in agreement.

Capitalists don’t thrive on ignorance, violence and poverty. It’s the epitome of laziness to presume that if there is disagreement on the solution then someone simply doesn’t care.

I believe socialists do care, but their solutions are proven, time and again to fail. Republican or Democrat, the mere idea that bad things can be prevented through codification is either hubris gone amok or economic ignorance. It’s no wonder libertarians liken statism to a religion. Statists truly do believe that if government writes it into law that is tantamount to God speaking it into the universe.

Look at prohibition. Thou shalt not drink alcohol! Thou shalt not smoke the devil’s lettuce! Thou shalt not possess certain firearms! More people die from these policies and their subsequent moral hazards than were intended to be saved. Yet statists insist we are better off with these laws than without.

Only last week we showed what licensure laws do to the least among us trying to get ahead. Thou shalt seek the permission of thine Government to engage in commerce!

All in the name of safety, law, and order. Freedom is the price we pay for a civilized society, I guess.

Remember Franklin Roosevelt’s “Second Bill of Rights”? The one that Bernie Sanders is trying to exhume from the grave and resurrect?

Every American Has the Right to:

These read more like ambitions than rights. It’s perfectly logical for everyone to want this for themselves and for others. But by virtue of existing, they are not entitled to them. Every individual has the right to legitimately access these things. Whosoever prevents them from doing so, would then be the criminal.

For example, the UK has guaranteed universal healthcare offered through its National Health Service (NHS), but how did that go for Alfie Evans? If healthcare is a right, then why deny him access to FREE care in Italy? Is this what healthcare as a “right” looks like? Right to ACCESS would not have prohibited that boy from getting the care he was offered in Italy. Right to care provided at the discretion of the state, clearly did.

Everyone laughed when Sarah Palin addressed the issue of “death panels” in socialized care, and yet here we have a case of rationed care determined by courts and enforced by state police.

Who is the arbiter of what is “adequate”, “decent”, or “good”? That’s like “Hope and Change” or “Make America Great Again”. Is there a consensus as to what any of that really amounts to? And to what standard any of this is held?

Was what Alfie Evans got considered “adequate”, “decent”, or “good”? The UK NHS model is trotted out as the paragon for compassionate socialized medicine. Except if it deems your case doesn’t qualify.

The reality is that the NHS is insolvent. So much so that it was hiding its cuts and austerity measures from the public. And to criticize it is tantamount to spitting on the flag in the US. Are people only looking for the illusion of care? Or are they looking for actual care? People aren’t getting the care they need from the NHS. They are simply admitted into hospital. That might be the only difference between there and the US: you might not get admitted in a US hospital. But the outcome might very well be the same in the end!

Venezuela has all of FDR’s enumerated rights in its constitution, but how well are they doing right now? If you read just Title 3 and its six chapters, it’s the transcripts of FDR’s dream. But look at the ACTUAL conditions in Venezuela now. Several presidents in succession… all of whom professed these ideals… none of whom managed to carry it out with any amount of success.

I can hear the cries now: “That’s not real socialism!”

Socialism Lite is far more disastrous than Capitalism Lite, though. You give the market just an inch of rope and people see the benefits. Were it not for the black market in Venezuela, in fact, you would see far MORE starvation and desperation.

The truth is, the US has thrown good money after bad in the TRILLIONS trying to get there from here, and has failed miserably. Bernie Sanders isn’t the only one. Andrew Yang is planning a 2020 run for the US presidency on the promise of a guaranteed $1,000 per month income for all Americans.

(Frederic Bastiat had a few choice words to defend occupations supplanted by innovation in his open letter to the French Parliament on behalf of the candlestick makers.)

If anything, technology created jobs. New jobs that never existed before. If technology was a straight replacement of manpower, then the expectations would be the same, only we’d be getting things from a machine rather than a person. But that’s not what happened. When technology demonstrated that work could get done faster, demand went UP with expectations for faster turn arounds likewise going UP.

Yang’s solution is funded by a “simple value added tax” or VAT. Simple? There’s another word that doesn’t mean the same thing to everyone. California bumped up the fuel tax back in November of 2017. I wonder if any of the brain trust in Sacramento realized they were essentially funding infrastructure on the backs of the working class? A simple fuel tax hike!

Arizona has a pretty bad poverty rate, but when adjusted for cost of living, California is the title holder for the highest poverty rate in the union.

If California is supposed to be the more compassionate state, why does it build itself at the cost of the very class of people it purports to defend? Sales and fuel taxes are cost of living taxes that make life LESS affordable for people. This came on the heels of their governor blowing billions on a rail system that might never be completed in your grandchildren’s lifetimes!

Yang plans to give everyone $1,000 per month and that will be funded through a sales tax. But why not just let people keep their money then? Why charge them at the point of sale only to redistribute it back to them? Why do people pay federal income taxes only to have it redistributed back to the states? Why not just let people keep that money if it’s going back to a local cause?

It’s not that capitalism lacks compassion. It’s that there is no collective presumption on what constitutes “adequate”, “decent”, or “good”. Socialism doesn’t lack compassion. It just lacks economic sense. You can’t simply write a check and make bad things go bye-bye. Nor is there a cookie-cutter solution to large issues such as poverty, ignorance, or violence. Their causes are often economically linked, and the free market stands a better chance at solving those things than some silver-bullet socialist policy.

Licensure requirements keep the poor from enjoying upward mobility as […]