With so many unwitting and innocent people getting ensnared in the asset forfeiture dragnet it remains a hot topic; but it also has many states pitted against the federal government. 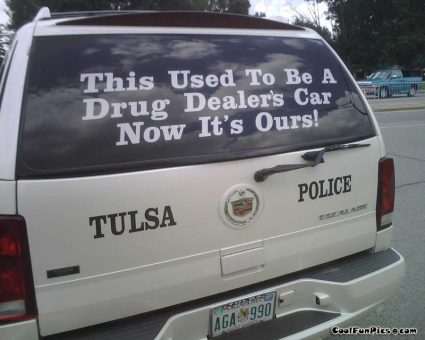 As they say even the word hopeless has hope in it. To that end, I am eagerly watching as states take on the issue of asset forfeiture. Jeff Sessions has no intention of relenting on that practice; in fact, he’s issuing directives to RAMP UP on asset forfeitures.

His presumption, as is anyone’s who defends it, is that these are the proceeds of criminal activity. But in many cases law enforcement agencies federal and local are allowed to keep what they take. If it’s wrong for a criminal to keep the proceeds of their activities, how is it right for police to keep it? It’s a multi-billion-dollar revenue generating scheme that we’ve diligently tried to cover over the years.

It’s unfortunate that it is in a state of constant flux. While the practice is arguably unconstitutional, it ultimately falls at the whim of the incumbent politicians. Eric Holder of the Obama administration admonished the profit sharing practice between local and federal agencies. Jeff Sessions wants to reinstate and expand on those features.

To be fair, the states are being far more proactive in remedying the injustice of asset forfeiture than the federal government. Thirteen states allow for forfeiture ONLY if there is a criminal conviction. Approximately one QUARTER of the states in the union saw fit to wait for a criminal conviction of a person prior to seizing their assets and presuming the guilt of said assets? Let that sink in.

The Institute for Justice has an interactive map that grades each state on its asset forfeiture laws here. A LOT of near failing grades, and nationally the US scored poorly. The good news is that states are changing the laws, so there is hope.

The past couple years have seen some remarkable reforms at the state level. From a more logical approach of trying these cases in criminal court, shifting and upping the burden of proof, and even enhancing the transparency and accountability of these programs.

About three years ago, New Mexico assigned forfeiture practices to criminal courts. It makes sense, considering a crime is being alleged either against property and/or people. Prior to that, and still in many other states, asset forfeiture remains in civil court.

Hence the name: civil asset forfeiture. Something to note about civil courts: unlike their criminal court counterparts, the defendants are not entitled to a court-appointed attorney.

Montana actually puts the burden of proof on the state to prove GUILT. This puts asset forfeiture on its ear as typically the burden is on the property owner to prove a negative.

Nebraska and New Hampshire require a criminal conviction. Maryland raise the burden of proof of criminality to “clear and convincing”. Florida and Montana raised that standard to “beyond a reasonable doubt”.

Michigan and Arizona are trying to raise the burden of proof in their states. Arizona was particularly egregious in that it imposed the cost of government attorney fees on the individual if they took the matter to court and lost. But so few people win, that it was basically to discourage challenging the state.

Connecticut, as of 2017, requires a conviction in order for the state to keep the assets. In the seven years between 2009 and 2016 Connecticut generated more than $17.8 million. Two-thirds of that came from cases where the owner wasn’t convicted. And while asset forfeiture is touted as a means to stop “large scale drug sales”, about half the confiscations in 2016 were under $570 in value.

Alabama is bringing their reforms to the floor soon. They would be abolishing civil forfeiture and only have criminal forfeiture (i.e. require a criminal conviction to keep seized property vs their burden of “reasonable satisfaction” to date).

In 2015 alone, Alabama collected almost $2.2 million. There’s hardly any consistency in whether there is transparency in how such revenue is spent. It’s not tax dollars, so it’s not scrutinized nearly as much, and when documentation is requested, it’s often met with a balk.

But all that is changing, at least in Alabama:

“The bill would also strengthen due process for property owners by raising the standard of proof to clear and convincing evidence and by shifting the burden of proof onto the state, which would restore the presumption of innocence for forfeiture cases. And to promote transparency and accountability, the bill would institute comprehensive reporting requirements for the state’s seizure activity and forfeiture spending.”

Texas, Idaho, Tennessee, and even Pennsylvania are taking asset forfeiture reform under consideration. But with a supremacy clause that can easily trample these efforts by each of the states, even further measures were needed:

“The federal government’s forfeitures are so rampant, and so lacking in adequate constitutional protections, that many of the states that have passed reforms were forced to include anti-circumvention measures to prevent federal laws from undermining the states’ work to protect their citizens’ property.”

No matter what states do to their own policies, if they don’t incorporate a prohibition of participation in the federal “Equitable Sharing Program”, the legislation is toothless. This program tripled its payout to state and local governments – from $199 million to $643 million — in a matter of thirteen years between 2000 and 2013.

Asset forfeiture is an arcane relic of human history. You can take this all the way back to the bible. An example would be if a club was used to murder someone, the club too was culpable. Fast forward to medieval England, and that tool of murder would be confiscated by the crown with the value of that item being donated to charity. Not so bad, right?

Well the charity part dropped off since then, while its application expanded to Maritime Law to combat piracy. Still somewhat understandable in that it was common that ships would be lent out and the rightful owner of the ship knew nothing of the purposes for which their ship was being used. So the ship would be seized and the pirates would be charged.

It was retained for those purposes by the United States as a sort of pragmatic exception to due process. That also set a precedent, which then allowed the government to use asset forfeiture to seize Southern land during the Civil War as well as enforce taxation.

Now here we are fighting the good fight against drugs, and it has become this civil liberties atrocity run amok. These reforms are long overdue; and they still have a long way to go in reeling it in.