The US is coming down off the tax cut rush, and the consequences of a trade war and tariffs are becoming more visible. 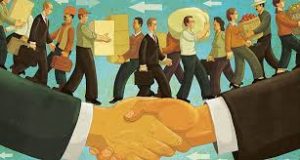 There is nothing about the laws of cause and effect that even imply that the effects must be immediate; much less a time limit which suggests that if negative effects are not seen by a certain time, they do not exist at all.

If we look to the stock markets first American tech companies took a pretty big hit.

“The US markets have now entered correction territory, down over 10 percent from September highs.

“The tech-heavy Nasdaq index plunged over 3 percent in early trading. Dow Jones was lower by 2 percent at over 500 points, while the S&P 500 sank more than 2.5 percent.

“Shares in Amazon plunged 8 percent, while Alphabet fell 2.7 percent. Facebook, Netflix, and Apple were all losing more than 1.5 percent.”

Another article goes on to describe the sell-off on October 24th as “one of the worst trading sessions for US stocks in years, erasing all gains seen in 2018.” Furthermore, “Wednesday was the worst day for the Nasdaq since August 18, 2011”.

Some would blame the trade war for this. I can see how Amazon would be affected… but others don’t know if that’s really it.

What’s behind that remarkable number? 59% of the bottom line GDP is comprised of inventories build up, or consumer activity. Between fixed investment, exports, and imports, the US economy contracted by over 1.83%.

Consumer activity alone is not enough to sustain the economic momentum attributed to Trump. Tax cuts can only take the US economy so far. Interest rates are climbing which is affecting the housing market among other large ticket item purchases. Granted, that’s a long overdue correction that’s needed, and it certainly adds value to the otherwise debased USD, but that will have an effect on the economy nonetheless.

There is a general delay in the economic hits to Main St. Just like with QE, Main St. sees the effects much later than those at the top. Those at the top, reap the benefits actually. Fast forward and Main St. wakes up one day with their dollar not going as far as it used to.

The same is happening here. Tariffs were imposed, but only after most of the 2018 shipments for retailers reached their destinations. Main St. isn’t going to see it in Q4 on the retail end, but they have been feeling it on the production end.  Which means, 2019 is going to be very telling.

How is everyone else handling tariffs?

China is in a bind. Does it sell yuan in order to buy USD denominated bonds? That would lead to inflation at home. Alternatively, does it call in its debt – even part of its $1.2 trillion in Treasuries – and push up interest rates in the US?

They are about to put the petro-yuan to the test. China loves it some natural resources from crude to metals. They’ve been buying in USD until the tariffs struck, and they are running low on reserves.

They are out pacing the US in crude consumption, they account for 60% of the worlds demand in aluminum, and global pricing for iron ore is fixed in China. As a matter of fact, London Metal Exchange, is looking to introduce yuan-denominated metal products.

The yuan has a long way to go in becoming a global reserve currency. As of 2016, it still hadn’t hit 2% of global transactions.

“To truly dethrone the dollar, the yuan would have to meet three criteria: It would have to become a medium of exchange, a store of value, and a unit of account. Certainly, oil and iron ore futures denominated in yuan would strengthen the currency’s role as a medium of exchange and unit of account. But even if these financial instruments became widely used among commodities investors across the world, they would be tied to a currency that is not very popular—that is, it is not seen as a reliable store of value. And only the removal of capital controls and full convertibility will fix that problem.”

Regardless of this shortfall, China stands a good chance of weathering the storm of this trade war based on its ability to trade for commodities and resources.

The EU is in a sort of trade armistice with the US. There’s still tariffs on steel and aluminum, but there is a truce with automotive. This delicate situation has companies like BMW, Volkswagen, and Siemens nervous. Despite their current stable facades, they are reporting quarterly losses in profit. The tariffs on steel affect the cost of raw materials for these corporations.

The overall supply chain for most metal dependent industries globally are feeling the pressure.

But here’s where economics shows its subjective side, and ultimately can be regarded as a true social science. Predictability, stability, and confidence have as much to do with the equation as the money changing hands. That trifecta determines how much money changes hands and when… or if at all.

While the EU hasn’t collapsed under the pressure of tariffs and trade disputes, there is concern. Uncertainty leads to hesitation. Hesitation could lead to reluctance. Reluctance could manifest itself in the form of little to no investment, or indefinitely delayed investment. That can ultimately mean a slowed economy all around, not just for the EU or the US.

The NYT writes about this:

“American businesses are worried, too. A closely watched barometer of sentiment among United States managers dipped to a 12-month low Thursday. Concern about tariffs is ‘an overwhelming concern,’ the Institute for Supply Management, which conducted the survey, said Thursday.

“Even if Europe manages to stay relatively clear of any dispute over auto imports, its economy would be disrupted by escalating tensions between the United States and China. Carmakers and other manufacturers depend on complicated supply networks in which components often move across borders and continents multiple times. Both the United States and China are integral players in those networks.

Like I said: Main Street isn’t seeing it all unfold yet. Those looking at top-line numbers aren’t looking at what those numbers indicate. It’s dishonest to say all is well simply because Main Street is still on some sugar high buying frenzy.

More evidence of a global demand for decentralization: Russia opens […]