Technology has been the key to freedom and economic equality for many around the world.

The market turns to technology to get out from under the foothold of government and crony corporations. 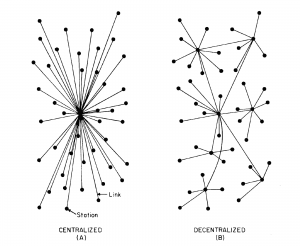 Without question, modern civilization has introduced and commoditized many creature comforts. Computers and cellular phones are commonplace. Plumbing in developed nations is a foregone conclusion. Some would even go so far as to say that a poor person in the US lives better than a king several hundred years ago.

Humanity is better off. Recently extreme global poverty dropped below 10% for the first time in recorded history. That is a remarkable testament to what technology and markets can do.

About five years back news was breaking about how the NSA was spying on Americans through their email and social media, and the news was that they were doing so for years prior to the media breaking the story.

Edward Snowden sits in exile because he dared to tell Americans what its own government was doing to them. And the question posed by Matt Apuzzo back in June of 2013 remains unanswered:

“If the programs needed secrecy to succeed, will NSA shut them down now? If not, did they ever need be secret? Or did I just blow your mind?” — Matt Apuzzo (@mattapuzzo) of the AP, June 7, 2013

This is clearly true for cryptocurrencies. Crypto has been around for over a decade, and in the past two years, the US government has tried its level best to monitor, track and regulate it.

Blockchain technology is being used for much more than just cryptocurrency since it really comes down to record keeping. It can store and transfer data of any sort from a unit of currency to contracts, but because it is encrypted and decentralized, it is a very secure means by which to transact.

Technology in the private sector has usually been several steps ahead of the government. The unfortunate part is when the government does finally catch up, there is a deluge of regulations and intrusions involved.

A few days ago, Facebook conducted a very large purge of pages and accounts. Approximately 800 accounts were affected, and the social media giant states “political spam” as the reason for it.

Some of the accounts were left leaning others right leaning, and from what I’ve seen a good number were also libertarian. Two of the big ones to get taken down were the Free Thought Project and Anti-Media, but several popular police accountability pages were also taken down such as Police the Police and Cop Block.

The thing is: Facebook is a private company, and its service is virtual private property. The arrangement is similar to that of a large apartment complex: yes, you have your own unit, but you still are subject to the whims of the primary owner.

I can’t say this was entirely or even partially government initiated, but it is known that Facebook collaborates and works with governments around the world. The US government has even had them submit data and put gag orders on it so Facebook couldn’t tell its users this search was happening. It was even called out point-blank regarding streamlining information for the government at one point as part of the NSA PRISM program.

Tim Berners-Lee is the inventor of the internet (don’t tell Al Gore), and he saw this coming. Long before the social media purge, Berners-Lee went into stealth mode to basically “reinvent” the internet. What he is really trying to do is FREE the internet: “In the centralized web, data is kept in silos – controlled by the companies that build them, like Facebook and Google. In the decentralized web, there are no silos.”

Berners-Lee has taken some time off from MIT to dedicate all his time and effort into realizing a decentralized web platform he calls “Solid” through is start-up company Inrupt.

“Its mission is to turbocharge a broader movement afoot, among developers around the world to decentralize the web and take back power from the forces that have profited from centralizing it. In other words, it’s game on for Facebook, Google, Amazon.”

What does all this mean for end users like you and me? The short answer is all the data you create or add on this platform belongs to you and remains under your control.

Decentralization stands to put a lot of control back into the hands of end-users. That is easily seen in the contrast between cryptocurrenies that are based in blockchain and bank accounts.   When people hand over money to their banks, they relinquish ownership. It becomes the unsecured debt of the bank. In the event of a banking crisis, their debt to you is wiped clean, and it goes toward paying off derivatives.

Moreover, should there ever be any sort of crisis, as we’ve seen in places like Cyprus, your account holdings could easily be confiscated or frozen. The banks might technical be private, but the government pulls the strings.

The same is true for all data. Yes, Facebook and Google are private, until the government wants something. Then your data becomes public.

What is reassuring is that solutions are constantly in the works. VPN privacy, dark mail options, and now the prospect of a less centralized and siloed internet.