Americans will feel the inevitable ripple effect of Trump’s tariffs, as prices go up, and industries shrink under the strain of these new costs. 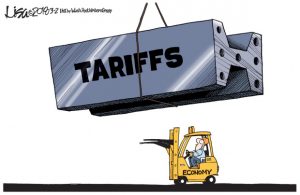 We are going from prediction to observation of the effects Trump’s tariffs are having on the US economy.

Over the past two years, we’ve absolutely seen a remarkable growth in jobs and reduction in unemployment. Even by U6 standards, unemployment is approximately 7.4 which is lower than the U3 numbers in back in 2010.

Wages are slow to rise, and that could be attributed to businesses investing in themselves: paying off debts, doing some long overdue maintenance or purchases, and hiring on more staff. Maybe once businesses get caught up, we will see rises in wages?

Hear an average conservative tell it, things are great! But there are a few indicators that suggest that we might be in a September 1929 sort of haze. I’m not saying a crash is eminent. I’m saying these positive indicators might not be long for this world.

Here are some things that support this:

Say what you will about the largest retailer in the United States, but they provide a wide array of affordable goods to the American people and around the world. The place most could generally count on for low priced goods is suggesting they would have to drive up prices on their products to offset the costs of tariffs.

“Walmart can afford to absorb the costs! They make so much money!”

Walmart profits 1 day out of every month. The other days’ revenues are spent to cover the cost of operation.

“Turns out, Walmart only keeps three cents for each dollar they earn in revenue. Apple on the other hand pockets almost a quarter. To illustrate, during a 31-day month, every cent that Walmart receives for the first 30 days is paid out to cover costs. Only the last day of the month, more specifically the last 23 hours, Walmart earns 100% of its profit for that period. On the other end of the spectrum, Apple would earn only profit after just 3 weeks of sales to cover costs, over the same period.”

Walmart has a very lean operation, so to say they can afford 10-25% tariffs is absurd. The fact is, Walmart facilitates the export of American goods to China, and those exports are experiencing retaliatory tariffs.

Moreover, they are a huge promoter of buying and making in the US, where it makes sense. In a letter to US Trade Representative Robert Lighthizer earlier this month, Walmart reminds them:

“Two-thirds of what Walmart spends on products sold in our US stores is sourced, assembled or grown in the United States. In January 2013, Walmart furthered its commitment to American economic renewal by announcing a 10-year commitment to purchase an additional $250 billion in products that support American jobs… Unfortunately, the proposed tariffs have the potential to undermine these reshoring initiatives. Many manufacturers rely on component parts from China to assemble and finish production in the United States.”

So something as basic as a bicycle would be affected. A bicycle requires over 40 individual parts, all of which are imported. A completed bike is tariffed at 11% already. An additional 25% would be a disaster.

Almost two years ago, chairman of Alibaba, Jack Ma promised to onboard a million small US businesses onto his platform by 2022, giving them direct access to the Chinese marketplace.

About a week ago, Ma withdrew that promise stating:

“This commitment is based on friendly China-US cooperation and the rational and objective premise of bilateral trade. The current situation has already destroyed the original premise. There is no way to deliver the promise.”

Much like Walmart, there are many industries whose supply chain is precariously structured but runs internationally. All boats rise with the tide, so while the parts might be made in Mexico, they are assembled and sold in the US. Jobs all around, right?

Well, Trump’s threatening tone toward NAFTA could put many parts-suppliers out of business entirely. Similar to the conundrum of Walmart, relocating your parts production isn’t as simple as snapping your fingers. In fact, it’s often a losing proposition, unless you increase the price of product and/or service to offset that loss.

This comes at a time when American automotive is already struggling:

“But consumers are already struggling to deal with their car payments, driven up as the cost of the typical vehicle sold in the U.S. approaches $35,000. Vehicle loans are being stretched out to record levels, with 60, 72 and even 84-month financing becoming more the norm than the exception.”

That’s just for the purchase. What about the maintenance? Small aftermarket parts like windshield wiper blades and filters that need to be switched our regularly are all affected. So now general maintenance costs have hiked as well.

Well, they have the scale to show real impact. I mean, I could tell you about the small local newspapers paying 22% tariffs to get newsprint from Canada. I can tell you about small towns like Clarksville, TN where polysilicon production was supposed to start in a $1.2 billion factory; but due to retaliatory tariffs on polysilicon, the factory never opened.

Tax cuts and deregulation have companies on a hiring spree, but the cost of doing business is going to outpace that growth, and pose a huge challenge to wage increases since the cost of staying in business will go up too.

Tariffs are doing more harm than good. Even advocates of fairer trade agreements are calling for another way other than a trade war. These hits, along with the hits in other industries we’ve mentioned like agriculture, will be felt sooner rather than later.

Is the controversial EU Copyright Directive a Trojan Horse or […]