This Could Be the #1 Reason to Move Money Offshore

This Could Be the #1 Reason to Move Money Offshore

The US Federal Reserve has embarked on some economic insanity, so rather than keep your money exclusively in the US get some of it offshore. 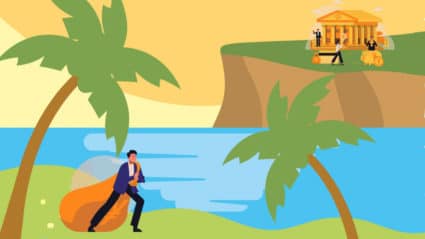 U.S. monetary policy in the U.S. has been chaotic since 2009. That isn’t to say that savvy investors couldn’t profit from it…

But eventually the bill for the Fed-fueled investing “party” comes due. And that time appears to be right now.

With inflation out of control, the Fed has had to slam the door on cheap interest rates and money printing. In fact, they’ve had to do a complete about-face.

Powell’s Fed has raised rates faster than anybody expected to cool off the overheated market, which – despite their “best” efforts – appears to be headed into a full-blown recession.

But the dismal economic situation in the U.S. isn’t the only reason it might be a good idea to start examining how you can keep your money safe…

Warning: The Inmates Are Running the Asylum

I mean, politicians have always had a few screws loose, but the Biden administration seems to be even crazier and more inept than normal.

Case in point: The ruling elite in Washington seem to think the current economic suffering caused by inflation is actually a good thing. Jeffrey Tucker at The Daily Reckoning explains:

The people who hold power today seem completely clueless about why [the value of the dollar is sinking rapidly]. Actually, that’s a charitable interpretation. They might just think it is great.

High gas prices are pushing a shift to electric cars, presumably to manage global climate […]. Or maybe there is an impulse here just to redistribute wealth and disorient people to create new levels of dependency.

Whatever the reason, I’m seeing absolutely no signs that anyone at the top has any intention to put a stop to this.

It isn’t just U.S. politicians who are acting like they might be better off in straightjackets, either. The people commonly known as the DAVOS “elite” are just as bad.

These people have promoted weird ideas like a cashless society, negative interest rates, and transhumanism. Not exactly the normal person’s cup of tea.

Although they’re not part of any national governing body, Doug Casey thinks the people running DAVOS can do just as much damage:

“These people are the self-righteous epitome of the Establishment. They’re absolutely opposed to free minds and free markets. They are, however, in a position to influence the policies of the governments that control much of the world’s economy. And they do.”

The fact they have any influence over the lives of normal people like you and me is disturbing, to say the least.

I don’t want my money tied up exclusively in dollars or in U.S. banks, and I strongly suggest you shouldn’t either.

But how exactly do you get your money out of the U.S. banking system? I’m glad you asked…

I’ve written a detailed report that contains information about keeping your money safe that you won’t find on blogs, mainstream media, or from listening to podcasts.

The entire report is easy to read and will give you the information that you need to keep your money in a safe place, and away from Government insanity and overreach.

P.S. If insane people are running things right now, that’s a great reason to have some of your assets tucked away in a safe place. And I wrote a report that can help you do just that…

Global Elites are Out of Touch with Global Economy

Global elites demonstrate they are still out of touch with […]