U.S. Government Overspends Again – But Here’s What’s Alarming About It…

U.S. Government Overspends Again – But Here’s What’s Alarming About It…

U.S. government is overspending at an alarming rate, despite the boost it receives from asset forfeiture, and there’s no end in sight. 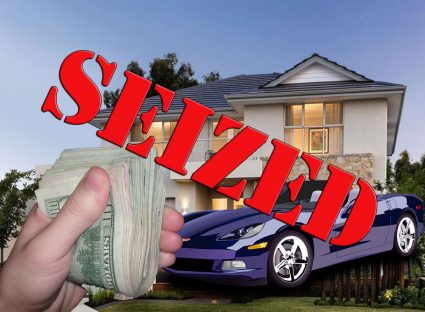 The U.S. Government’s fiscal year ended on September 30th, and some of the results are alarming…

$16 billion in revenue came from DOJ programs, and part of that was stolen from U.S. citizens through “legal” programs like Civil Asset Forfeiture.

And that’s not even the most alarming part…

The U.S. overspent their revenue by nearly $1 trillion (with a “t”) … again. They added almost $700 billion of that to the National Debt.[1]

The U.S. ran severe budget deficits during the Great Depression and World War II. During the 1940s, spending on the war effort created the largest deficits as a percentage of total gross domestic product, or GDP, in American history.

Since 1970, the federal government has run deficits during every fiscal year for all but four years, 1998 to 2001.

Even more alarming is the habit of overspending, and adding to the National Debt year after year with no signs of stopping. The debt currently stands at almost $21 trillion.[3]

Both the annual overspending and piling on to the National Debt has become “business as usual.” If it weren’t for debt ceilings, it might be much worse.

Factor in pension shortfalls, and “business as usual” has the U.S. net worth hovering in the negative around $65 trillion.

All of this unsustainable “business as usual” can sink your savings like a cement block thrown over a bridge, if it continues.

In fact, the U.S. Congress has already put another $4 trillion spending bill forward. This means another $1 trillion in losses unless more tax revenue comes in.

This obvious insolvency already proves that it doesn’t make sense to keep 100% of your assets within U.S. borders.

You can also expect Civil Asset Forfeiture incidents to increase as things get worse.

Recall from one of my previous emails Angela and Joyce, the couple who lost $17,900 to the police with no charges ever filed against them.[4]

That type of “legal” robbery is only going to increase as the U.S. gets more and more desperate to keep the economy solvent. And if for some reason you doubt this, just review what happened in the Greek debt crisis.[5]

So you need to start doing everything you can right now to keep your money safe.

That includes opening an offshore bank account in as little as 10 minutes, and moving some of your money into it.

Offshore bank accounts give you options. By placing some of your wealth outside of U.S. borders, you can protect your savings from sinking into the U.S. economic abyss.

You’re also putting it out of reach of corrupt governments who have a long track record of stealing money from its citizens.

Opening an offshore bank account is actually quite simple, 100% legal, and one of the smartest financial moves you can make[6]. My special Offshore Banking Report shows you how.

When you get my Offshore Banking Report, you’ll discover 23 different offshore banks, FinTech platforms, and P2P lending platforms where you can quickly open accounts to protect your wealth from corrupt governments and politicians. This report is only $19 right now…

Get your digital copy of the report right here

P.S. The U.S. Government is hemorrhaging money year after year. Just imagine how bad it will get in the next financial crisis. Get my special report today and learn how to protect yourself.

The myriad changes that unfolded in 2017 will make for […]