As the Venezuelan economy takes another hit when the 100 bolivar note is banned. 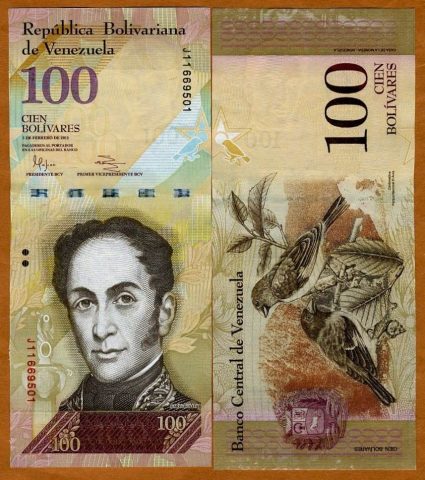 Venezuela officially went off the economic deep end. The only way to describe it is that they’ve banned economics altogether. The Venezuelan bolivar is depreciating at free-fall speeds of 20% per month on average, and their government decides to ban the 100 bolivar note. If you thought that was bad for the rupee, where 100 note was worth around $7, imagine the disaster in Venezuela where there 100 note is worth about $0.03 American.

“Inflation in Venezuela is expected to rise to nearly 500% this year and to a whopping 1,660% in 2017, according to the International Monetary Fund.” (Source: CNN)

Much like India, Venezuelans do not have a high banking rate amongst its citizens. For a socialist country that claims to build policies to help the poor, this currency ban does the exact opposite, since the poor are less likely to bank or have access to one. People have relied heavily on cash transactions, so much so that rather than counting the cash during transactions, they weigh it. Once the money becomes more valuable as kindling than an actual currency, then they will have their own Latin American Weimar Republic.

And for those thinking using a card is any better, it’s not. Luis Oliveros, an economics professor at the Caracas Metropolitan University, weighed in with, “People have used credit cards so much that electronic payment systems have recently collapsed. This is a very serious problem.”

Banning their highest denomination puts the people in the very chaotic position of resorting to the 50 bolivar note, which is only worth $0.015 American. The president issued the ban and then gave the people three days to switch out their 100 bolivar bills for coins of equal face value or six other notes ranging from 500 to 20,000 bolivars. Here’s the problem: they have yet to show up.

In the meantime, Venezuelans are migrating en masse to Colombia to have their basic needs met, and their president saw fit to shut down the border for 72 hours while the 100 bolivar note was being removed from circulation:

“President Nicolas Maduro announced Monday night that he’s closing the country’s border with Colombia for 72 hours as Venezuelans rush to exchange bills before they become invalid later this week.”

As if that wasn’t bad enough…

“The governor of the state of Táchira, Venezuela, José Gregorio Vielma Mora, has informed the public of a ban on the purchase and sale of real estate or the registration of new companies until notes of 100 bolivares fuertes have been removed from circulation.” (Source: Panampost)

To bring real estate and company registration to a halt until 100 bolivar notes have been fully removed from circulation is outrageous! Shutting down the border to deny people access to their basic needs in Colombia is downright cruel.

All this in response to cleaning out the 100 bolivar bill? Well, what precipitated the removal of the bill in the first place is the belief in a very elaborate, albeit totally unbelievable conspiracy theory.

2016 must be the year of left wing conspiracy theories that revolve around Eastern European shenanigans because not only are American Democrats blaming Russian hackers for manipulating and rigging our voting system, but now Venezuelans are also blaming Eastern European countries for cooperating with the US Treasury in warehousing stolen 100 Bolivar notes. The story and claims are so outlandish, you’d think I was making it up but for the fact that there is a video of Interior Minister Nestor Reverol explaining the entire thing.

But there are other theories as to why they are banning the 100 bolivar bill and why they are suffering such insane levels of inflation. One such theory has to do with illegal exchange bureaus at the Colombian border manipulating the value of their bolivar. Because it makes perfect business sense for anyone to stockpile the fastest depreciating currency in the world? We are talking about a government that at one point didn’t even believe in inflation!

All the conspiracy theories in the world serve as little consolation the people of Venezuela. How does a country so rich in one of the most high demand commodities in the world – oil – fall flat? For a while now, China has been Venezuela’s main benefactors (sound familiar?). In exchange for a secure source of oil, China offered cash and infrastructure.

That’s come to a stop. China not only cut off Venezuela’s line of credit, it also stopped its high speed rail project: just up and walked away from it.

Venezuela’s oil production plummeted to a 13-year low. Their government has been remiss in paying its bills to some of its service providers, so operations have been either lowered or halted altogether.

President Maduro promised to increase the minimum wage by 40%. That along with printing larger bills only plays along with the runaway inflation. It does nothing to mitigate it.

Venezuela has several forces working against it:

It has a president who is changing their democracy into a dictatorship. When a recall referendum was demanded by the country’s National Assembly, it was suspended by the electoral commission in violation of their country’s constitution.

Its state owned oil company is corrupt and so far is said to be “missing” $11 billion.

Excuses don’t pay the bills. People are suffering. They are getting frustrated and violence as well as black market activity is escalating. Government policies aren’t going to help. Government removing itself from the equation is the ONLY chance these people have of survival.

President Maduro’s term expires in 2019, regardless of the referendum. Will Venezuela last that long? Will he even step down when the time comes? I don’t know. But this country is experiencing the very extremes of what leftist economic policies and interventionism are capable of.

India joins in global cashless policies, but it took a […]