Weimar Hyperinflation in the U.S.?

Weimar Hyperinflation in the U.S.?

The inflationary policies of the past and current administration in the US, is sending that economy straight toward hyperinflation.

“At the least, transitory hyperinflation ahead,” warns Savita Subramanian. She is Bank of America’s Head of US Equity & Quantitative Strategy.

Back in February of this year, Michael Burry of “The Big Short” fame warned of “Weimar-style” hyperinflation in a now-deleted Tweetstorm.

He also said: “People say I didn’t warn last time. I did, but no one listened. So I warn this time. And still, no one listens. But I will have proof I warned.”

In Venezuela it only took about 5 years for the Bolivar to lose 90% of its value while inflation soared to 1.37 million percent.

Things probably won’t get that extreme in the U.S., but the lessons from 1923 Weimar revealed they may not have to. Just before that economic event, cash was being “printed” like it was going out of style — similar to the Fed’s new MMT policy.

Which brings us to today…

Will the “Unthinkable” Happen in 6 Months?

“I am looking down the road, and in early 2022, I am looking for something close to a hyperinflationary circumstance and effectively a collapsed economy.”

He bases his bleak outlook on the pre-1990 methodology that was used in the United States before the Fed stopped factoring in a “constant standard of living.”

You can see a comparison of the “official” inflation to the pre-1990 method on the chart below, which shows that inflation is actually closer to 8% than 4%:

And since a picture is worth a thousand words, below you can see a Market Insider comparison of prices in 2020 versus 2021 for items like gas, wheat, and corn (among others): 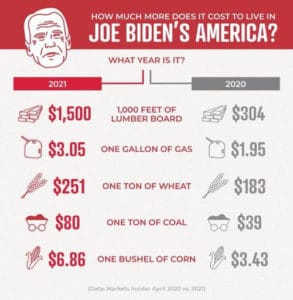 It looks to me like the unthinkable may already be underway. Even the official report revealed inflation had almost doubled from March to April of this year, jumping from 2.6% to 4.2% (driven by a 49.6% price increase at the gas pump).

This trend isn’t likely to slow down any time soon. Inflation isn’t a “light switch” that can be turned off. It’s more like a train that has already picked up speed: it will take time before it slows down.

The late libertarian economist Robert Wenzel (RIP) said he was being conservative with his warning that “inflation over 10% cannot be ruled out.”

Thankfully, inflation that high isn’t what would be considered hyperinflation, and more closely resembles 1980s inflation in the U.S. But what if the outcome isn’t “conservative”?

Then it could get expensive to live in the U.S. — and fast.

The “American Dream” Could End Up a Nightmare

Aside from food and gas prices, there are other types of price inflation that could spiral out of control. Starting in May of last year, housing prices (and rent) were already starting to become unaffordable for the majority of Americans.

The “American Dream” of owning a decent middle-class home appears to be dissolving.

The lumber price increase revealed in the graphic above is at least partly at fault for that. But other materials like copper, steel, and drywall aren’t getting any cheaper either.

And if the imminent inflationary period the U.S. is going through right now isn’t “transitory” as the BofA executive warned — and is actually a longer-term crisis — then it will spell trouble for all consumer goods, not just housing.

Federal Reserve Chairman Jerome Powell has already hinted that long-term inflation is what we will see, telling 60-minutes: “But then we’d also like to see it on track to move moderately above 2% for some time.”

It’s probably a good idea to be prepared in case Powell’s next update talks about double-digit inflation.

Before the U.S. Inflation Skyrockets!

During that time, I’ve also learned dozens of valuable lessons about how to maintain my independence free from inflationary economies, “ethically challenged” Government officials, and public runs on banks.

P.S. It won’t take long for already-rising inflation to spiral out of control, so you need to move fast. Here’s your next step…

Become a GWP Insiders member today to discover how to keep your income safe, along with many more secrets to secure your future no matter how high inflation gets…