Your Assets Seized (And Nothing You Can Do About It)

Your Assets Seized (And Nothing You Can Do About It)

Police can seize assets, under a presumption of guilt; and they are incentivized to do so under a federal equitable sharing program. 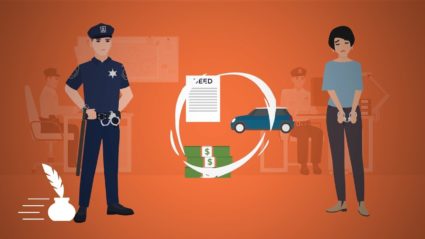 Imagine a police officer just showed up at your door one morning and seized your car even though you hadn’t committed any crime.

Imagine he did not even accuse you of a crime, but merely cited criminal suspicion — he simply claimed he had reason to believe you were breaking the law.

Imagine your car being towed away while the police officer sanctioned the seizure. And imagine never being charged with any official crime — yet still losing your car.

Now stop imagining. If you live in the “Land of the Free” (the United States), you already live in that kind of society.

But Here’s the Real Kicker…

In 2014, U.S. cops seized more total assets than burglars. It may be even more lopsided today than it was seven years ago.

But even if this disturbing trend of civil asset forfeiture hasn’t gotten worse since then, there are two important things to think about:

A quick look at the United States DOJ website revealed that the program is still in operation today, complete with an instruction manual for state and local authorities.

According to the American Institute of Economic Research, there isn’t much you can do to protect yourself from the confiscation of your assets at the hands of police:

Protections against seizure and forfeiture are so fragile that they encourage law enforcement officers to treat every roadside encounter like an interaction with a career criminal. The law encourages the investigation, detention, and search of motorists for crimes that have nothing to do with automobile travel. The possession of cash, for instance, serves as sufficient evidence that the cash is related to crime and therefore justifies its confiscation.

The article also revealed that the 4th Amendment against illegal search and seizure appears to have been tossed out the window: “If the victim of a cash seizure wants his or her money back, to retake possession, that person must demonstrate in court that it is unrelated to criminal conduct.”

In other words, the onus is placed on the citizen victim to prove his own innocence… the exact opposite of the legal principle of being “innocent until proven guilty.”

The only hopeful sign is the handful of states that have ditched civil asset forfeiture entirely: Maine, New Mexico, North Carolina, and Nebraska. Unfortunately, that leaves 46 remaining states where the police can “pick your pockets” for no good reason.

Freedom in the U.S. is in short supply these days. And more of it disappears every year. Which is why…

You NEED a Way to “Opt Out” of the System

During that time, I’ve also learned dozens of valuable lessons about how to maintain my independence free from the IRS, “ethically challenged” law enforcement personnel, and stupid tax ideas buried in thousands of pages of legislation.

P.S. As you can see, even a simple traffic stop could turn into a nightmare, so you need to move fast. Here’s how you can keep your assets safe from the police state…

Become a GWP Insiders member today to discover how to keep your income safe, along with many more secrets to secure your future…

Whether by choice or by necessity, people are shifting away […]