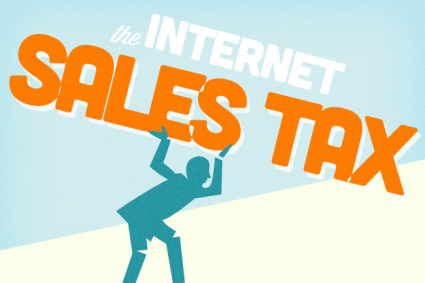 The Market Fairness Act we wrote about back in 2013 has made it to the Supreme Court, and this could decide the future for many small businesses online. Aside from the minimum wage battle happening in many “blue” states and cities, there is also an on-going tax battle.

Small businesses make up a large percentage of job creators in the United States:

With small businesses spending on average about $83,000 to be regulation compliant in just their first year of operation, what do you supposed the additional cost would be to comply with 12,000 taxing jurisdictions? How many jobs will that cost? How many businesses will go under from that?

From a constitutional standpoint, it makes no sense for the SCOTUS to be ruling on matters of taxation. Taxes are a power delegated to Congress. Congress has yet to act one way or another, but that might very well be due in part to the SCOTUS agreeing to hear these cases in the first place!

A ruling back in 1992 (Quill Corp. v North Dakota), ruled that the online retailer had to have a physical presence in a state in order to owe that state’s sales taxes. South Dakota v Wayfair would overturn that ruling.

With the Quill Corp. case relying on the definition of “physical presence”, I have to ask what that really entails. The argument from both North and South Dakota have to do with the “fairness” of sales tax: if the brick and mortar stores have to pay it, so should online retailers.

Let’s examine brick and mortar situations for the sake of this discussion. Specifically, let’s look at New Hampshire and Massachusetts, because the former has no state sales tax and the latter certainly does at 6.25%.

When someone from Boston comes up to the Tilton Outlet Stores, they pay no sales tax on their purchases. No one asks where the customer is from, suggesting that the Old Navy in New Hampshire should send a check to Massachusetts. But for some reason, it’s expected of online retailers? That hardly seems fair.

There is nothing “fair” about taxes. There never will be. That’s like asking for criminals to be fair in their murders, burglaries, and assaults. Is even being robbed a little bit really fair? Does that fairness have anything to do with whether others have been robbed as well? Of course not. You don’t see victims of assault pinning their case against other victims to see if their assault was justified! Why would we do that with taxes then?

Obviously, the states are losing revenue and they are up in arms. I’m sure the brick and mortar shops in sales tax states are likewise irritated; for the same reasons they are put out by street vendors and those operating under local Cottage Laws: the overhead isn’t as high so they can be more aggressive on the price-point.

This is the “unfair advantage” China and other developing countries have over the US: lower regulatory costs allow Chinese businesses to sell at a higher margin but a lower overall price-point. Trump’s answer was to levy tariffs; but if the “unfair advantage” is the competition’s lack of regulatory or tax costs, then wouldn’t the natural solution be to eliminate that burden from your own businesses to even the playing field?

This is why states don’t want you smuggling certain goods in from other states. If the cigarette taxes are lower in a neighboring state, they don’t want people coming in and selling them tax free.

If sales taxes are lower in Arizona, California doesn’t want you buying your cars there and registering back in California. Sure, they trot out local businesses as their sympathy prop, but in truth they don’t care if local businesses thrive or die. They care about their cut in taxes.

If they truly cared about business success, they’d eliminate sales taxes altogether. Instead, states are calling for MORE regulatory burdens on small businesses.

Again, from a constitutional standpoint, wouldn’t this be a direct violation of the commerce clause that was meant to keep interstate commerce regular? All this would do is rearrange the unfairness of taxation. Whereas the problem was the unfair advantage of online vs brick and mortar stores, now the unfairness will be between small online businesses and large competitors.

For obvious reasons, eBay remains staunchly opposed to this measure:

“eBay opposes any attempt to impose Internet sales tax collection burdens on small Internet-enabled businesses that struggle enough as it is to compete with big box retailers. Sales tax legislation needs to be fair to businesses of all sizes.”

In fact, eBay, together with 51 other small business sellers, filed an amicus brief in April with the SCOTUS for consideration in the South Dakota v Wayfair case. Among the legal considerations they present, they also provide statistics and first-hand stories of some of the eBay vendors.

If the business “makes” less than $1 million per year, they wouldn’t have to collect the taxes. But “makes” is a vague term. $1 million in sales? Or $1 million in profits? If it’s $1 million in sales, that’s not a lot in profit margin. If you’re operating at a 25% profit margin, that’s $250,000 per year. Rather than reinvest the money into expansion, or hiring more people, they should redirect that money toward sales tax compliance? What a useless black hole!

Sadly, 25% in profit margins is a total unicorn! According to Forbes, as of January 2016, the average profit margin for billing less than $5 million per year was… 7.5%. Let’s say Trump is an economic magician and round that up to 10%. That means a business billing $1 million is making $100,000 in profit. That’s middle class at best depending on where they live. If that business is owned by a couple who shares that margin, that’s even worse!

Meanwhile, unsurprisingly, Amazon favors the legislation and rulings that impose state reporting of taxes. Not only are they already poised to absorb those costs and support the subsequent work flow, they stand to make money from it. As CBS News contributor, Mellody Hobson, reports:

Amazon put up quite a stink over Seattle’s effort to tax them for their employee headcount. They threatened to leave or at the very least not expand their operations. But when it comes to local sales tax compliance, they’re fine? If that isn’t the epitome of cronyism and hypocrisy I don’t know what is.

40% of the US economy is about to become insolvent […]