Corporate welfare is still welfare.  There is no excuse for it as it only distorts our market. 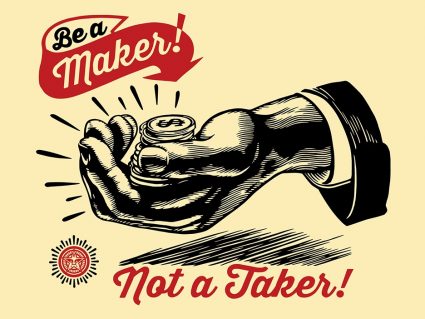 Just because I help people with their corporate structuring, doesn’t mean I’m in any way a proponent of corporate welfare. If you’re drawing from the largess, you’re costing taxpayers. I make no distinction between the family of five on food stamps, government employees, or large industrial corporations. If you receive a dime in taxpayer dollars, you’re on welfare.

I do make a distinction between subsidies and tax breaks, however. Keeping your own money is not problematic. There is also regulatory subsidies, where certain cronies are given preferential considerations. That might not draw from the largess, but it does distort the market and the playing field. The corporations that have their hands out for favors are still rent-seekers in my book. (Arguably, if power wasn’t concentrated with a small group of self-serving politicians and bureaucrats, such favors wouldn’t be possible; but that isn’t what we’re working with.)

How many mopey cronies are brooding over President Trump’s recent decision to back out of the Paris Agreement? If you read it, there is a LOT of talk about financial support for developing member nations of the accord. The actual agreement isn’t much of anything. It’s just a bunch of feel-good altruistic ideas with no real plan or enforcement mechanism to back it up. The real issue for every member country is: what did YOUR government officials pledge exactly? And what does that entail both in regulation and cost?

The figure of $100 billion was tossed around in the time leading up to the Paris Agreement, to be dedicated to a “Green Climate Fund”. Hillary Clinton even offered up that number at a conference in Copenhagen as Secretary of State! While Clinton suggests multiple sources for funding, Obama himself sent $1 billion in taxpayer dollars to this fund… without Congressional approval.

“American negotiators were mindful of this when Secretary of State John Kerry reportedly threatened that the U.S. would walk out unless negotiators removed from the draft treaty the specification that developed countries would begin providing $100 billion a year in climate funding, by 2020.”

“Though not in the treaty, the $100 billion a year — now pushed back to 2025 — survives as a formal decision of the Paris conference (paragraph 54 of the decision document).”

So why are large OIL corporations and even Elon Musk all uppity about Trump backing out of the accord? Unto itself it doesn’t change much for them, but it is a precursory step that could remove the advantages these corporations have enjoyed for the past several years.

The Paris accord requires every participating nation to up their commitments every 5 years starting in 2020. There is even some dispute as to whether the US can actually draw down from its commitments once they make them. But the commitments being made, though there is no mechanism for enforcement for the Paris Agreement itself, are implemented by way of regulations imposed and enforced domestically.

This is how and why we got the new and improved “Clean Air Act”. These regulations make it impossible for any new competition to enter into the energy space, much less produce or manufacture anything in the United States. Put at a huge disadvantage, we would have to keep shipping that overseas to developing countries who still haven’t made a dent in their commitments to environmental soundness.

But Elon Musk and Shell and Exxon like protectionism when it suits them. Musk knows that with the withdrawal from the Paris Agreement, soon too will come a rollback of regulations that once fostered an industry safe-space for him. Not only did the regulations penalize those who didn’t meet the environmental standards, but it rewarded the likes of Musk to the tune of nearly $500 million from the US Treasury Department and another $750 million in NY taxpayer funded facilities!

So the gravy train might be ending soon for him, in much the same way it ended for Solyndra. But what about Big Oil? Why would they be so vested in the Paris Agreement? Because its “crack down” on carbon emissions favors natural gas over coal. And guess who are all heavily invested in natural gas?

Not that you need an international agreement to invest and sell natural gas. Nor do you need much help from government regulation. It sells itself. But wouldn’t it be nice to have government offering the same sort of tax credits for natural gas that they do/did for solar? Yes, it would. A little government encouragement to the customer base would be a booster to building market share. And that government encouragement would be nudged on by international commitments and pressure.

They all have their hands out for a favor and special treatment. And if that means that a couple billion in taxpayer dollars gets put into a fund for unscrupulous foreign governments to play with, then so be it! It’s for the greater good and what not. What’s a few billion dollars in tax dollars compared to 2 degrees of cooling over the course of several decades?

Say what you want about Trump – I know I do! – but right is right. He is razing corporate handouts. First with this climate business, but also with Big Ag.

Commercial farming welfare schemes run DEEP. Taxpayers have helped buy surplus blueberries, cranberries, and even cheese! That’s because the USDA’s real job is to control the price of produce, meat, and dairy. The USDA is to Agriculture what the Federal Reserve is to Currency.

While the bailouts aren’t going anywhere yet, there are serious talks about next year’s Farm Bill that will slash at least SOME of the handouts.

“…scale back some of the federal government’s largest corporate welfare programs by limiting crop insurance and commodity payments to farmers with Adjusted Gross Incomes of $500,000 or more and capping crop insurance subsidies at $40,000.” (Source: Real Clear Markets)

The numbers tell a little bit of a different story. Farming hit a record peak in 2013, and even at the height of their boom, only 2.1% of farmers made an AGI of over $500,000. Your local farmer is in no way shape or form adversely affected by these cuts. If anything, they are helped simply because the larger agricultural giants have to start paying their own way, like the little guy. According to the USDA, 72% of farms in the US never received a dime in government funding. But it was also uncovered that between 1995 and 2014 77% of USDA handouts went to 10% of the farms.

Take a wild guess what this tiny percentage of farmers are costing taxpayers in insurance and commodities pay outs? $30 billion. What about farming jobs!? Jobs is a trigger word for many people and the Ag lobbyists KNOW it. Most of the subsidies go toward less labor intensive crops. In fact, this won’t even effect the end consumer at the grocery store by any noticeable amount.

I’m not saying this is on the table, however, if all the farm subsidies were rebated back to the taxpayers proportionate to their contributions, you’d be SAVING money on groceries.

Whether it’s the Paris Agreement and its little demon spawn amendments to the “Clean Air Act” or farm subsidies, it’s not about you and I. It’s not about helping the “least among us”. It’s about stroking some political cronies with our wallets. I’m critical of ALL forms of welfare. While a couple hundred bucks in food stamps every month is a drop in the bucket when pitted against what Elon Musk has received or Big Ag, it’s still wrong.

This is American tax dollars at work. So when you or I or anyone withdraw from it in any way, we are starving the beast to the extent we can. That is a tremendous form of activism: and it’s legal.

The FCC decided to take steps in rolling back net […]