US governors are getting too comfortable with their COVID-19 emergency powers, that they might start to emulate Australia’s police state. 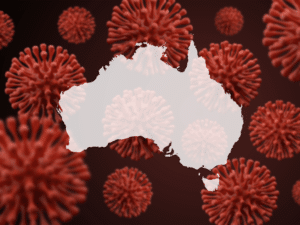 Unless you’ve been living in a cabin out in the woods, you’ve been saturated with media coverage of COVID-19.

In the U.S. and elsewhere around the globe, the word “lockdown” is commonplace. Wearing a mask is getting normalized in some places that rejected that practice after the 1918 Spanish flu.

And behind the scenes there is also something much more sinister going on. Emmanuel Rahm is most famous for summarizing it as: “Never let a good crisis go to waste.”

We’re already seeing this play out in Australia, and it could be only a matter of time before a similar dystopian nightmare worms its way into multiple U.S. states and cities.

So what’s going on in the land down under? Let’s take a look…

In Australia, even pregnant women can get arrested while at home in front of their family… for the simple “crime” of organizing a peaceful anti-lockdown protest.

According to a Spiked report on just such an arrest: “Buhler, a 28-year-old pregnant mother, was arrested at her home near Ballarat, Victoria, on Wednesday. She was handcuffed in front of her family, had her computer and phones confiscated, and was led out of her house by the police.”

You might be thinking that she was a violent person, or that she wrote some inflammatory protest propaganda. But that isn’t the case.

‘PEACEFUL PROTEST. All social-distancing measures are to be followed so we don’t get arrested please. Please wear a mask unless you have a medical reason not to. September 5th is FREEDOM DAY!’

After Buhler was taken into custody, a senior police officer was quoted as being “mostly satisfied” with the arrest.

Keep in mind, Australia has had only 770 total deaths out of a population of millions. At the time of this writing, the whole continent had only about 70 cases in one day.

So these draconian lockdowns and police responses — which includes entering homes without permission and smashing car windows to arrest dissenters — are being justified by a virus with a survival rate well over 99 percent.

The bottom line is: Australia is now a pure police state. And, unfortunately, there’s no end in sight. While it might be easy to dismiss what’s happening in Australia, that would be foolish because…

The U.S. Could Be Next

The United States is supposed to be the “land of the free.” But thanks to COVID-19, that freedom has diminished and is disappearing fast.

For example, multiple state Governments insist on endless lockdowns and mask mandates until the arrival of a vaccine. Even then, they say, things may not go back to normal.

Meanwhile, these state leaders ignore the downward trend in both case and death counts within the U.S. because they don’t want to give up their authoritarian powers.

Governor Jay Inslee of Washington State insists on keeping residents under his thumb until just about every last case of COVID-19 is gone — an outcome that will most likely never happen.

New York City’s Mayor DeBlasio stopped indoor dining altogether until such time as a vaccine is ready for the masses.

Governor Newsom of California keeps changing the rules to maintain power over the people. His latest power grab consists of a silly color chart with objectives that are impossible to reach.

#BREAKING This is the new tiered system just announced by @CAgovernor @GavinNewso to provide California counties with guidance re: re-opening. Counties must remain in each tier for a minimum of 21 days before being eligible to move into the next tier.

Each of these Governors continue to claim that “science” is on their side, and they have the “data” to back up their crazy schemes. But you’ll find that isn’t usually the case, if you take the time to review the data yourself.

There are 50 states in the Union, and right now each governor has his own “police state wet dream” to experiment with. If you live in a state with a power-tripping governor, you’re just a lab rat for his nasty experiment.

The moral of this story is, once you cede power to any government, they may not ever give it back. And that’s why you need to prepare an exit strategy…

Since many states are already drifting toward Australia-style police state tactics, it’s more important than ever to keep your options open, many of which could be outside the U.S.

It will also be critical for you to be able to safely grow your wealth out of the reach of government interference.

P.S. Don’t wait for U.S. state governors to come up with more crazy shenanigans. Become a GWP Insiders member today and learn the secrets for getting a second passport, leveraging offshore banking, and growing your wealth outside of the U.S. before it’s too late…

The CDC is pushing rental agreement contracts aside and trampling […]