With a major election cycle fast approaching, the Federal Department of Labor makes an effort to offset anti-gig work bills AB5 in California and the PRO Act on the federal level.  But will that be enough? 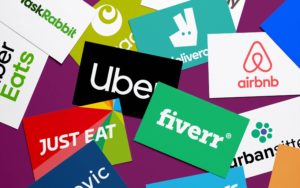 Ever hear the saying, “Freedom isn’t free”? Whoever said that doesn’t understand what freedom is because freedom is absolutely free. Tyranny is what’s expensive.

It doesn’t cost anything to leave people alone. It costs a LOT to interfere though.

When you work for money, the costs are pretty finite. Whatever tools it takes to do that job, plus your labor. Doesn’t matter what the job is: it’s parts and labor every time to one degree or another.

Businesses quote off that, and temper their pricing with what the market is currently tolerating for those goods and services.

It’s pretty straightforward, until you get the government involved. While they do nothing to earn it, they feel entitled to a cut.

When I buy something at a store, they take sales tax.

When I work as someone’s employee, they take income and FICA taxes.

When I use a utility, they charge a usage tax.

There are seemingly countless classifications for various taxes in the United States. It makes me sad to think that at one point Americans were willing to start a revolution over a 3% tea tax, and now they’ll tolerate just about any tax.

Anyway, one of the different classifications is workers.

Are the workers full time? Part time? Contract? Are they hourly? Or salaried?

Each have different entitlements under the law. There are national labor laws and state level labor laws, so they will vary by jurisdiction.

In addition to those entitlements and protections under the law, are also different classifications for how they are taxed.

While pandering politicians want to make their fight against gig workers to be about “fair wages and benefits”, the real issue isn’t about any of that.

First of all, gig workers aren’t complaining. They aren’t out marching in the streets in protest demanding they no longer work a gig job. If anything, you see gig workers complaining about the state’s intervention misguidedly on their behalf.

Second of all, and most importantly, there’s the matter of how much money the government stands to gain by simply reclassifying employees from contractor to full-time. The state of California alone has about $7 billion in potential tax revenue contingent on classifying workers as full-time rather than contract.

The battle wages on, as AB5 became law in January 2020, and Uber and Lyft recently threatened to suspend their services altogether in California unless they received more time to accommodate the state’s demands.

As I mentioned in a previous article, AB5 received some federal endorsements as well. So much so, the congressional democrats introduced the “PRO Act“, a federal version of AB5.

Elizabeth Warren was already a proponent of AB5 and eager to nationalize it. Joe Biden threw his name behind it as well.

What now? What will become of US gig workers? It’s bad enough having to leave California to take the amount of gig work you need to make your living. But what happens if that becomes a nationwide policy?

In a last ditch effort to thwart this legislation, the Federal Department of Labor is rushing a rule through to protect gig workers.

The tough part is, each state classifies workers differently because they each define “contractor” differently. California determines whether someone is a contractor by satisfying three conditions under what is called the “ABC Test“:

This would certainly defend gig workers to have a more standardized definition of what “contractors” are. I would also supersede any state definition. I’m loathed to defer to the federal government once again trampling states’ rights as well. Even when the federal government does something I’m inclined to like, I’m more nervous about making this federal because here’s the rub:

Under the Congressional Review Act, Congress has 60 days following the publication of a proposed rule to issue a joint resolution to dismiss it; the Department of Labor needs to get the rule finalized before November 20 to avoid having it dismissed by a possible Democratic Senate majority in January.

Even if they push it through in time, a Biden administration could just as easily undo it using the same powers. While it must be horrible for Californians to have to deal with AB5, they still have recourse to move to 49 other states in the union to show their disapproval.

If this becomes a federal issue, then instead of leaving the state, these gig workers might need to leave the country. I’m all for expatriation. I advocate it to anyone and everyone I come into contact with. But I understand it’s not for everyone, and I also know that I’d rather people make that choice freely than to be forced into it.

What does all this mean for gig workers? It means the next couple of months will be filled with uncertainty. And with a Biden presidency, expect to have your gig work abbreviated. If you are a gig worker who works remotely, I highly suggest looking at becoming a digital nomad and looking at the international space.

There are a lot of opportunities right now for you to test those waters, many of which are family friendly in fact. Let’s set up some time to discuss your offshore options.

US governors are getting too comfortable with their COVID-19 emergency […]