Contact tracing is the latest in surveillance monitoring and like everything else is being done in the name of “public safety”.  But is the risk more than it’s worth? 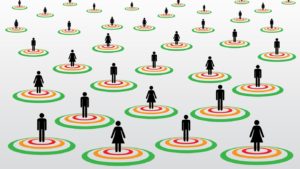 As part of the U.S. governors’ response to the COVID-19 pandemic, quite a few have decided to implement a contact tracing program.

That means if you are close enough to someone who tests positive for coronavirus, and for long enough, a contact tracer could contact you to suggest or require quarantine.

Now you might be thinking, “They can’t prove I was next to someone who has coronavirus!”

But have you considered your smartphone and its ability to track where you are at all times?

Most people don’t know this, but there is a new piece of software that could be installed on your phone right now (without your knowledge) that lays the foundation for contact tracing.

In fact, it’s already built into the operating systems of many iPhones and Androids.

As if this wasn’t bad enough, the data collected by this new contact tracing functionality could be broadcast or stolen. According to a recent report on contact tracing apps:

However, contact tracing apps have been plagued with severe security issues from the start. Some apps, such as Qatar’s have already experienced security threats, and researchers have raised legitimate fears about users’ data being broadcast and stolen.

But this gaping security problem is being ignored for now, according to the same article: “[…] most of the developers behind these apps are still not taking proper security precautions.”

If any State or Federal Government in the U.S. were to rush things, the idea that your private data should be secure could be tossed aside in the interest of speed of implementation.

Not good. And the results of the privacy study conducted in this report were alarming at best:

Similar to the financial services mobile app analysis we conducted in late 2019, it’s clear that the vast majority of contact tracing apps built and deployed by governments are not sufficiently protected against reverse engineering and potential exploitation. They are easy for hackers to decompile, attack, and even create fake clones, and are likely to lead to security breaches if they have not already.

Less than half of all apps tested passed one of six test criteria. Only one app passed the most stringent test, according to the study.

With the way the U.S. Government bungled up the Affordable Care Act website in 2010, it should raise a big red flag for anyone considering the use of a contact tracing app.

From the Guardian: “A security flaw in Qatar’s coronavirus contact-tracing app put the sensitive personal details of more than a million people at risk, according to an investigation by Amnesty International.”

This suggests there is the potential for hackers to broadcast your location to people who might be looking for infected people.

The report’s author even thinks that if a treasure-trove of your private data isn’t available for the app to cherry-pick, that’s a bad thing.

Most of my readers do not live in Qatar. So what about the U.S. and other Western nations?

In this case, according to a U.S. local news report: “Google and Apple partnered on the system, which is technically called ‘contact tracing’ but goes by the less intimidating ‘exposure notification.’”

They apparently announced plans for this back in April. It was secretly released as a software update that few users knew about. So if you have an Android or an iPhone, this update is likely installed on your phone right now.

It doesn’t do much, yet. But once contact tracing apps start rolling out, then the snoops at various State Governments in the U.S. will be jumping at the chance to get to work.

But for now, if you’re an iPhone user, go to Privacy > Health and take a look at the COVID-19 Exposure Logging feature. Once your iPhone runs the latest software update, it will be turned on by default.

You’ll want to make sure it’s turned OFF. For Android users, make sure you go to Settings > Privacy and check to be sure your location tracking is OFF. Also keep an eye on Google > COVID-19 Exposure Notifications to make sure nothing is turned on.

The bottom line is, your private life doesn’t appear to be a concern to Google, Apple, or other contact tracing app proponents.

So you’re pretty much on your own to guard your private health information.

Internet data can be used to track your exact location, eating habits, spending habits, your income, your online surfing habits, and many other parts of your private life.

P.S. Don’t wait for a contact tracer app on your phone to get exploited. Guard your private life starting now. Start by reading my report…

Inside you’ll discover how to easily go completely “off the grid,” without having to move out to a cabin in Montana. In fact, you won’t even have to leave your couch.

With a major election cycle fast approaching, the Federal Department […]