The 2018 Farm Bill, which was ushered through both houses of congress by a landslide despite its $867 Billion price tag, is just a fat welfare check with some bells and whistles on it. 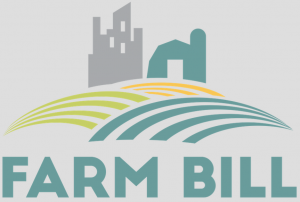 The Farm Bill passed with overwhelming support from both chambers of congress: 386-47 House and 87-13 Senate and awaits final approval from President Trump.

At a glance, here’s what’s in the bill:

I think people are supposed to be consoled by the fact that this $867 billion spend over the next ten years is supposedly deficit neutral, according to the CBO (Congressional Budget Office). But it’s the status quo, and nothing was good about that to begin with.

The Farm Bill is notorious for its cronyism, and rarely receives any criticism for it. This is the status quo that has received bipartisan support since 1933: “From 1996 to 2016, the top 10 percent of the companies that received the Farm Bill’s commodity subsidies — the biggest operations in sales — accounted for 77 percent of the total. This year’s bill continues to offer enormous subsidies to large corporations rather than prioritizing the needs of struggling small farmers. Farms in the top 10 percent for crop sales received 68 percent of all crop insurance subsidies in 2014.”

Why don’t we just call the Farm Bill what it really is? It’s a big fat welfare check with a few bells and whistles? Not just any welfare check, one that abates the guilt of the privileged politicians, but still provides for those responsible for getting them into office.

It’s hypocritical no matter how you slice it: wanting food stamp reforms but broadening the subsidy loopholes isn’t welfare reform. It’s redistribution of the redistribution! And the compromise in all this was to keep BOTH the food stamps AND the expanded subsidy programs!

Prior to Donald Trump ever winning the presidency, American farmers entered a severe recession. 2018 marks the fifth consecutive year of this recession. Doubling down on that is Trump’s tariffs.

The Farm Bill flips a coin toward small and midlevel farmers. Oh, here’s some funding for your farmers’ markets! But what about the Commodity Promotion Act? The one that allows the Secretary of Agriculture to create promotional programs for products like Milk, or Washington Apples, or California Grapes? Where do you suppose the funding for such industrial marketing comes from? These farmers.

While Alta Dena or Knudsen might be okay to pay into the advertising slush fund, Bob’s Small Dairy might not. Or they might not even consider themselves to be in the same competitive set as large commercial milk farmers and would rather spend their marketing dollars separating themselves from them in their messaging. Institute for Justice fought a case like this for Joseph and Brenda Cochran and lost.

What about the laws restricting how many tart cherries can be produced and sold domestically? The law that had one Michigan farmer forced to literally dump 40,000 perfectly good cherries on the ground to rot, to make way for 200 million pounds of imported cherries.

“Crop yield also varies significantly from year to year. That’s one of the reasons the U.S. Department of Agriculture imposes an order on the industry, which growers and processors regularly agree to, that limits the amount of cherries that can be sold each year to match demand. The goal is to keep prices more stable for farmers.”

It’s not one farmer one vote on this supposed “regularly agreed to limit”. Your number of votes is commensurate the volume you produce! So smaller farmers who might have a good harvest one year, can’t sell any more than the agreed amount.

Farmers must deal with aesthetic standards for their produce as well. That is, if their potatoes aren’t pretty enough, they can’t be sold. This is such a problem, that in the US alone, up to 40% of food that’s produced never gets eaten. 800 to 900 million tons of produce each year rot away because they are not ideal in shape or size.

I don’t know what it is about the military and Big Ag, but these are two expensive government-controlled industries that never seem to get much push back from elected officials. The Farm Bill gets peddled as some sort of “feeding America” salvo. Like without it, we’d all be starving. The fact is, it’s some arcane relic from the post-depression era that has become so bloated, convoluted and multifaceted (not much different than defense spending) that no one knows how to reign it in.

When I talk about “out of control spending”, I’m not kidding. Those guys in congress really have NO control and the bill is just getting passed on to unborn generations without ever addressing a single real problem.

December 12,2018 Interview with Mikkel Thorup from the Expat Money […]