The government is controlling so much of healthcare, that it’s forcing a free market solution. 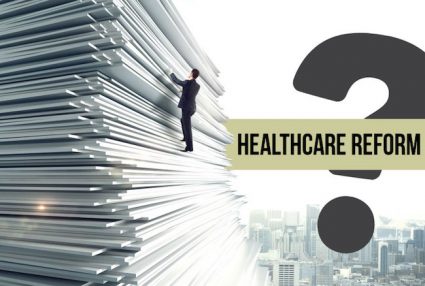 It wasn’t that long ago really when the United States had a far more free market based healthcare system. Less than one hundred years ago, people were getting healthcare and it was quite affordable. It was largely a mix of cash and mutual aid. It was highly competitive and really reasonably priced because doctors were competing for lodge practice contracts.

Once government introduced some form of healthcare system and institution, lodge practices dwindled away. In a crony effort between the government and the American Medical Association, doctors were strong-armed into leaving the lodge practices for a more standardized form of practice.

An example of this is still around today. It’s NOT insurance because it’s not a risk pool predicated on the hedge that nothing will go wrong. It’s based on the assumption that usual maintenance will be required, and so funds are pooled.

The first example is that of what now comprises the “religious exemption” to Obamacare. They are often called healthcare sharing ministries, they operate as a very similar model to a mutual aid fraternity. People pay in, and on an as-needed basis, their needs are serviced and met, paid out of the general fund. Obviously, this model needn’t be reserved for the religious. It is only this way because it operates as one of the exemptions of the ACA.

The second is something like a concierge service. Again, it’s not insurance. It is a list of basic services covered by a flat monthly fee. This isn’t for major procedures, but it does cover annual check-ups, minor out-patient procedures, testing and screening, and routine visits. It is membership based.

“Generally, 40 percent of a physician’s overhead costs are insurance-related, which pushes doctors see more patients to help cover these costs,” as Dr. Todd Johnson discovered in Lincoln, Nebraska. This prompted him to go off the insurance grid entirely.

Even if we take into account inflation, the rate at which the cost of services has gone up in healthcare is as disproportionate as that of university tuitions. Here’s an example from 1948: 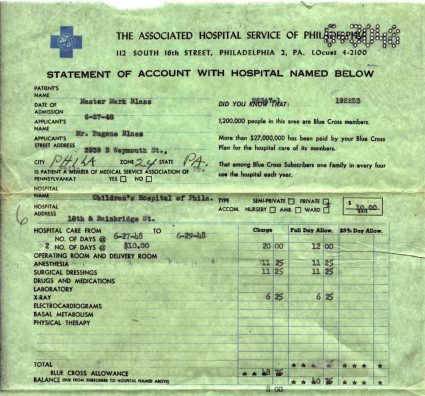 I went online to find an inflation calculator and $1 in 1948 is roughly $10 in 2017. So move the decimal point over one space to the right, and you have what it SHOULD be today. But that’s nowhere NEAR what it is today in the United States, is it? This isn’t just an inflation problem from the standpoint of the Federal Reserve. This is an inflation problem stemming from various other segments of government which is very unique to the healthcare industry.

Obamacare advocates and defenders insist it will be a national tragedy if repealed, but to be fair it’s only been in full effect for about three years. Is it really that hard to imagine your life waaaaaay back in the dark ages of 2014? Back when our national premiums were about 20% lower? There are plenty in the middle class that would take a 3 year way-back machine trip for that discount now!

Throughout the history of America’s healthcare, the gravest examples have been used to sell reform. But thus far, reforms have done nothing to make healthcare affordable again. The focus has been on number of people with coverage rather than increasing affordable access. The ACA has been the most clear contemporary example of this.

The real tragedy is that insurance companies are being blamed for the increase in costs. That’s not a very accurate assessment, and therefore any solutions stemming from that will equally miss the mark. I’m not saying insurance is totally innocent here, but if you break it down, the one thing insurance companies do NOT do is set price of services. They pay out. Their pricing is set by the level of risk plus their margins.

Hospitals and care providers set the pricing for their services. Not only do they set the pricing, they also itemize according to a series of billing codes. Not only is the cost of services then billed, but built into that is the cost of staff to process each claim. Insurance companies regularly try to negotiate breaks in price and discounts, but even then, the costs are high. People are so used to having the insurance companies pay for it, they don’t even think to look for fraudulent overcharges!

To me, wrong is wrong, so I don’t care WHO blows the whistle. Ralph Nader is one of the few political advocates out there who decries the fraudulent billing practices of hospitals and care providers:

“Start with the fact that about eighty percent of all medical bills contain errors, with the average error being $1,300. Most of these overbillings favor, unsurprisingly, the sellers (euphemistically called “the providers”). Ms. [Pat] Palmer says the situation has been getting worse. With the number of diagnostic codes growing from 17,000 to about 60,000 under Obamacare, to supposedly improve efficiency, the system has become even more complicated, with hospitals and few others knowing how to game or beat the system.” (Source: Nader.org and Pat Palmer founder of Medical Billing Advocates of America)

Still think this is the horrible insurance companies? Insurance has its place in the market. It’s meant for those outrageous, unforeseen, terrible things that the average healthy person could never anticipate happening. It’s not a replacement for care. It’s not a bottomless trust fund for the already sick. Geico won’t insure a crashed car; why would anyone expect Aetna to insure a person with a preexisting condition?

But here’s a spark of unexpected hope! The more the government squeezes, the more the markets respond.   Obviously it doesn’t take much to improve upon the quality of fraudulent billers and HMOs that treat you like cattle on a commercial farm. In addition to the membership based general practitioners, private non-insurance based surgical practices have come up in the market too:

“The Surgery Center of Oklahoma, among the first in the country to post its prices online in 2008, saw an uptick in business after Obamacare. ‘I guess it’s ironic that Obamacare created this market for us,’ [Dr. Keith] Smith says, with a laugh.” (Source: Time)

In one case, a man stumbled across this disparity in pricing while shopping around for knee surgery. After receiving various quotes from different hospitals around the United States that ranged from $40,000 to $60,000 for the same procedure – which didn’t include the cost of the stay or anesthesiologists, much less the cost of travelling there and back – he found the Surgery Center of Oklahoma. They just posted the costs online. They don’t accept insurance, but what he got for the money was hands down the best value. The entire procedure, including his costs to stay in a hotel for recovery, post-op medication and supplies, AS WELL AS his round trip ticket there and back, was $19,000. While a large sum of money, it was a far cry from the non-inclusive quotes and ranges he received from other hospitals that are on the insurance grid.

Insurance should not be for everything. So if the Republican replacement manages to just allow for catastrophic coverage across state lines and lifts the mandates, we would be better off. With a catastrophic plan, a membership plan through an off-grid doctor, and health savings account, you could see overall national outlay for healthcare costs plummet.

The mess created over the years by various government policies, and exacerbated by the Obama administration, has the free market  reintroducing its solutions that were always there. Moving away from insurance and government. Putting the control back into the hands of the patients and consumers. Likewise, putting insurance back into its rightful role in the marketplace of being a hedge against sickness rather than a blank check for care.

Venezuela and Greece become the modern-day examples for what economic […]