The IRS is not only inefficient, it is ruthless and calculating. Prepare to go through the IRS to leave the country! 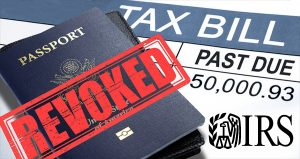 The IRS is the collections agency of Congress. Whereas in MOST cases you owe someone money for goods, services, or because you deliberately took out a loan; in the case of the US Government, you owe money for simply being productive.

So, in addition to the US being $21 trillion in debt, individuals are also in debt the moment they earn a dollar.

The irony of the IRS chasing down private citizens to pay their “fair share” while the US is $21 trillion in debt – 67.5% of which is held by the very taxpayer they are hunting – has not gone unnoticed.

One of the many great follies of government is that it’s NOT run like a profitable business. Every employee is in a “just doing my job” silo, so no one is accountable for the unsustainable consequences of their collective actions.

Border control costs, for example, run in the tens of billions… only to prevent 11 million immigrants from collecting a couple billion in welfare. If it were really about being cost efficient, legislators would end welfare. The argument is that border control is “protecting the country”. If by “country” they mean “welfare state” then sure. But if they think they are protecting people, property, or the economy, they would be dead wrong.

The same goes for tariffs. As the gap between the US and other countries’ tariffs was closing, Trump thought it a good idea to throw a wrench in the works and jack up tariffs. US farmers went from being profitable to collecting a $12 billion taxpayer funded bailout. It’s not about being profitable.

The IRS is no exception. While it is meant to enforce the income taxes leveled by congress, it is NOT required to be efficient – or for that matter very effective – at it. For a third time, the IRS was charged to hire private collections services to obtain unpaid taxes; and for a third time they spent more than they were able to collect. According to the Taxpayer Advocate Service, the IRS spent $20 million for this private collection service, and only managed to generate $6.7 million in revenues out of the $920 million they were supposed to collect.

Lower income individuals were supposed to be exempt from these collections, but instead they targeted people with a median income of $14,365 per year.

So, to recap: Congress spent $20 million to collect $6.7 million. This is American taxpayer dollars HARD at work.

If efficiency, effectiveness, and profitability aren’t the objectives, then what is? Arguably, the endgame is control.

There’s been a lot of focus on immigration enforcement for the purposes of keeping people out. As stated before, the US needs to keep poor people out so as not to further strain the welfare doles. But the protection of the welfare state is a two-way street. You can’t JUST prevent immigration and call the problem solved. You must also prevent emigration.

Stopping poor migrants from getting on food stamps is all well and good, but who will fund everything for everyone else?

“[T]he Republican-controlled Congress handed the Internal Revenue Service the power to strip individuals of one of the most important and tangible rights possessed by American citizens – their passports. The Service is now starting to use this hammer.”

This was passed under an infrastructure bill called the “FAST Act” (Fixing America’s Surface Transportation). It seems unrelated until you realize that in order to pay for this ambitious bill, funding solutions were needed: funding solutions such as this IRS provision.

Emigration threatens the largess, albeit the US is one of two nations in the world that can tax its persons (not just citizens) outside their borders. Despite the trope offered by anti-immigration zealots, it’s not the lazy who pack their stuff and haul out. It’s the disenfranchised productive folks who do this; or who I often call “economic refugees”.

You don’t just see it manifesting internationally, you see it domestically. The exodus out of California to lower tax states is just one of many examples. Businesses setting up corporate structures in Wyoming and New Mexico (even though they are not in those states) serves as yet another example.

Being an expat myself, I can easily attest to this. I left before the Great Tax Cut of 2017, but I still have no intention of coming back permanently. My tax obligations are considerably lower by remaining an expatriate, and knowing how American politics work, Trump’s tax cuts (while I applaud them) are not long for this world.

Freedom of movement is a fundamental and natural right; and has been confirmed as such by the SCOTUS. To put discretion of such a right into the hands of such a corrupt agency as the IRS is reprehensible. The FAST Act was passed in 2015… in the wake of discovering the IRS was targeting conservative non-profits.

The IRS was given explicit instruction to NOT target low-income individuals with the private collection services. Did they heed? Nope.

If the IRS can get away with that, imagine what it can do with this!

It starts with passports. Which unto itself is wrong. But what about federal background checks for to get a job, to acquire a firearm, or to adopt a child? Can the IRS hold that up too? If rights can only be suspended through due process, what due process is there prior to the IRS imposing these restraints on American persons?

If this doesn’t alert you to the importance of a second passport, I don’t know what will. It’s easy to laugh at government folly because it’s generally expected. But if there is one thing the government is ruthless about it is enforcement.

The latest ruling from the US Circuit Court of Appeals […]