The latest ruling from the US Circuit Court of Appeals confirms that not only is there an egregious double standard in how the TSA comports itself, but in some cases, material possessions have more protection under the law than your physical person. 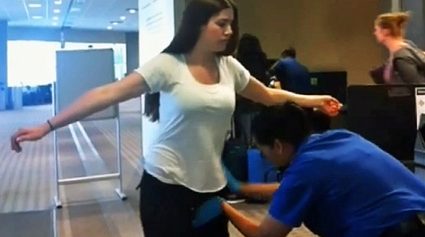 I’ve long criticized the double standards of the government.

If I hold you up at gun-point and demand 25% of your income, with the promise that some of it might help someone out, I’m charged with armed robbery. The IRS – a private entity – does the same thing at the behest of Congress, and that’s you paying your fair share.

If I decide to reside in a country, I’m an illegal immigrant and intruder. If the government does it, it’s a noble act of freedom, an overseas contingency operation, and an acceptable indefinite occupation.

If I demand $300 from you for going too fast on an empty highway, “or else”, that’s extortion. If the government does it, you were violating the vehicular codes, and have somehow transgressed the People of the state.

They even get their own special language for their criminality. When I do it, it’s theft. When they do it it’s taxation. When it becomes more overt, it gets harder to tolerate. I still fly back stateside from time to time, and I cringe at what the TSA has become.

The countless videos of people getting groped, children having their snow globe souvenirs taken away after a fun trip to Disney World, old ladies being detained, all by an agency with a miserable success rate at keeping anyone safe from anything, but a remarkably HIGH success rate of perpetrating real crimes.

I’ll be honest, I don’t know if the government is more brazen and getting away with more than before, or if technology is simply bringing to light the government’s preexisting corrupt condition. Seeing Eric Holder get away with “Fast and Furious”, seeing Hillary get away with Benghazi, seeing Obama get away with Solyndra, and watching as local police walk away from what would otherwise be considered voluntary manslaughter if not outright murder, has me angry that government employees get entirely different treatment than civilians for the same acts.

The TSA has proven to be less than trustworthy:

“A TSA agent convicted of stealing more than $800,000 worth of goods from travelers said this type of theft is ‘commonplace’ among airport security. Almost 400 TSA officers have been fired for stealing from passengers since 2003.”

Sadly, the article referenced here was written 5 years ago… which means these numbers are wildly understated. Also, the fact that they can be charged and convicted for theft is interesting because a recent ruling out of the US Circuit Court of Appeals in Philadelphia found that TSA employees can grope away, without consequence or criminal charge.

Basically, your material possessions have greater protection under the law, than your physical person. That’s where we are at, folks.

It starts with a woman by the name of Nadine Pellegrino. In 2006, Pellegrino was randomly selected for an additional search of her person by the TSA. She didn’t like the direction the search was going, objected, and things escalated from there. She was subjected to 18 hours in jail, with criminal charges filed against her. She was acquitted in 2008.

But the US Circuit Court of Appeals ruled that TSA screeners are immune from claims concerning assault, false arrests, and other abuses.

This is due to a law on the books called the FTCA, or Federal Tort Claims Act.

You might be wondering like I am, “So, checkpoints aren’t actually investigations into anything?” No. The court found that TSA searches were analogous to “routine administrative inspections”. Only in a courtroom can words be over-parsed to the point of undoing language itself.

Check out the defense’s response to the ruling, though:

“U.S. Attorney William McSwain in Philadelphia, whose office defended TSA screeners, said the decision reflected Congress’ desire to balance the government’s sovereign immunity and ‘duty to protect taxpayer dollars’ against the need to provide remedies for some plaintiffs.”

What an odd time for the government to play the fiscally prudent card.

Is this because the reputation of this agency’s criminal propensities precedes them and therefore make them a known liability?

So far, we have warrantless searches, physical touching and groping, and theft by government agents happening on a regular basis, and very little recourse. All of these civil liberties were traded in, so that maybe we might catch a terrorist. But how do you catch a terrorist given this:

“The House Oversight Committee is investigating allegations TSA officials gave hefty bonuses to supervisors who ignored security warnings and retaliated against employees who spoke up by reassigning them and giving them negative performance reviews. Dozens of TSA employees have come forward to speak with congressional investigators about abuses of power.”

There seems to be no real accountability in this agency internally or externally. Internally, employees face retribution for trying to do the right thing. Externally, individuals have no recourse.

I don’t appreciate the double standard one bit. I don’t want anyone getting away with violating people’s rights on any level. If civil society intends to hold private individuals accountable for assault, molesting, harassment, theft, and slander, then so too should every government agent charged to purportedly keep us “safe”.

The global response to erratic US policies is to find […]