IRS Stops Seizing Assets – But DOJ Still Does THIS…

IRS Stops Seizing Assets – But DOJ Still Does THIS…

The IRS has abused asset forfeiture for years, extorting small businesses under the guise of national security.  But no more!  Now only the DOJ has that honor. 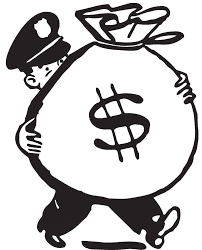 After the innocent store owner battled to get his money back, the IRS made an offer similar to the “protection money” offers Al Capone made when his mafia ran the streets of Chicago in the 1920s.

Forbes described the mafia-like offer… “At one point, the IRS offered to give him half his money back if he would sign away the other half.”

What you’ve just read about is one example of something in the U.S. called civil asset forfeiture. It was reported that between 2007 and 2013 the IRS made off with $43 million from 618 such cases.

They did it all the time, seizing money in bank accounts for the “fuzzy crime” of “structuring.” It worked something like this…

The IRS watched for deposits of $10,000 or more in bank accounts in order to keep an eye out for terrorists and other extreme criminals. Any bank would have to report any deposits that met this amount.

But some banking customers, like small business owners for example, make quite a few deposits that get “close” to this amount, but don’t exceed $10,000. This behavior, even if it was innocent, catches the IRS’s attention.

Small business owners like Lynden McLellan unknowingly fall victim to “structuring” and then suffer mafia-like bullying. The list of victims who’ve suffered losses due to IRS-mandated civil asset forfeitures include:

As individual cases of civil asset forfeiture were publicized, Americans became outraged and a new law was signed that now prevents the IRS from acting like the “Capone” of the U.S. Government.

Unfortunately, when it comes to the U.S. Government, there is always another branch that reminds us it’s still risky to keep all of your cash in the United States.

“New Laws for Me, But Not for Thee”

The new law that forces the IRS to actually justify its actions when it wants to seize assets under “structuring” don’t apply to another powerful branch of the U.S. Government…

The Department of Justice.

A campaign initiated by the Institute for Justice helped “convince” the IRS to grant 84% of the “give my money back” petitions that it received. But the DOJ is another story…

Even though the IRS recommended the DOJ also be generous by returning funds, it mostly refused. Reason reports:

Of the 256 petitions related to cases involving the DOJ, the IRS recommended that the department grant 194. But as of last summer, the DOJ had accepted just 41 petitions, or 21 percent, “and refused to return more than $22.2 million.”

It appears the DOJ gets a free pass to steal money from innocent victims — no consequences! While that’s a terrifying thought, at least you have the freedom to choose where you keep your money…

How to Keep Your Options and Exits Open

Today, it’s more important than ever to shield your money from alphabet agencies, lawmakers, and central banks. It’s also critical that you safely grow your wealth.

P.S. Even if laws are passed to protect U.S. citizens from losing their life savings to greedy overzealous agencies (like the IRS and DOJ), it appears enforcement will still be a big problem. Become a GWP Insiders member today and learn the secrets for protecting and growing your wealth outside of the U.S. before it’s too late…

Protect Your Cash: Don’t Carry Any!

Imagine being presumed guilty of money laundering, tax evasion, or […]