The IRS is getting a windfall from the “American Families Plan” for more enforcement staffing… 87,000 more enforcers in fact. 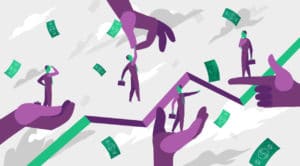 In the United States, it appears like another Founder’s Tea Party might be in order. Biden’s plans for the IRS make that clear, and here’s why…

Imagine driving up to your bank (hopefully not masked up anymore), conducting your business, and going home thinking your transaction was kept private.

Now think again, because your bank might become a “snitch” to the IRS…

As is the case with most Government plans, the initial intention behind the plan seems innocent enough, but opens the door for more invasive “plans” later on. Much like the 2001 Patriot Act opened the door for illegal surveillance of Americans by the NSA. If Snowden hadn’t blown the whistle, that “plan” would be much more active today.

Biden’s latest plan would turn your bank into an IRS snitch by making them report investments, dividend, and interest income behind your back:

“Providing the IRS this information will help improve audit selection so it can better target its enforcement activity on the most suspect evaders, avoiding unnecessary (and costly) audits of ordinary taxpayers,” the Treasury Department said Wednesday.

What’s funny about using language like “the most suspect evaders” is the IRS can target political dissidents or whoever else that the U.S. Government deems worthy of the vague description.

In the future, that could include you. Especially if you like to move your money around, keep more wealth for yourself, and keep it away from greedy politicians and the IRS.

According to Banking Dive: “Larry Summers, a Harvard University professor who served as Treasury secretary during the Clinton administration, said the extra information would help auditors find dissonance between a taxpayer’s business and bank statement.”

Mr. Summers wants the Government to have unlimited license to take a peek at your books whenever they want. Even if, like most people, you operate “above board.” Something tells me he won’t get the same treatment, however.

And if you think you can hide a portion of your income by using cryptocurrency, the IRS is going after that too…

Dan Fort, former chief of the IRS Criminal Division, made what reads like an overt threat to taxpayers who take some of their income in the form of cryptocurrency like Bitcoin:

“With these summonses and other actions, the IRS is mounting a full-court press to show taxpayers how seriously it takes cryptocurrency compliance. […] Taxpayers should take it seriously too.”

The IRS has already seized “$13 million from crypto holders with more than $20,000” in a Coinbase sting. The agency also appears to be focusing efforts on another exchange called Kraken, where it wants to vacuum up “phone numbers and email addresses as well as the customer’s name, date of birth, taxpayer ID number, and physical address.”

And if you think the IRS is still “understaffed” and won’t be able to catch U.S. taxpayers off guard, Biden is “helping” with that too…

The Administration wants to leverage taxpayer dollars and doubling the size of the enforcement arm of the IRS, increasing it by 87,000 agents.

But here’s where they let the cat out of the bag: “Enforcement efforts would primarily target individuals and corporations with higher incomes and profits, the administration has suggested.”

So they’re going to penalize successful people who run successful businesses? That’s what it sounds like to me.

Quite frankly, it doesn’t matter how successful you are right now. The messaging about targeting “higher income” individuals is simply to appease the poor and middle class. But the IRS will inevitably move the goalposts and go after whoever they damn well please.

Bottom line: The IRS is coming after you sooner or later. With 87,000 new agents eager to prove themselves, it’s only a matter of time. Which is why now is an excellent time to get your “plan B” ready…

Before the IRS Targets Your Income!

During that time, I’ve also learned dozens of valuable lessons about how to maintain my independence free from IRS agents, “ethically challenged” Government officials, and other snoops.

P.S. You can avoid the next wave of the IRS’s overzealous tax collection practices, but you need to move fast. Here’s your next step…

Become a GWP Insiders member today to discover how to keep your income safe, along with many more secrets to secure your future no matter what happens…

De-Dollarization is a Serious Thing

It's not just a fleeting crypto phenomenon among keyboard warriors […]