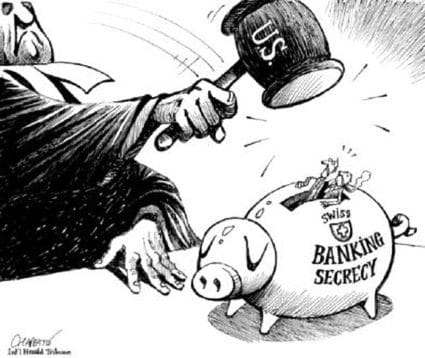 Is the cash you keep deposited in your bank account(s) actually safe? That’s a good question to ponder once in a while. One you might even consider asking your bank.

Why? There are many reasons. But today I’d like to talk about the possibility of your bank being implicated for criminal conduct.

You see, this is what recently happened to Credit Suisse. According to the whistleblower website, the coordinated effort was massive in scope:

“More than 163 journalists from 48 media outlets in 39 countries across the world spent months analyzing bank account information leaked from Credit Suisse, Switzerland’s second-largest lender. The leak included more than 18,000 accounts that held in excess of US$100 billion at their peaks. It is the only known leak of a major Swiss bank’s client data to journalists.”

The report from an anonymous source revealed that Credit Suisse clients included major figures in the criminal underworld like: “[…] a Yemeni spy chief implicated in torture, Venezuelan officials involved in a corruption scandal, and the sons of former Egyptian dictator Hosni Mubarak,” among others including human rights abusers.

According to the report, various accounts were established by some of these people as far back as the 1940s. And up to this point, they were held in confidence and nobody knew about them.

Which is what you’d expect. After all, Swiss banks have built a reputation for protecting the secrecy of their clients.

The problem is, they aren’t supposed to accept money from “criminals,” and it appears Credit Suisse was doing that.

Will Credit Suisse Be Punished?

Now I put “criminals” in quotation marks because these days you can be labeled a criminal just for disagreeing with or speaking out against the current regime.

Point is, the whistleblower is up in arms over these 18,000 accounts. And, of course, he wants the government to “do something.”

You can tell just by looking at the language the “anonymous source” uses. Check out the relevant part of this source’s statement (bolded parts mine):

“I believe that Swiss banking secrecy laws are immoral. The pretext of protecting financial privacy is merely a fig leaf covering the shameful role of Swiss banks as collaborators of tax evaders. … This situation enables corruption and starves developing countries of much-needed tax revenue.”

[…] “I am aware that having an offshore Swiss bank account does not necessarily imply tax evasion or any other financial crime. I am sure that some of the accounts … have a legitimate reason for existing or that they have been declared to tax authorities in compliance with the relevant legislation. However, it is likely that a significant number of these accounts were opened with the sole purpose of hiding their holder’s wealth.”

Notice how the “anonymous source” immediately declares the banking secrecy laws that protect a client’s privacy immoral, jumping to the conclusion they are a “fig leaf” that covers up crime in a “significant number” of accounts.

Then the source equates “hiding wealth” with probable criminal activity — a case of presumed guilt.

One wonders, is this anonymous source working with the IRS or another Government agency? Is this a witch hunt against people who value their privacy? There’s no good way to know. But if it is, there could be real world consequences for account holders — even if they’re innocent.

But regardless of what happens at Credit Suisse…

You Should Ask Yourself: Is Your Money Safe?

Almost every major bank has been wrapped up in a scandal, legal action, or even criminal activity (like Wells Fargo).

And it doesn’t really matter which side of the aisle your politics are on, or if you don’t really pay attention to politics at all. Your money is still at risk, and here’s why…

Your bank could be exposed by a whistleblower at any time, just like Credit Suisse. Your bank could be shut down after an investigation reveals criminal activity. Assets could be frozen, even if you’ve done nothing wrong.

So that begs the question, is your money truly safe?

Today, it’s more important than ever to be able to keep your money safe from whistleblowers and government snoops. And I’d like to show you how to do that.

In fact, I recently updated the entire membership area and I’m relaunching it as GWP Insiders 3.0. And, for a limited time, you can save 70% on membership. (Warning: The price is going up very soon.)

P.S. Your bank could be investigated or shut down, thanks to just one anonymous whistleblower. That, or some Government official could find a creative way to peek at your bank account…

To help you keep your money safe, I invite you to become a GWP Insiders member and learn the strategies for keeping your banking options (and exits) open…

Is Distrust the New Economic Pandemic?

Public confidence in institutions has waned in the wake of […]