The history of Labor Day finds its roots in union thuggery; but has since taken a turn toward favoring and encouraging commerce! 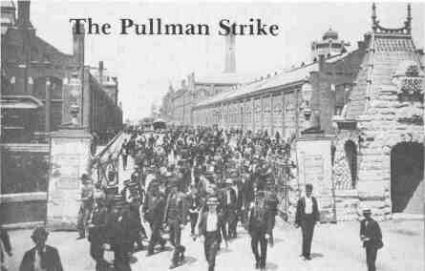 Let’s not be too quick to glaze over the history of this holiday, though. Its roots are in the Labor Movement and unions:

“On May 11, 1894, in a company town outside Chicago, employees of the railway sleeping car mastermind George Pullman went on strike when their wages didn’t go up after the economy tanked. In a show of solidarity, the American Railway Union — said to have boasted 150,000 members at the time and led by famous socialist Eugene Debs — refused to operate Pullman train cars, snarling mail delivery and prompting President Grover Cleveland to send in federal troops to break up the strike. Rioting and arson broke out, and it evolved into what’s now considered one of the bloodiest episodes in American labor history.” (Source: Time)

On June 28 1894, then president, Grover Cleveland, signed the Labor Day holiday into law. While that was his effort to ingratiate himself with the unions, it failed, but the holiday stuck.

But prior to even that, unions independently had parades and celebrations for the working class. Several states were already observing the first Monday of September as “Labor Day” prior the federal government making it a national holiday.

(Side bar: that trend continues with several social movements, where the states carry out the wishes of the people and the federal government lags years behind the curve to catch up. Marijuana laws being one of them. Several states have legalized pot. The federal government might eventually catch up a few years down the line… MAYBE.)

It took violence from the Pullman Strike to get the federal government’s attention, but remember the holiday was a crumb from the table to appease labor unions. It didn’t address the root issues of the unions whatsoever. To give you an idea of how condescending this holiday really is to the working class have a read of this excerpt from Rep. Lawrence McGann (D-IL), who sat on the Committee on Labor:

“By making one day in each year a public holiday for the benefit of workingmen the equality and dignity of labor is emphasized. Nothing is more important to the public weal than that the nobility of labor be maintained. So long as the laboring man can feel that he holds an honorable as well as useful place in the body politic, so long will he be a loyal and faithful citizen.”

Labor Day really amounts to one big national participation award. This is precisely why I find some redemption in the fact that businesses have found a way to actually profit from it! Shutting down production is economically stupid. Keeping production going while celebrating, now THERE is a tribute to the worker!

It’s important to point out that I’m all for free association. That’s a very important component to a free and peaceful society. But free association doesn’t mean it can be used to carry out bullying and intimidation tactics against peaceful agents, which is what gangs and unions do.

Sharing common interests is all well and good. Trying to promote those ideas and ideals is also fine. But the tactics used by labor unions is anything BUT peaceful. Violent riots and strikes, harsh intimidation tactics, and strong arming has not done much for the working class, but for one reason or another, unions have gotten a pass for this sort of behavior.

Unions are protectionist in nature. Ironically, protectionism is the last thing that will help the working class. Competition is the real solution to better working conditions; in the same way competition is the solution to shoddy service and poor quality goods and even inequitable pricing. However, unions are why Bernie Sanders opposed illegal immigration. Can’t have that cheap labor suppressing wages of our union workers! Unions sought exemption from Obamacare, among other laws, because they were negotiating their own collective bargaining packages for their workers. Unions haven’t fostered growth, but rather preserved under performance. One such example is the “Rubber Room”.

Ever wonder why police officers get paid administrative leave rather than fired from their jobs for misconduct? It’s their union protections.

What do you think has California fiscally underwater? People like to blame illegal immigrants and welfare. They would only be half right… and it’s not the welfare you think it is. Government employees and their benefit and pension packages negotiated by their respective unions are why California is underwater.

If the union value proposition was any good, or even if it had a history of helping the working class, then shouldn’t their numbers be up? It is up… in the public (government) sector. But the numbers are down overall, and especially in the private sector, according to the Bureau of Labor Statistics’ chart below: 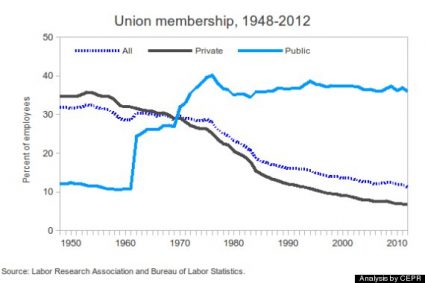 In fact, care to guess which union is the largest in the United States? The National Education Association is currently 3 million strong.

Unions have done away with the meritocracy, and homogenized workers as being equal. But they aren’t equal. Some are more talented, more dedicated, more efficient, and more willing to work under different conditions than others. Unions have a system based on solidarity and seniority: two things that are entirely irrelevant to any trade.

Union advocates tell us to thank the unions for the 40 hour work week and weekends. That’s utter nonsense! There’s a market driven reason behind the 40 hour work week that has nothing to do with feigned benevolence or concerted collective bargaining. Before unions thought of it, Henry Ford saw the importance of leisure to the work force and consumer base. If you don’t have time to enjoy it, you won’t buy it:

“Leisure is an indispensable ingredient in a growing consumer market because working people need to have enough free time to find uses for consumer products, including automobiles.” ~ Henry Ford in an interview with “World’s Work” in 1926.

So a very selfish reason to a seemingly “pro worker” policy introduced and implemented by the free market without government or union coercion.

Businesses need the freedom to experiment with what maximizes productivity in their space and industry. Standardization of these things isn’t going to work. Even unions don’t want to join in on the standardized regulations in many cases.

Fostering a free market place rich with competition and choice is what will ultimately protect workers and consumers from bad actors. Likewise, it will allow businesses to operate profitably and be accountable to its consumer base and its talent base.

You want to celebrate Labor Day? Grill that meat. Take advantage of all the sales. You want to recognize the working class? Engage them in commerce and thank them with your patronage and raving reviews! Celebrate the market, because it’s the market that supplies and demands jobs. It’s the market that rewards greatness and punishes failure.