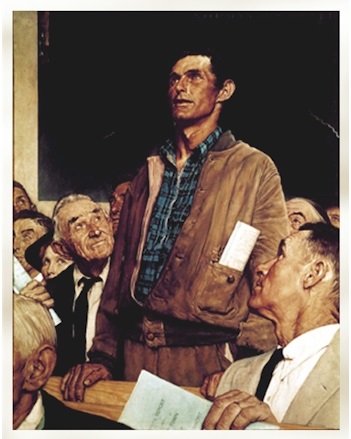 Presidential administrations targeting dissenters is not a new phenomenon; but technology has enabled a whole new level of persecution.

As far back as Woodrow Wilson, and as recent as Barack Obama, dissenters have been targeted by various administrations.

Wilson created an entire department called the “American Protective League”. It was basically a group of private citizens who collaborated with the federal government targeting dissenters of the Wilson administration. By targeting, I mean warrantless searches and interrogations. Jonah Goldberg writes:

“Under the Espionage Act of 1917 and the Sedition Act of 1918, Wilson’s administration shut down newspapers and magazines at an astounding pace. Indeed, any criticism of the government, even in your own home, could earn you a prison sentence. One man was brought to trial for explaining in his own home why he didn’t want to buy Liberty Bonds.”

Barack Obama’s administration had everything from the [email protected] email campaign (thankfully, it was short-lived). But it didn’t stop there! We provided a list of actions taken by that administration against dissenters, including, but not limited to, the IRS scandal in denying conservative groups their tax-exempt status, but the EPA denying FOIA requests from conservatives.

This isn’t unique to democrats, by the way. The US government has developed a very elaborate spying program on its own citizens called PRISM. Our government likes to play fast and loose with terms for the purposes of utility.

So what constitutes a “domestic terrorist”? Are you envisioning militant men in their mid-thirties and early forties? Well-armed? Perhaps they use words like sovereign and make incoherent grumbles about some gold fringe on a flag?

What if I were to tell you, it’s more like an 82 year old nun and two veterans in their mid-fifties? Unarmed. Spray painting peace signs on a nuclear arms facility in Tennessee? We wrote about them a while back. What these three did absolutely broke the law. But it went from maybe $1,000 fine and a year in jail for trespassing, to 35 years for domestic terrorism.

Now we have the Trump administration targeting the protesters of his inauguration:

“Web hoster, DreamHost, says it has been asked to hand over more than 1.3 million IP addresses on visitors to a site that helped organize anti-Trump protests earlier this year. It published a search warrant Monday signed July 12th, in which a District of Colombia court said DreamHost had to hand over records from disruptj20.org covering “the individuals who participated, planned, organized, or incited the January 20 riot,” Trump’s inauguration day.”

DeamHost is contesting this warrant on the grounds that it is too vague. It is essentially looking for information on anyone who so much as visited the site!  Included in their response:

“DreamHost notes that a week after the inauguration, it had already provided registration details for the owners of disruptj20.org.”

So the actual organizers’ information has already been turned over. But the government wants to cast an even larger net.

Chris Ghazarian, DreamHost general counsel says, “Our companies shouldn’t have to worry about untargeted, mass collections of user data by the government; nor should our citizens be dissuaded from legally exercising their associational freedoms for risk of being exposed.”

While I agree with that sentiment, he’s a little late to the party.

If there was ONE immutable lesson to be gleaned from Edwards Snowden’s revelations, it’s that if the government can’t get what it wants though legitimate or voluntary means, they just come and take it anyway.

I want to point out that security measures are often put into place because there is a criminal element out there seeking to violate your rights. That’s why we have locks on our doors, car alarms, and passwords.

Here’s the interesting part: the government is one of the biggest criminal organizations that has spurred some of the greatest security measures out there.

Today, nearly everyone has a means of recording their dealings with the police… which offers at least some level of transparency. Cops and other criminals are less likely to behave criminally when they know they are being recorded. Not ALWAYS, but more likely.

And VPNs offer a layer of privacy for the internet user. You aren’t getting 100% anonymity on the internet. But you can get layers of privacy to protect you. As I always say: no silver bullets in the protection and self-defense game, but there deterrents a plenty!

The important part here is: privacy is worth protecting. There are those who contend, “If you you’ve done nothing wrong, you have nothing to worry about.” The thing is, the word “wrong” is much like “domestic terrorism” in the hands of government: it has a very wide breadth in its interpretation.

The issue isn’t about what you think I’m doing or your opinion of it. The issue is do you have probable cause to believe I am involved in a crime involving victims. If you do, then get the necessary warrants that specify what you are looking for. If you don’t, then no. You don’t get to go on a fishing expedition.

You close the door to dressing rooms and restrooms when you use them. Not because trying clothes on or going to the bathroom is wrong, but because it’s not anyone’s business to watch you do either of those things.

And that’s what a VPN offers: a closed door to your activity. We collaborate with a company called Cyberghost. They offer a free trial of their VPN service as well as a good amount of information on how VPNs work and what they can do to offer you another layer of protection.

Click here now to visit their site and start your free trial!

Cryptocurrencies are further scrutinized by the same government that claims […]