If China’s crypto-yuan takes off, what does that mean for those in the traditional banking system now? 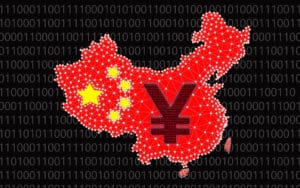 Who would have thought that a simple idea shared with the world in 2009 would eventually be altered and leveraged by China to upend banking as we know it?

Well, the time has come, and if you have any of your money in the “traditional” banking system… the time is now for you to get prepared.

The simple idea I’m talking about is Bitcoin, but China is taking this simple idea to a different level. According to Bloomberg, they are poised to launch their own crypto yuan as early as this year:

The crypto yuan, which may be on offer as soon as 2020, will be fully backed by the central bank of the world’s second-largest economy, drawing its value from the Chinese state’s ability to impose taxes in perpetuity. Other national authorities are bound to embrace this powerful idea.

There are a number of ways that, according to Bloomberg, “the digital yuan can disrupt both traditional banking and the post-Bretton Woods system of floating exchange rates that the world has lived with since 1973.”

One way China’s crypto could disrupt banking forever is by making an international bank ledger irrelevant. Instead the ledger is distributed in crypto transactions, so the “trust process” is made more efficient. There would no longer be a need for the network of banks in the $124 trillion international money transfer market.

That one disruption alone should make lenders nervous. But you should be nervous too, because there could be a Government monopoly on your money if China’s idea takes off.

Deposits and Lending Controlled by… Your Government?

Right now the central banking system as you know it relies on lenders that make deposits for you.

According to the same Bloomberg piece, China’s idea could potentially hand all of the banking power over your deposits to the Government itself:

A digital yuan — or Singapore dollar or Indian rupee — could bypass this system and allow any holder of the currency to have a deposit at the central bank, potentially making the state the monopoly supplier of money to retail customers.

Handing over centralized control of your money to a Government, digital or otherwise, is never a good idea. And using a digital currency like China proposes could also give any Government control over your private data associated with your transactions.

Whether you’re a political activist, or you just have a dissenting opinion that the Government doesn’t like, China’s idea could allow the government itself to simply take direct control of your money.

In the U.S. and abroad, the big banks are already corrupt enough. They have to pay billions in fines as a result.

So giving the Government even more control over the system is asking for “double trouble,” no matter how convenient it may seem.

Today, it’s more important than ever to keep your money safe. If China’s idea takes off, it will be critical that you’re able to safely grow your wealth out of reach of government interference.

P.S. Don’t wait for China’s idea to take off. Become a GWP Insiders member today and learn the secrets for leveraging the power of offshore bank and brokerage accounts, while growing your wealth outside of the U.S. before it’s too late…

Government is using private companies to pry into people's lives. […]