More Property Right Encroachment from All Levels of Government

More Property Right Encroachment from All Levels of Government

Right to private property is being attacked from just about every direction, with property owners being punished and even vilified in some cases. 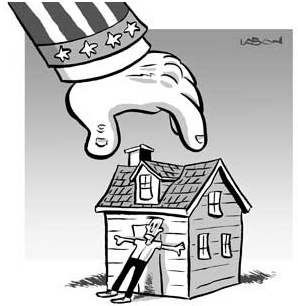 The right to property is sacrosanct and a cornerstone to individual liberty. This is a fact which has not only proven to keep the peace, but has also fostered prosperity and true progress. It’s also a fact which governments local and federal in the United States refuse to acknowledge and respect.

I do what I do because of my profound belief that individuals should absolutely keep what they legitimately acquire. Whether it was gifted, bequeathed, purchased, or paid to you is irrelevant.

We have covered a LOT of stories concerning various encroachments by the state on private property. I recently told you about this family in Wisconsin whose government decided to rezone, and declared the parcel with the river on it could not be sold separately from the parcel with the house on it.

I’m dedicating this to highlighting some recent real estate encroachments.

About five years ago, Cynithia Lopez bought a house in a community in Denver called Green Valley Ranch for $150,000. Now looking to moving into a larger home in which to raise her young daughter, she put her property up for sale as its value has increased considerably. A contract in the amount of $265,000 was set to close when everything came to a halt.

Unbeknownst to Lopez: “Out of 5,000 homes built in Green Valley Ranch, 642, including Lopez’s, were priced as affordable housing. That meant 642 homes could only be sold to buyers who qualified as low income.”

The city advised her that her house was part of this “Affordable Housing” program instituted in Denver back in 2003, which precludes her from selling her house for $265,000. Under this program, her home can only appreciate at a fixed rate of 5% per year, which roughly means she can sell her house for $186,000.

With absolutely nothing in her paperwork indicating her house was among those selected to be part of that program, she challenged the injunction against her sale. Lopez wrongly assumed the worst that could happen is she’d have to ride out the life program until it expired in 2023.

Instead, the city investigated her claim, and concluded she didn’t qualify for the Affordable Housing program, and issued a notice for her to sell her property at the prescribed $186,000 within 30 days!

The city insists her house is “worth” $186,000 and that’s all she is “allowed” sell it for, but they still taxed her property at the real market value.

Within a matter of weeks, Cynthia Lopez went from proud homeowner to potentially being evicted and losing $79,000 of equity in her home.

She is currently ensnared in a legal battle for her equity and home.

I can’t tell if this is an issue of entitlement or precedent. Perhaps a little of both, but whatever the recipe, private land owners are being made out to be the villains.

“Like many of the trails and roads that lead into U.S. Forest Service land, Trail 267 twists in and out of private properties. These sorts of paths have been used as access points for decades, but ‘No Trespassing’ signs are popping up on them with increasing frequency, along with visitors’ logs in which hikers, hunters, and Forest Service workers are instructed to sign their names, tacitly acknowledging that the trail is private and that permission for its use was granted at the private landowners’ discretion.” (Source: Bloomberg)

A little over a year ago, there was a lawsuit between Wonder Ranch – a property about 100 miles southeast of the Crazy Mountains in Montana – and the Forest Service. The Forest Service requested an easement siting precedent of historic use of that land in the capacity they requested. In a counter suit against the rightful owners, the Department of Justice produced over a century of precedent showing that the land was indeed used as trails, which ultimately lead to the Forest Service’s victory in the case.

If Wonder Ranch could have produced about five years’ worth of records showing that they only allowed access by permission only they might have won that case based on a new and more recent precedent. In fact, the government is all too aware of this loophole:

“Alex Sienkiewicz, the forest ranger overseeing the district that includes the Crazy Mountains, every year sends an email to his staff reminding them never to ask landowners’ permission to use trails that the government already considers public. ‘By asking permission,’ he wrote in last year’s reminder, ‘one undermines the public access rights and plays into their lawyers’ trap of establishing a history of permissive access.’”

The land is EITHER public or private. It can’t be both. Either the land belongs to XYZ Ranch, and XYZ Ranch is responsible for the upkeep of that land and liable for anything that transpires on it, or they aren’t. Evidently, the idea of these ranchers requiring hikers seek permission or possibly charging hikers to access the trails through their property is reprehensible.

Like botanical gardens charging admission to walk on their grounds? Like courses that charge you to ride your off-road vehicles on their land? Is this ALL up for debate? Or just wilderness ranches?

Taxpayers feeling entitled to hike through the land of private ranch owners out of convenience is the real crime here. Tax dollars entitle you to public lands not the adjacent private lands that obstruct your straight-line access to your favorite campsite.

There is a lot of discussion about downsizing federal lands and returning portions of it back to the states. The objection to this is that the states might just sell off the land to the highest bidder if they are in a financial bind.

Again, I’m really struggling to see the problem with either of these: paying for access to private property and states selling off land to private buyers.  If this land should be free of charge, and selling access to it is so bad, that we have to deny private owners and states any right to it, then how does the federal government explain this: 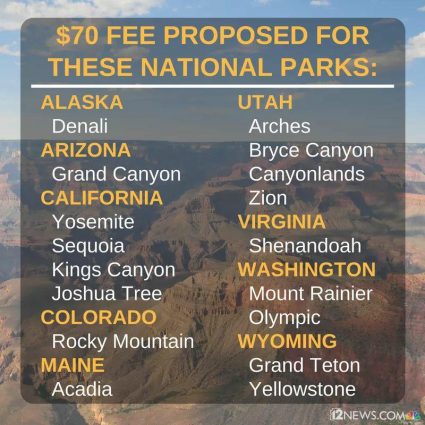 The governments of and within the United States have a very LONG and sordid history of welshing on their property contracts. First with the Native Americans, then with all Americans. Like slavery, it wasn’t abolished, it was expanded.

Republicans have a narrow majority in Congress but even amongst […]