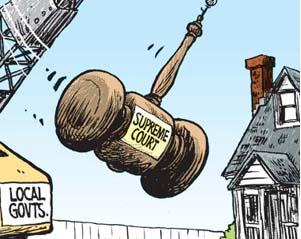 On June 23, 2017 the Supreme Court made a ruling that undermines property rights by allowing governments to avoid just compensation for private land for public use.

The 5th Amendment to the Constitution clearly states:

“…nor shall private property be taken for public use, without just compensation.”

So imagine taking the word “just” out of that clause. Eminent domain laws have typically interpreted “just” as being “fair market value”. Even then, it’s arguable that burden is often not met. Still, there was at least the pretense!

The case is Murr vs Wisconsin.

Two parcels of land were bought by the Murr family back in the 1960’s. One parcel was developed with a cabin, the other was left undeveloped. To make improvements on the cabin, the heirs and rightful owners of that property, Donna Murr and her siblings, decided to sell the undeveloped parcel.

Unbeknown to them, sometime in the 1980’s, the state of Wisconsin passed a law that restricted land use next to rivers like the one their parcel was adjacent to. Prior to the trying to sell it, the property was appraised at nearly $400,000. Due to the 1980’s regulation, the only permissible buyer was the county; so when they went to sell it, the county offered $40,000.

No. I didn’t forget a zero… the county did. Due to that regulation their property dropped in value ten times over.

The Murr family, believed they were owed compensation for the diminished value resulting from a state regulation that rendered their property unusable. This family paid property taxes on each parcel separately, but the state suggested they combine the parcels, making it an all or nothing situation. Either they could sell ALL of it, or none of it, but not either of the two parcels separately.

The SCOTUS ruled in favor of the state of Wisconsin.

The folly of this ruling can be found in the dissenting opinions as well as the concerns expressed in the amicus briefs submitted. It would seem even Wisconsin was a bit short-sighted in their efforts to win this case, because this ruling is federal, which means it holds implications for the states as well. Naturally states and individuals alike want to avoid losses in property value. States no more want to be shorted by the federal government for adjacent parcels than individuals do, and yet Wisconsin does this, jeopardizing the compensation of individuals as well as states in the future.

Here are some highlights from the brief offered by Reason:

If we are expected to have any respect for the law, then the law itself must be both consistent and predicable for the citizenry. The ruling against the Murrs has, as Justice Roberts states, “knocks the definition of ‘private property’ loose from its foundation on stable state law rules, [and] compromises the Takings Clause as a barrier between individuals and the press of the public interest.”

Now it puts the fate of property value in the hands of bureaucrats by allowing them to define what “just” compensation is.

I do, however, want to take a look at that first bullet point for a second: private parties will be incentivized not to have common ownership on contiguous parcels of land, which could lead to “creating other parties for a transaction”.

So rather than the Murr’s owning the two parcels, the parcel with the cabin perhaps would be owned by the Murr’s, and the second parcel would be owned by… St. Croix LLC? It seems that’s the solution here. The only reason why Wisconsin felt justified in merging the two properties was because both parcels had the same owner. They wouldn’t be able to do that if they were two separate owners because essentially they’d be stealing a parcel from one party and giving it to the other.

That a state can regulate away the value of private property by simply deeming it unusable, and gerrymander its way around recognizing parcels they once defined, sold, and taxed as separate is ridiculous. Talk about moving the goal posts!

It used to be that people bought hard assets like land as a protection against sloppy monetary policies. The Fed is recklessly devaluing our currency so get something that holds some value… like real estate! But the truth is, the government has the exact opposite effect of the Midas touch: everything it touches turns worthless.

I won’t go so far as to suggest that property isn’t a worthwhile investment. It very much can be. But like any high ticket asset, protecting it is of the utmost importance. I don’t know how this would have turned out had the parcels been held by two different entities. If Donna had the title to one parcel, and the siblings held the title to the other, would the state have assessed it the same way? I can’t be sure. But it does appear that ownership of conjoined properties by the same entity or person(s) might have been a deciding factor in this case.

Bipartisan support for new bill seeking to further the United […]