SCOTUS makes a ruling that could put an end to civil asset forfeiture as we know it. 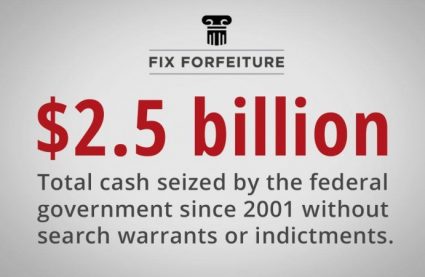 The case had to do with two people who were convicted of a crime and sentenced, but later exonerated. Shannon Nelson and Louis Madden both were charged and convicted of two felonies each, all of which was overturned during their appeals process. (Source: Reason)

The state of Colorado took money from these people, and wouldn’t return it unless they went through the proper channels outlined in their Exoneration Act. Much like how asset forfeiture works, they would have to prove to a court their innocence. This is a very expensive process that could basically consume whatever fund they were seeking.

“Colorado may not retain funds taken from Nelson and Madden solely because of their now-invalidated convictions, for Colorado may not presume a person, adjudged guilty of no crime, nonetheless guilty enough for monetary exactions,” Ginsburg writes. “To get their money back, defendants should not be saddled with any proof burden. Instead…they are entitled to be presumed innocent.”

There are differences. And those differences might matter, so I don’t want to get my hopes too high.

Her opinion could be interpreted narrowly or broadly, like any other Supreme Court opinion. And so now, we wait…

In the meantime there have been some developments. Iowa recently tightened their requirements on civil asset forfeiture.   You cannot seize their assets valued at less than $5,000, unless the owner is convicted of a crime. For assets over that amount, the burden of proof has moved from “preponderance of evidence” to “clear and convincing evidence”. Not sure if that will really help all that much except to say that the first part is definitely in alignment with the SCOTUS ruling.

Idaho is working on getting to where Iowa is. Ohio has come a good distance in getting rid of the “profit incentive” behind asset forfeiture. It bars the practice for under $15,000 and the burden of proof shifts to the government and prosecutors rather than the defendant or their property. That’s a huge deal. Moreover, the Ohio police may not go the federal route of “profit sharing” with the federal Department of Justice, and get their cut that way for assets valued under $100,000.

The Heritage Foundation did a full review of all the various levels of reforms at the state level across the United States, most of which indicate higher thresholds for confiscation, and a greater burden of proof on the part of the police and state. While this is certainly is nice, the practice is almost entirely predicated on America’s ridiculous drug war. In the same way intrusions on our financial privacy is almost entirely predicated on the fear of tax evasion and money laundering.

What is even more disconcerting, is the apparent ignorance the current American president has on the matter. I mean, it’s fairly clear in the American Constitution that property cannot be taken unless the owner is justly compensated (5th amendment), which is somewhat the case with eminent domain; and that property will not be seized without due process (14th amendment).

The last time someone promised “Hope and Change”, we got “Nope and Chains”, so at best I can be cautiously optimistic about this ruling by the SCOTUS. But for those at organizations like the Institute for Justice or the ACLU, who fight against policing for profit, this ruling could be a tremendous boon for the cause.

I hope it never happens to you. The more material wealth you keep distanced from you, the better. Don’t give the litigious or the corrupt police state a reason to think you’re their cash cow. Corporate structuring could offer a layer of protection against this sort of legalized theft.

Russia & China Collaborate to Work Around US Dollar

As the China-Russia relationship continues to grow, so too does […]