The US economy is seeing some shifts in consumer spend and drops in GDP. 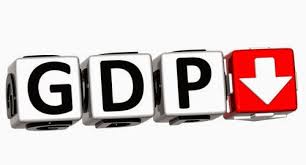 We witnessed a considerable shift in consumer spending habits, as well as a significant drop the US GDP. Consumer spending accounts for two thirds of US economic growth, so when that undergoes any changes – positive or negative – its effects are noticeable.

The shift we are seeing is AWAY from retail spending. This isn’t some phenomenon that just surprisingly turned up in the last 4 months. It’s something that has become more pronounced quarter over quarter.

Throughout 2016 various outlets have observed a drop in retail spending. About a year ago, in fact, there were discussions about the lackluster performance of retail, while other sectors saw improvement or stayed the same.

Consumers are spending. They just aren’t spending at the retailers they traditionally have.

The US has too much retail supply and not enough demand. Basically, the United States over speculated on the retail front, built a lot of malls, and now retailers are reeling it in. It’s not that the shopping mall is necessarily going the way of the dodo, but its numbers need to decrease. So this is a market correction.

Despite the Market Fairness Act, consumers have set their course and made their choice on who they prefer to do business with. The US, like much of the developed world, has turned to online retailers for their retail needs. There’s little point in paying the premium for an unnecessary drawn out experience. Especially for products that are recurring. Look at something like Jet.com. They will home deliver your basic recurring household supplies. Amazon Fresh will deliver your groceries to your door. Green Chef and Blue Apron, among many others, will send you everything you need to prepare a nice home-cooked meal.

But if people are still spending, what explains the shift? 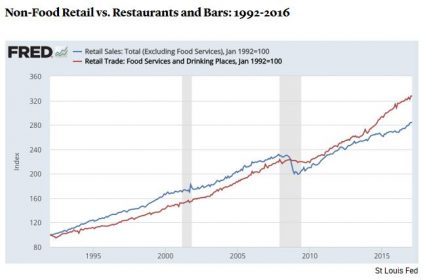 People also happen to be spending their money on experiences rather than material goods. According to US News, restaurants, tourism, recreation and travel have been the beneficiaries of this shift.

Airlines in the United States have seen record numbers of travelers. The US Department of Transportation reported airlines transported 823 million passengers in 2016, which is a 3.1% growth from the prior year.

As for restaurants, the Atlantic made this observation:

“Since 2005, sales at “food services and drinking places” have grown twice as fast as all other retail spending. In 2016, for the first time ever, Americans spent more money in restaurants and bars than at grocery stores.”

It would seem, overall, people are buying experiences over things. This is indeed an interesting phenomenon. Could it be that people are more inclined to buy the concert tickets than the album? Buy the trip rather than the new summer clothes?

Still, despite all this, the first quarter of 2017 underperformed. Economic growth was projected at 1% and came in at a sad 0.7%: the lowest in three years.

The Public Consumption Expenditure index rose a meager 0.23% annualized: the lowest since 2009.

Gas prices aren’t abnormally high. And we are touting a sub 5% unemployment rate! This should translate into a robust market place, but it’s not.

We hit a very low mark on working adults. Currently 62.7% of American adults are working. (Adult is defined as anyone over 16.) You have your baby-boomer retirees, which is expected to be one of the larger waves of retirees in America’s short history. Then you have the younger crowd that is attending university or some higher education. Both of those are somewhat understandable. But then you have group of adults that want to work, but haven’t been able to secure a job in over six months.

There are some who like to claim that wage growth is slow or low. But the fact that there is long term unemployment that no longer counts as part of the overall unemployment number and that part-time employment is still considerably high, suggests that wages might not really be the problem.  The part-time and full-time proportions are nearly identical to what they were in the heart of the recession in 2009. Lack of full-time employment and inflation might be the real culprits.

Here’s the kicker: consumer confidence is the highest it’s been since 2000! So people apparently WANT to spend their money! Will consumers find their answers to this in Trump’s tax plan? It’s difficult to say. He’s increasing the standard deduction, cutting taxes to some extent across the board, but he removed the state tax deduction. (You can check out one synopsis of his tax plan here.)

Before we blame wages, cheap labor and imports, it’s important to consider a few things:

How this will all play out remains to be seen. This is not a problem that needs to be taken out on employers. It’s a problem easily sorted out by lower tax burdens and freer markets in labor and goods.

As for the shift away from things and toward experience, that is something to watch more closely. Retail used to be a key indicator of economic growth and activity, but if it continues to shrink, while other sectors grow, it might just be indicative of a change in priorities in the market.

SCOTUS makes a ruling that could put an end to […]