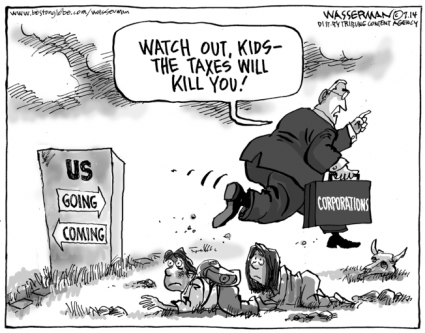 Large corporations are reluctant to repatriate $2.4 trillion to the United States because it still has the highest corporate tax rate in the world of 35%.

According to the Swiss bank UBS, as of the end of fourth quarter 2016, American corporations have approximately $2.4 trillion stored offshore. And of that, Apple, Microsoft, Pfizer, GE, and IBM comprise 20% of that $2.4 trillion figure. Five corporations alone are keeping one fifth of that wealth elsewhere in the world.

That’s a rough difference of $96 billion.

Obviously, there are the finer points of our illustrious 74,000 page tax code I’m not factoring in here, but still. Even if I was off by $40 billion… I’m thinking $56 billion is still worth keeping away from the US Government.

We just discussed the recent slump in consumer spending in first quarter of this year. And while there might be an initial hit to federal revenues, a 15% corporate tax rate would make the US more competitive with other nations in the world. That might lure more foreign investment as well as stimulate existing businesses to invest in their growth or expansion.

Government Gets in the Way of Progress

Anyone who has championed drastic reduction or full elimination of the tax code, or anyone who has advocated for drastic tax code reform in the form of Flat or Fair Taxes, probably was under the illusion that the process required a petition with a certain number of signatures, or a simple majority in Congress.

They would all be wrong. Sadly, I’m among the wrong. I have been known to be quite glib about tax cuts. In true Ron Paul fashion, I want a flat tax… really flat… like zero. Just cut it. Boom. Done. Next.

Alas, we are a nation of rules; and one of those rules is in the Senate. Trump is saying 15% corporate tax rate. Republicans are saying 20%. Let’s go with 20% just to be safe. The Republicans have two choices in the Senate: either get some support from across the aisle, or “reconciliation”. The former is unlikely. The latter would be possible if the Republicans can prove that such a cut would be deficit neutral or at the very least would not add to the deficit beyond 10 years.

A significant cut in taxes for just three years could result in an increase in deficit over ten years, or so the Senate Joint Committee on Taxation found. This is the one time where we can say that EVEN if you have representatives wanting to do this, they would not be allowed to do so.

What an odd rule to have. They don’t seem to have much of a problem raising the debt ceiling and cutting checks to the Department of Defense, or monetize the debt through the Federal Reserve, but when it’s time to give the private sector a break, that’s when they start worrying about deficits?

Remember when the CBO said that Obamacare was going to be deficit neutral as well? The report wasn’t even complete since it was based on partial knowledge of what the bill actually said! It wound up adding a conservative $1.35 trillion to the deficit. 20% of the US economy hanging in the balance, and that was passed via reconciliation.

These government analysis types only look at the numbers with all things being equal. They don’t account for actual market response. They didn’t account for the Healthcare.gov site to come in over budget. They didn’t anticipate the costs of the regulations that lead to a 20% hike in premiums in under 8 years. They didn’t expect the insurance companies to drop out of the market place exchanges, merge, or consolidate.

Same here. They aren’t accounting for any of the economic stimulus that is inherent in tax cuts. They aren’t factoring in the repatriation of wealth. They aren’t considering the foreign investment potential. All they see is businesses not paying as much in taxes. It’s like having your financial standing evaluated, and when they do the debt to income ratio, they only look at the debt, not the income.

The really sad part is that none of the Republicans are offering anything substantive in the way of spending cuts either. While the Senate rule was likely intended to be a form of accountability measure, it fails to do any such thing. If all it takes is some number fudging like Obamacare, then it’s more a matter of reporting creativity and poetic license than sound financial management.

I don’t care one way or the other if the money is repatriated back to the United States. The jurisdictions which have successfully courted that $2.4 trillion deserve to be the beneficiaries if they won the overall tax price war. It’s sad that these are American companies and the United States isn’t benefiting from them because its government is too stupid to get out of its own way.

But a 35% corporate tax rate is nonsense. By every global standard it is nuts. I don’t blame a single one of these corporations for inverting or moving as much as possible offshore.   Honestly, I have American corporate tax rates to thank for a thriving business. That doesn’t mean it doesn’t suck. It does. And if Congress can’t get it together, then I will continue to advocate offshore banking as a very viable solution for both individuals and businesses and continue to help people protect their wealth and assets that way.

The US economy is seeing some shifts in consumer spend […]