Inspector General report finds DEA stole $4.15 billion in cash alone over the last decade through asset forfeiture; most of which is not tied to any criminal investigation. 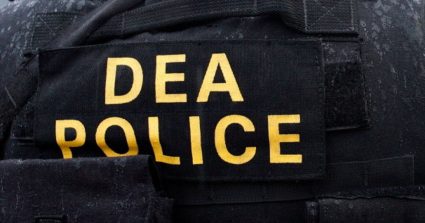 The DEA has stolen approximately $4.15 billion in cash alone in the past ten years through asset forfeiture. This doesn’t include hard assets such as vehicles or real estate! That’s roughly $415 million per year in cash.

Here’s the real kicker: over 80% of those seizures never were connected to any criminal charges.

Darpana Sheth, attorney at the Institute for Justice, rightly points out:

Indeed it is hard to take seriously the arguments defending asset forfeiture when there is little to no evidence that it serves the purpose they say it does.

It’s like saying the TSA protects us from terrorists, while knowing they haven’t caught a single one since their inception.

It’s like saying the military fights to defend our freedoms, while knowing that with every war our freedoms have been chipped away.

“More than a dozen states have passed reforms to civil asset forfeiture in recent years in response to civil liberties concerns, but the practice remains robust in part because of joint federal and state drug task forces, which share forfeiture proceeds through the Justice Department’s Equitable Sharing Fund. According to the report, the Justice Department’s Asset Forfeiture program participants have collected $28 billion over the last decade.” (Source: Reason)

The amount of wealth being sucked out of the US economy through forfeiture, taxation, and regulation alone is enough to create an entirely separate, self-sustaining, first world country.

If only that were the byproduct! What really becomes of this theft are departmental slush funds to perpetuate these policies.

The findings of the Department of Justice Inspector General get worse when they find that most of those executing an asset forfeiture aren’t properly trained on it at all, which means there is little to no consistency in how it is practiced; which is an inevitable by-product when there’s no accountability or oversight either.

Without a doubt, this poses not just a threat to civil liberties, but a threat to property. It’s no wonder that individuals are following the habits of corporations and moving their assets offshore or into corporate structures. Asset forfeiture has become so rampant and devastating, it’s not enough to simply not carry around cash. You can’t keep anything in your name, lest it be confiscated as well!

The Trump Administration will not go down without a fight. The Assistant Attorney General to the Justice Department’s Criminal Division, Kenneth Blanco, has “significant concerns”, and they seem to completely dismiss the civil liberty concerns the report shares as a conclusion to its findings. That a mere spot check of this practice lead to such disconcerting findings, indicates that the report is probably a much nicer reflection of the program than what is actually happening.

Honestly, the report still defends the practice which is far more forgiving than I would be. I condemn the practice outright in the exact same way I condemn taxation. It’s all theft. The report merely called for more accountability and uniformity in practice. But that’s not enough for the Trump Administration.

Blanco dug his heels in deep on the matter of asset forfeiture being an essential tool for law enforcement’s war on drugs. His concerns seem to be with how accountability and proper training could impede the layers of law enforcement.

My question is: when did our civil liberties become disposable for the purposes of making it “easier” on the police to take our assets? Didn’t realize that when you took an oath to uphold the constitution you only swore to everything BUT due process!

The extent to which the practice of theft should be allowed is still up for debate, apparently. Right now, all we have is a recommendation from the Inspector General; but it is interesting to see interdepartmental spats unfold. The Inspector General’s office had a two-fold response for Blanco:

“[T]he Criminal Division’s comments on our report indicate that it has missed a key point: regardless of the importance of the tool, it must be used appropriately, with effective oversight, and in a way that does not place undue risks on civil liberties.”

“[T]he Department has an increased responsibility to protect civil liberties when its investigative components use a tool that permits seizure and forfeiture of property without judicial involvement or apparent connection to investigative activity, and then uses the proceeds of that property as a funding mechanism for law enforcement operations.”

This due process work around where private individuals are forced to prove the innocence of their assets is fundamentally broken. That the majority of these cases had no criminal investigation ties to them, nor were the seizure amounts over $100,000, indicates that asset forfeiture isn’t being used to nail the sharks and kingpins of these criminal enterprises, but rather used as a shake down method for law enforcement while lining their pockets with additional revenue.

Profit incentive is great in a voluntary free market situation. It promotes quality and added value; all wonderful things begotten of competition and choice. It is, however, disastrous in a government situation where the state has a monopoly on violence, and injustice is rewarded handsomely in treasure and careers. Whether it’s ticketing, asset forfeiture, or prisons, it makes the general population all potential victims of the state for profit.

As mentioned earlier here and incessantly throughout my other blogs, there is a reason why people store their wealth offshore or in trusts and corporate structures. Pundits and political blowhards like to make this about tax avoidance – and they aren’t entirely wrong. But there’s SO much more protection than just that. Protection against litigation and asset forfeiture are also among the benefits of internationalizing your assets, or at the very least diversifying where and how you store your wealth. There’s nothing criminal about protecting what’s yours.

With $2.4 trillion in wealth sitting in offshore accounts, the […]