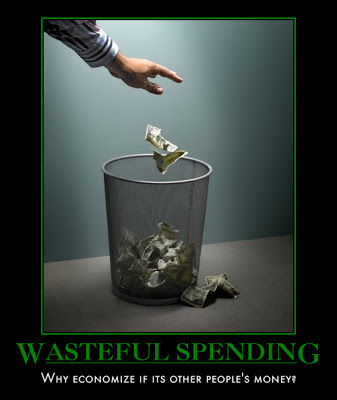 American taxpayers are paying for broken government polices from student loans to prisons. As it turns out, people with no plan or collateral are lending liabilities. Who knew? Likewise, it is a greater burden on the economy to imprison people for drug possession and dealing than it is to just leave them alone. Go figure.

While those things might not come as a surprise, the numbers behind them both puts these two problems into perspective.

When you apply for a student loan, you don’t need a source of income. You don’t need a plan. You don’t even need to declare your major. The assumption is that the student loan is a worthwhile investment into the education of the borrower. That any educational endeavor will be lucrative enough to reimburse the costs of that endeavor.

That’s a lofty talking point among advocates of government funded or backed education at any cost. Here is the reality:

The US Department of Education pay debt collection agencies nearly $1 billion annually to help borrowers get out of default and arrange a manageable and regular monthly payment plan. However nearly 40% of them defaulted again three years later.

“Debt collectors receive up to $1,710 in payment from the U.S. Department of Education each time a borrower makes good on soured debt through a process known as rehabilitation. They keep those funds even if borrowers subsequently default again, contracts show.” (Source: Bloomberg)

The Department of Education defines loan rehabilitation as agreeing to the following:

The payments can be as low as $5 per month for qualified applicants, and people are still defaulting again after their 10 months are up. So even if these borrowers don’t default again, if the collectors are making $1,710 per rehabilitation, and the borrower is paying $5 per month, it will take 342 months to make that money back at that rate. Over 28 years to make back the money spent on the collector? What about the money for the loan itself?

When all is said and done, taxpayers are paying $38 to collect $1 in student loans. I won’t go so far as to say college education is a losing proposition. But the student loan program most certainly is. That the productive individuals must pay to collect certainly goes a long way in demonstrating that all degrees, borrowers, and students are not created equal.

Much like the prison system, taxpayers are footing the bill for failed policies that serve no actual beneficial purpose. Taxpayers don’t benefit from collecting on student loans. And they don’t benefit from incarcerating people for victimless offenses.

1 in every 100 Americans is serving a prison sentence. Meanwhile, Jeff Sessions is doubling down on mandatory minimums and the drug war in general. Mandatory minimums are the reason we have quadrupled our federal prison population in the past 35 years. American taxpayers pay nearly $5.8 billion per year for this, or just over $30,600 per prisoner per year. That’s a job. That’s a university education. That’s so many better things than incarceration.

The state level annual average is slightly higher at just over $31,200 per prisoner per year. That takes into account New York at just over $60,000 per inmate and Kentucky at just over $14,603, and every state in between. All in, that’s $39 billion per year in state prison spending.

The above assumes general population incarceration, by the way. Solitary confinement, which is about 80,000 to 100,000 inmates, costs about $75,000 per year.

With nearly $45 billion a year in prison spending and rising, what are taxpayers getting in return? According to findings back in 2011, it was reported that nearly 86% of federal inmates were serving time for victimless offenses. Again, what are Americans getting in return for this?

If you think that correction officer benefits are included in the costs for prisons, you would be mistaken. There’s another bill for that entirely. A $4.25 billion bill to be more exact:

Then there’s the cost for inmate healthcare which comes in around $7.7 billion. And finally, there are prisoners over the age of 55. They will eventually comprise 1/3 of the prison population by year 2030. They cost $16 billion.

The United States is not only home to the highest incarceration rate in the world, it is also responsible for one of the most expensive prisons on earth: Guantanamo Bay. There are currently 41 inmates being held there. Back in 2015 there were anywhere from 107 to 122 inmates there, and the documented annual cost for that year was $445 million. That means we spent $3.65 million to $4.16 million per inmate that year.

We are hemorrhaging tax dollars here by the billions. Private prison and private debt collection cronies are the only beneficiaries of these multibillion dollar policies. We aren’t any more solvent and we aren’t any safer.

While people complain about offshore tax avoidance, suggesting that if they paid in, it would be spent on noble things like healthcare and eradicating child hunger. Nothing could be further from the truth. Every cent that is kept out of the pockets of government coffers, is a cent not wasted on black hole projects like American prisons and student debt collecting.