The Inflation Reduction Act seeks $30.5 billion in new tax revenue from those making less than $500,000 as the US economy spirals toward stagflation. 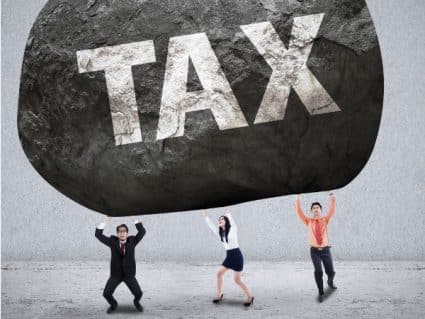 In another “shocking but not shocking” moment…

U.S. President Joe Biden has broken one of his campaign promises and now finds himself among a long list of politicians from both sides of the aisle who’ve reneged on the promises that got them elected.

In this case, Biden “flip flopped” on his promise that he wouldn’t raise taxes on anyone making less than $400,000 per year during his Presidency.

I’m referring to Biden’s Inflation Reduction Act, which actually doesn’t reduce inflation at all. In a twist of Orwellian newspeak, the new bill actually pours more money on the problem of red-hot inflation.

Can injecting more money into the economy solve the problems caused by too much money in that same system? I’m no rocket scientist, but I’m going with NO, it cannot.

And let’s face it, unless you have the inside scoop on some cheap gasoline, you’re paying more at the pump in the U.S., and trips to the grocery store are getting more expensive every week.

But the worst part about the Inflation Reduction Act is that it’s likely to leave the U.S. taxpayer footing the bill for Biden’s blunders during the first 20 months of his term.

“Trying to Sell the American People a Bill of Goods”

Senator Mike Crapo put it this way: “The more this bill is analyzed by impartial experts, the more we can see Democrats are trying to sell the American people a bill of goods.”

The nonpartisan Joint Committee on Taxation (JCT) analyzed the legislation, and published a handful of interesting findings that Newsmax reported:

From these findings we can assume Biden has decided to “flip flop” on his initial campaign promise not to tax people making under $400,000 per year.

It’s just another in a long list of reasons that growing your income under the Biden presidency has been getting more expensive as time goes on.

I mean, I’m never optimistic about who’s occupying the White House, Republican or Democrat, but Biden really is outdoing himself in his effort to win the title of “Worst President Ever.”

However, it’s not all bad news. Thankfully, there is a way to keep your money a lot safer, and out of the reach of any politician who wants to play politics with it…

While Politicians “Flip Flop” And Break Their Promises, Make Sure You Do This…

When politicians from either side of the aisle “flip flop” on their campaign promises, that can end up being a huge threat to both your privacy and your wealth.

That’s why I strongly recommend you safeguard your money before they try to put their grubby little paws on it..

P.S. Who knows when the next politician will “flip flop” on their campaign promises, or how much it could cost you when they do? That’s a great reason to have some of your assets tucked away in a safe place…

Economic Healing Through Honesty: What is Inflation

Politicians obfuscate about what inflation is, once again kicking the […]