Under Biden, IRS Budget Could Grow by $80 Billion

Under Biden, IRS Budget Could Grow by $80 Billion

The Biden administration is looking to expand the IRS to focus on auditing small businesses and people earning less than $200,000 per year. 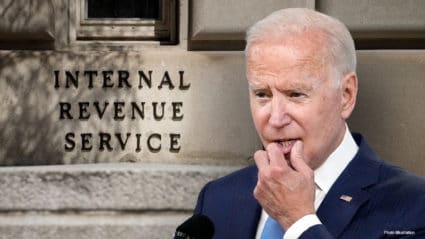 I’ve addressed Biden’s “tax crackdown” in a previous message. I’m afraid that message didn’t quite cover the gamut of his ruthless pursuit of tax revenue from U.S. citizens.

Perhaps emboldened by the Democrat majority controlling the federal government, Biden is continuing his quest to trample on the rights of Americans. He’s calling for the addition of 80,000 more “tax cops” to enforce audits and collect revenue from already-struggling small business owners.

The cost to U.S. taxpayers: $80 billion over ten years, with $45 billion focused on doubling the number of audits conducted on small business owners.

Reason magazine recently called the IRS a “federal bureaucracy with a long track record of flouting due process and undermining privacy.” From the article:

“It’s a systematic practice at the IRS to violate due process and to abuse taxpayers,” says Isabelle Morales, a policy specialist for Americans for Tax Reform, a conservative nonprofit that opposes tax increases. Biden is proposing to boost funding “for an agency that needs reform,” Morales tells Reason, “and that will only lead to us fueling their bad practices.”

Fueling a federal agency’s “bad practices” doesn’t sound like a good idea. But earlier this year Biden had already proposed legislation that would allow the IRS to peek into bank accounts, so this latest news comes as no surprise.

So how would the $80 billion be spent? More than half the money would go toward hiring 87,000 new IRS enforcement agents.

Just to give you an idea of how large that number is, 87,000 agents would exceed the capacity of MetLife stadium by more than 4,000 people.

Just imagine an entire NFL stadium full of greedy little accountants sharpening their pencils and deciding who to audit every week of the year. It’s enough to give you nightmares.

But the expansion of IRS audits might not even be the worst part. Another $105 million would be spent on hiring regulation writers who would spend all their days scheming up new regulations with which to torture and extract wealth from small business owners.

And you can forget about the nonsense that these audits and regulations would only target the rich. According to Congress’ Joint Committee on Taxation, 78% to 90% of collections made under the new law would come from those earning less than $200K a year. In other words, the middle class will get royally screwed (again).

Thankfully, Biden’s legislation doesn’t appear that it will become law, at least not immediately. But Biden doesn’t hide the fact he is pursuing total financial surveillance of every single American, both rich and poor.

And unless something big changes in the next couple of years, it feels like it’s only a matter of time until Biden’s IRS “snoop troopers” come knocking. Which means you should start preparing an exit plan before that happens.

The Secrets for Preparing a Solid Exit Plan

During that time, I’ve also learned dozens of valuable lessons about how to maintain my independence free from authoritarian governments, agency snoops, and IRS auditors.

On top of that I’ve learned the secrets to obtaining a second passport as fast as possible, in “safe” countries free from overreaching government bureaucrats. All done legally yet “under the radar.”

Why should you seriously consider this (besides not wanting to get stuck in a tyrannical country)?

Most importantly, you’ll learn about legal tax avoidance loopholes that can protect you from “unrealized income” taxes or any other taxes politicians dream up.

P.S. The snoops at the IRS might just get the funding they need to make your life in the U.S. a living hell. Here’s how to build an emergency “escape hatch” where they can’t look…

Become a GWP Insiders member today to discover how to keep your income safe, along with many more secrets to secure your freedom…

The digital nomad lifestyle is catching the attention of industries, […]