US Interest to Exceed Military Spending in Ten Years

US Interest to Exceed Military Spending in Ten Years

US annual interest set to exceed military spending within ten years due to reckless and unbridled spending. 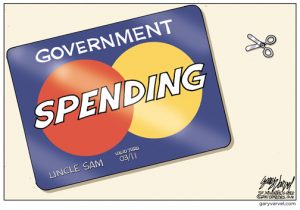 A little over three years ago, we published a blog called “Top Heavy Economy” in which a rather shocking reality was discussed: “Government employees outnumber manufacturing employees by nearly 2 to 1.”

Government employees produce zero wealth. They are an economic black hole, and they outnumber the manufacturers 2:1. That’s is a shameful testament to US economic policy at every level of government.

Fast forward to 2018, and in that same tradition, military spending exceeds half the federal discretionary spending, and as of August 13, 2018 has nearly hit tie $900 billion mark at $892 billion for the 2019 budget. Three years ago, military spending was the third largest expense on the federal budget after Social Security and Medicare. Now, it’s only second to Social Security and has reached the highest level of spend in American history at over $30 Billion more than Obama’s spending in 2011.

The typical Keynesian maneuver is for the government to borrow during the hard times and save during the more prosperous times. But that’s not what’s happening here. The US deficit is expected to hit the $1 Trillion-mark next year. The excuse for hitting that mark the last time was recovery from the 2008 financial crisis under GW Bush.

The federal government cut taxes, and federal revenues are UP:

Let’s not talk like the government is getting LESS money due to tax cuts. That is a very incorrect premise. Tax cuts historically have helped bolster tax revenues for government. Where people often get it wrong is they assume the proportions will remain the same if taxes are increased. So, if a 20% corporate tax rate generates X, then a 25% corporate tax rate would generate 5% more. No.

All these projections are likewise based on all things being equal as well. It assumes the same low interest rates and no additional borrowing per Zerohedge:

“Another problem is that this rate is artificially low as it reflects historical funding cost as the average 10Y yield for all of 2017 was close to 2.3%. Compare that to current yield of 3.23%, which is already 39% higher. With sharp rate moves higher across the curve, every incremental auction which will roll over debt into a much higher cash interest expense.

“And that assumes no incremental supply, which of course is false: already the US Treasury plans to borrow $770 billion in the second half of 2018, a 60% increase from the same period last year.”

The problem is spending. It has always been spending. The climbing interest on the debt has to do with spending.   And while partisan hacks will come up with the most diabolical assessment of their counterparts, the truth is: no one wants to give up their pet projects.

What is exacerbating the problem of spending, but it’s unto itself an economic problem, is the “QE Unwind” which started around October 2017.

What does that mean? It means, believe it or not, there is someone over at the Federal Reserve who is trying to correct course on all the Quantitative Easing that took place in the past administration. The Fed is looking to shed securities. More specifically: “Treasury Department redeemed them and paid the Fed $19 billion for them. The Fed then destroyed this money – in a reverse process of QE when it created this money with which to buy securities.”

The effects of this will be felt from Wall Street to Main Street. According to Zerohedge:

The Fed has been raising rates to where Wall Street is starting to squeal. But Fed Chairman Jerome Powell says, ‘We’re a long way from neutral at this point.’”

It also means that borrowing money just got more expensive. So people who were looking to buy homes, or other large ticket items will have to reconsider what that entails for their monthly payments. It might be that people will need to come with more money down. It might depress the cost of high ticket items altogether.

Powell isn’t wrong to be hiking interest rates and putting more value behind the US dollar while shrinking Fed assets. In fact, I applaud his efforts to get the Fed OUT of the housing industry entirely by unloading mortgage backed securities.

This corrective action at the Federal Reserve is a remarkable act of courage.

The tax cuts remain a fantastic thing for the United States and will ultimately lead to more prosperity for everyone.

Here’s a few highlights of what happened in 2017:

The idea that greedy corporations are to blame, or that the government isn’t taxing enough is preposterous. It’s time to reel in the spending in a big way. In the same aggressive fashion as the Fed is hiking interest rates and rolling off assets.

Brett Kavanaugh is both a lesson and a warning when […]